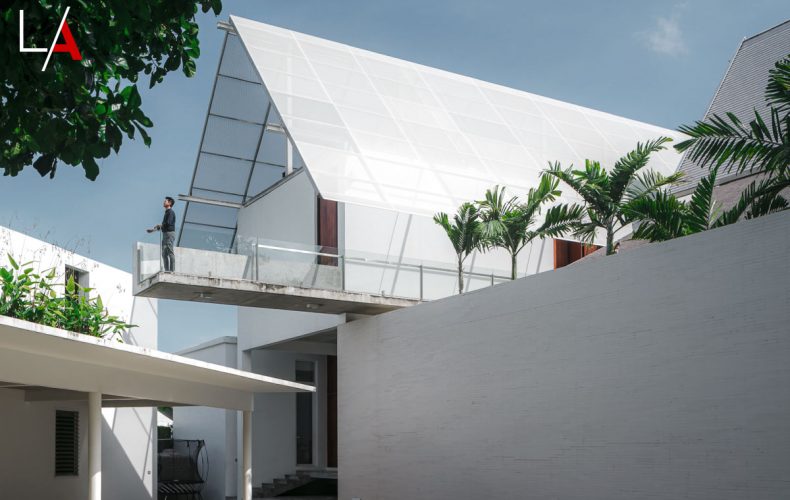 One wing is a semi-outdoor living space roofed over with ceramic shingles in a timeless shade of white. It’s made almost entirely of wood with a balcony and the Thai-style underfloor space high enough for additional uses. The other wing boasts the stylistic characteristics of the postmodern era. To make the most of natural light, the external walls are made of glass. Upstairs a straight passageway connecting individual rooms leads to a cantilevered addition that extends 6 meters supported by a V-shaped steel rigid frame – an unusual approach to lightweight house design. 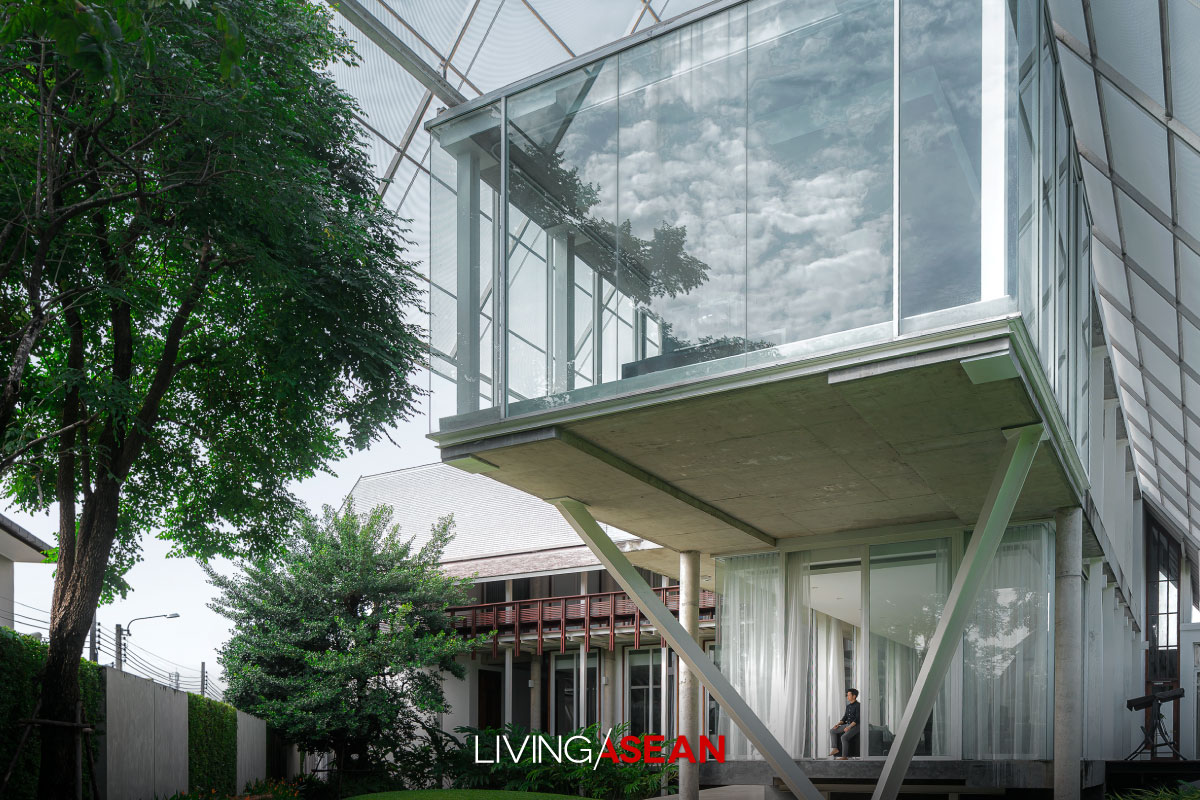 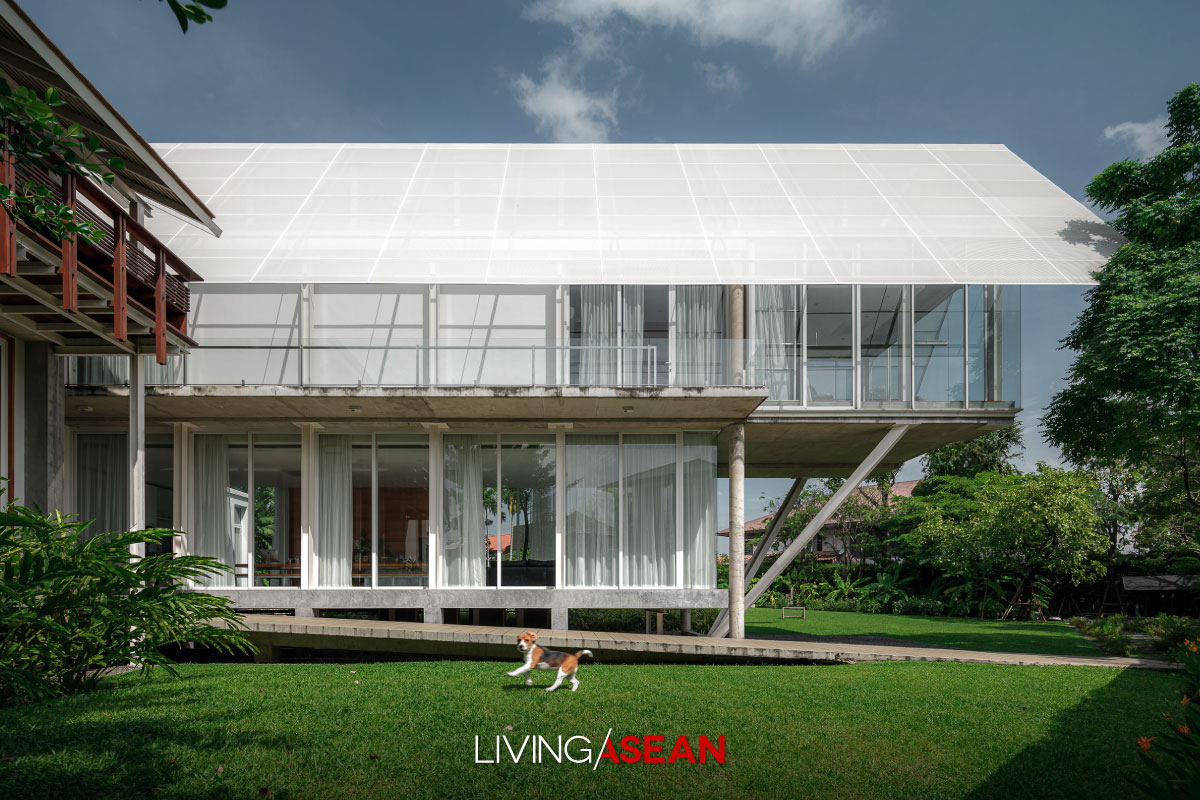 The upper covering of a living wing is made of steel reinforced concrete slabs. The gable roof that rises above them is topped with corrugated aluminum panels to allow light to pass through. This keeps the modern tropical home well-lit by day and glowing with light and color by night. No wonder they call it “Baan Hing Hoy”, literally translated “Fireflies House”.

A piece of architecture representing the nexus between Eastern and Western cultures, Fireflies House is a design that merges Modern and Traditional in a tropical home. The house plan doesn’t sit parallel to the road in front of it. Neither does it align with property boundary lines. Rather, it’s designed to respond to wind direction and the sun’s path across the sky. That pretty much summarizes the design concept embraced by two assistant professors, Pirast Pacharaswate and Sayanee Virochrut, of EAST Architect. The design duo prides themselves on being “architects of tropical rainforests”. 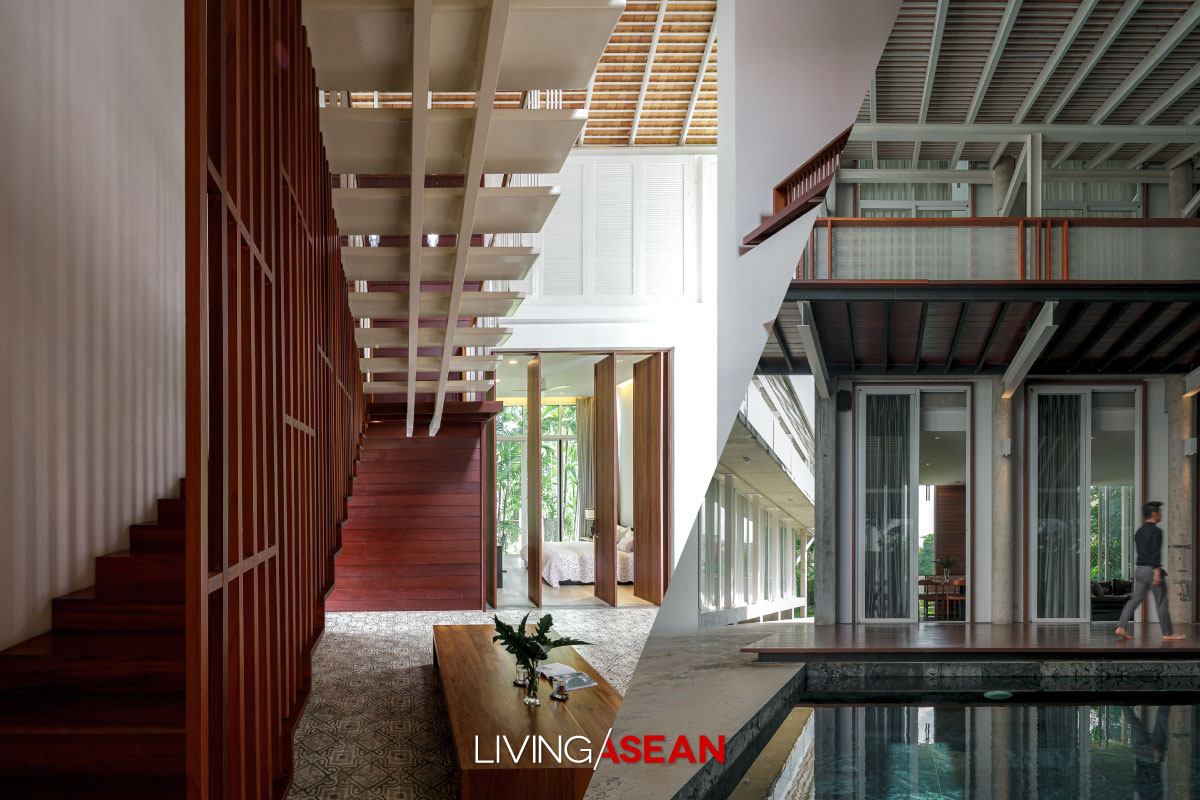 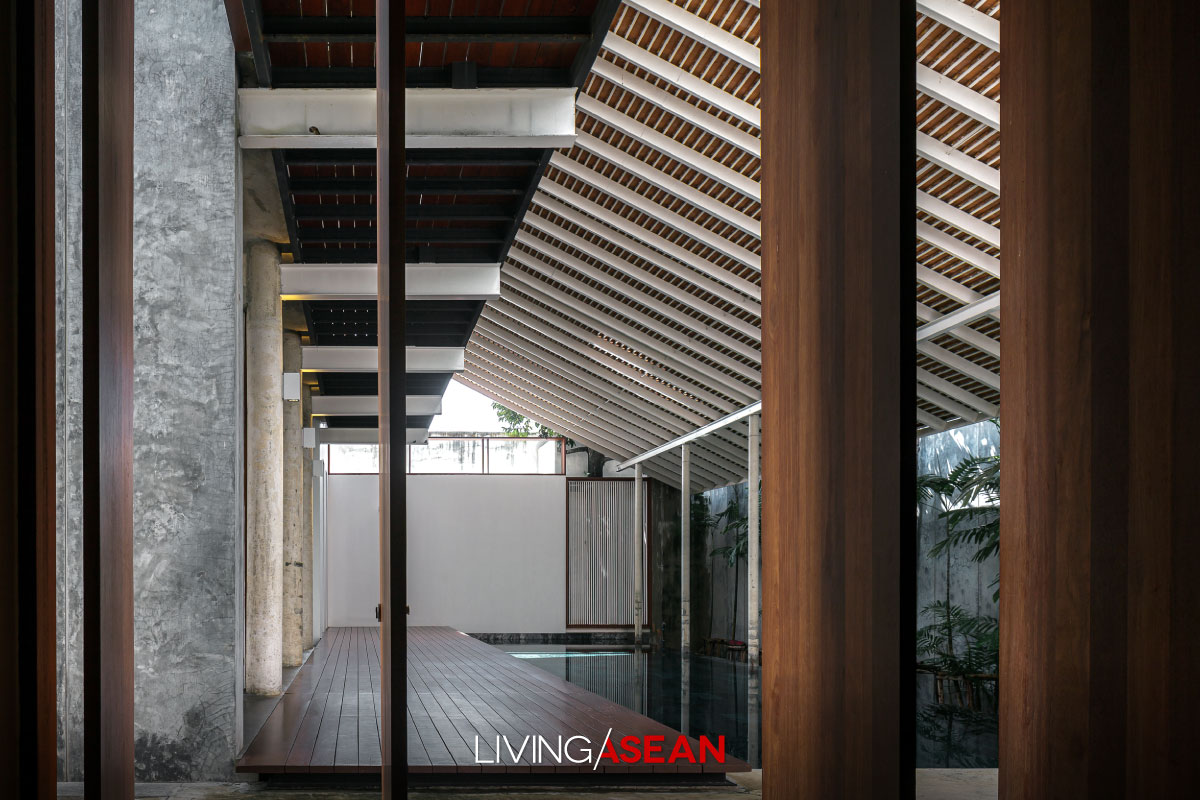 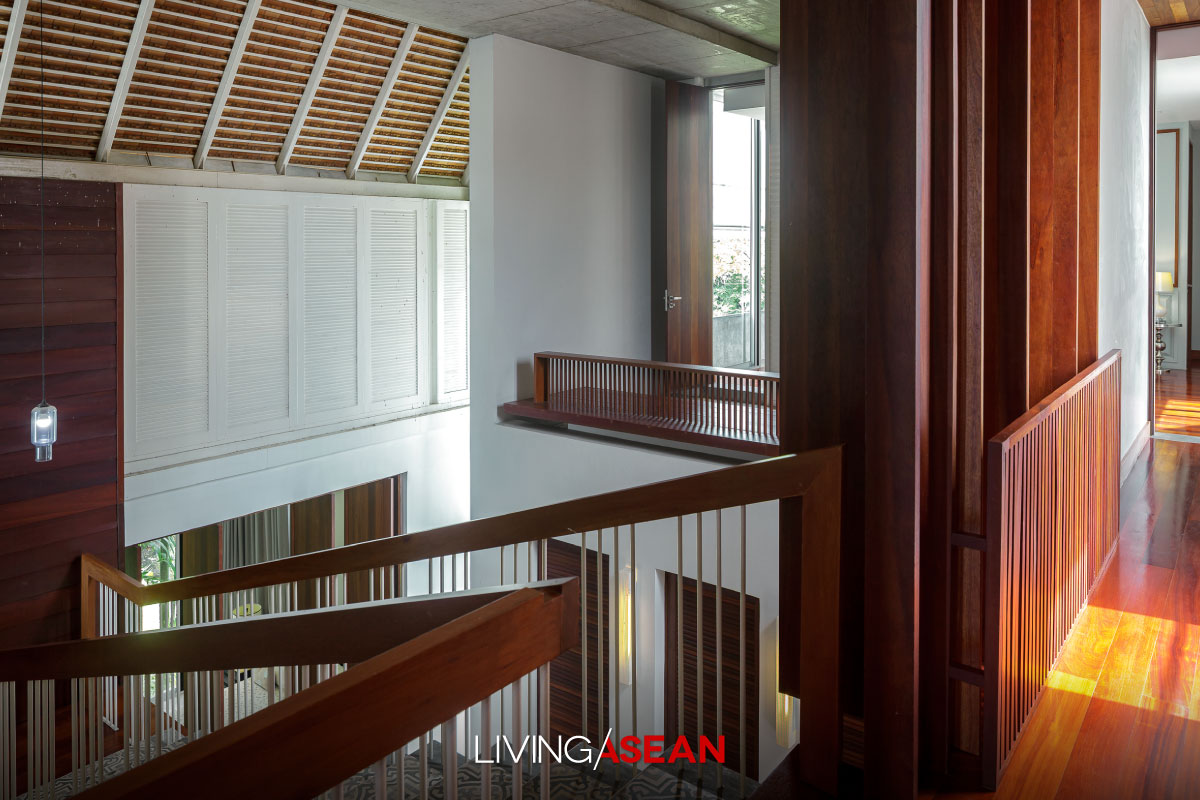 Together they turned a wish into reality. The homeowner, Mr. Thanawat Yongsanguanchai, wanted to build a house for a big family, a place to spend more time in nature. He was looking for a light and airy house plan, one that’s comfortable without air conditioning. The architects responded by using a lot of natural building materials. The result was a well-thought-out design that made people feel as if they were tunneling their way into another world hidden at the rear of the property. 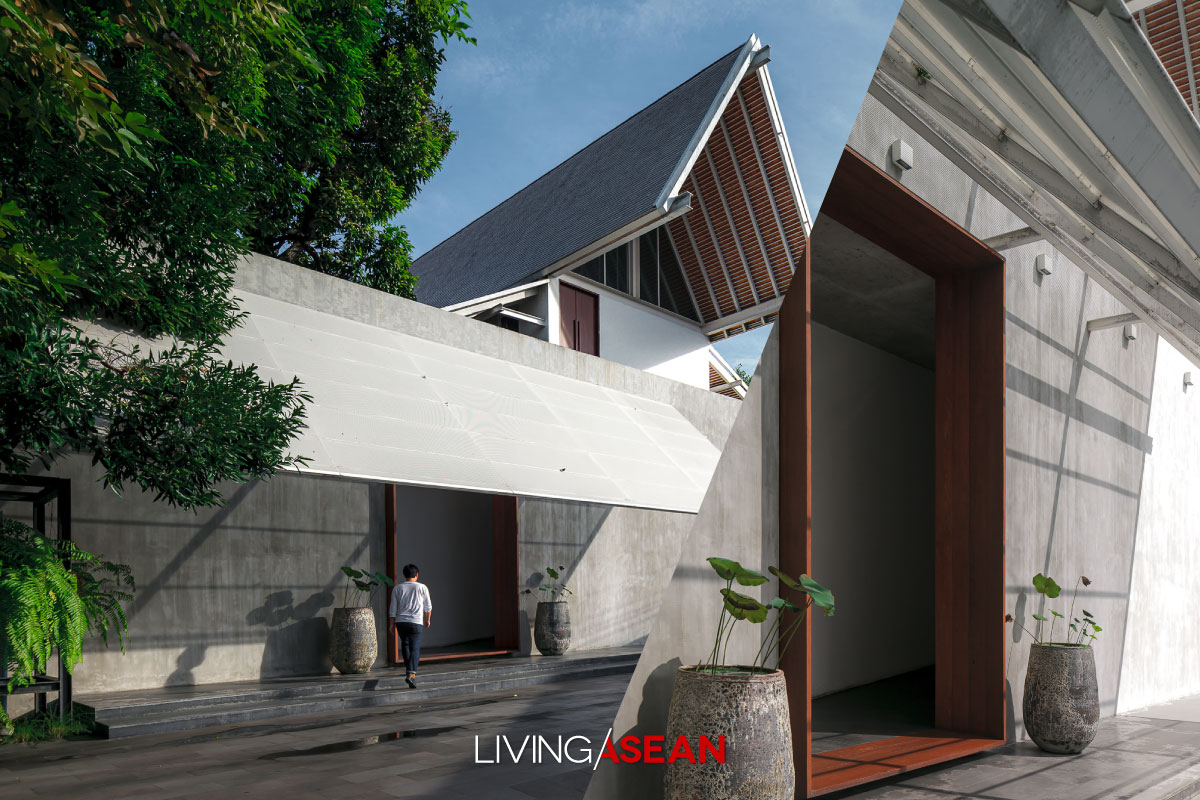 “In essence the design takes into account basic human needs and the culture in which people live. The relationship between culture and climate is one of the inevitabilities of life. It’s for this reason that the house is built with knowledge of the climate in mind,” said architect Pirast Pacharaswate.

“We think up contradictory thoughts when designing the duplex house plan. The kids belong to a new generation, but their living wing boasts certain features that are characteristic of traditional Thai style. This is contrary to the design of the parents wing, which is evidence of a new language of architecture. It sits under a roof that glows with light and color, which bespeaks the postmodern discipline of art. The upper covering of the parents wing is made of steel reinforced concrete slabs. The gable roof that rises above them doesn’t function as roof in a proper way.”

“It’s our intention to present a Thai-style house under the gable roof that many consider as old-fashioned. So we use a modern building material instead. The result is a roof that’s topped with corrugated aluminum panels. It looks light, airy and very noticeable with an entirely new perception.” 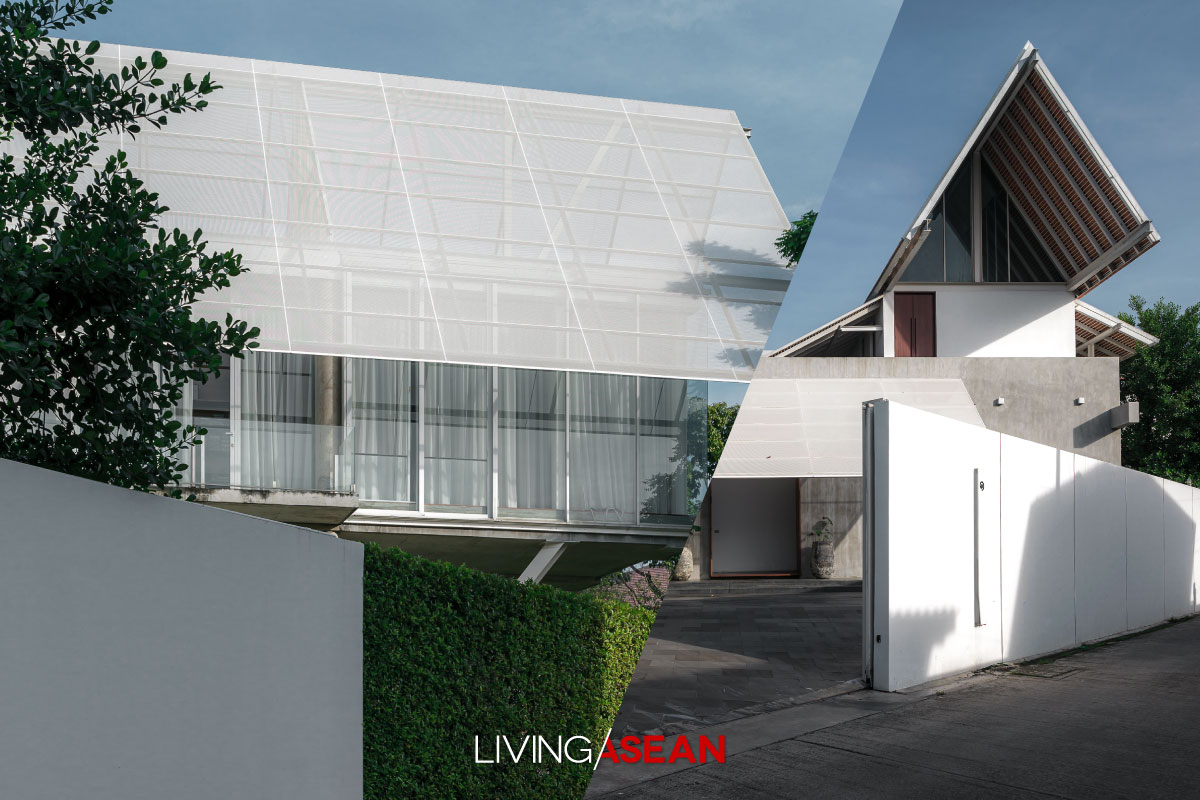 “We learned through conversation that the homeowner preferred white, and responded with a house plan in shades of white. The children’s wing gives a powerful impression of being Thai. It’s protected by ceramic roof shingles in the lightest shade. Wood is the main building material here. Although metal is part of roof framing, the skill and craftsmanship is Thai style. The living spaces are linked by a roofed platform along the outside of the house, unlike the parents wing where spaces are connected via corridors that bespeak modern design.” 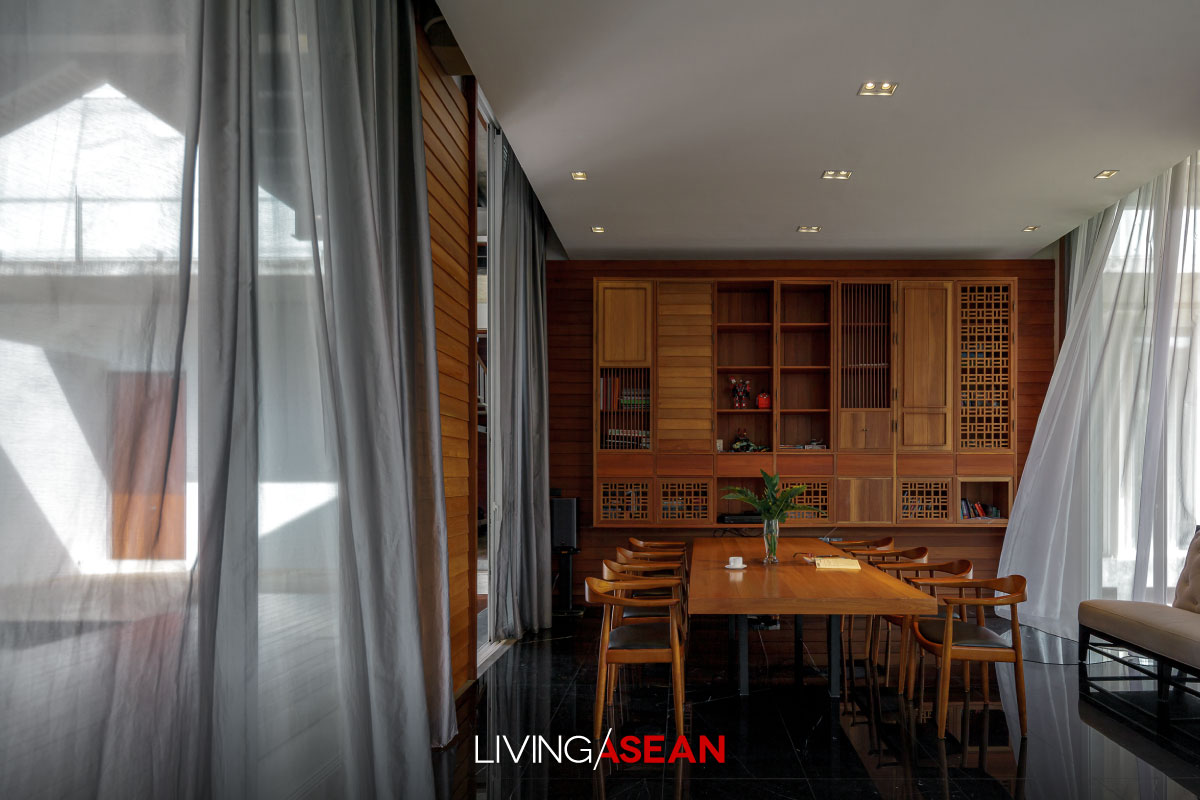 The children’s wing is designed for semi-outdoor living, thanks to the veranda and spacious Thai-style underfloor spaces. Proceed to the parents wing, and you come into a glass-enclosed room that’s a great way to bring the beauty of the outdoors inside. A straight corridor connects individual areas and functions reminiscent of Western-style house plans. 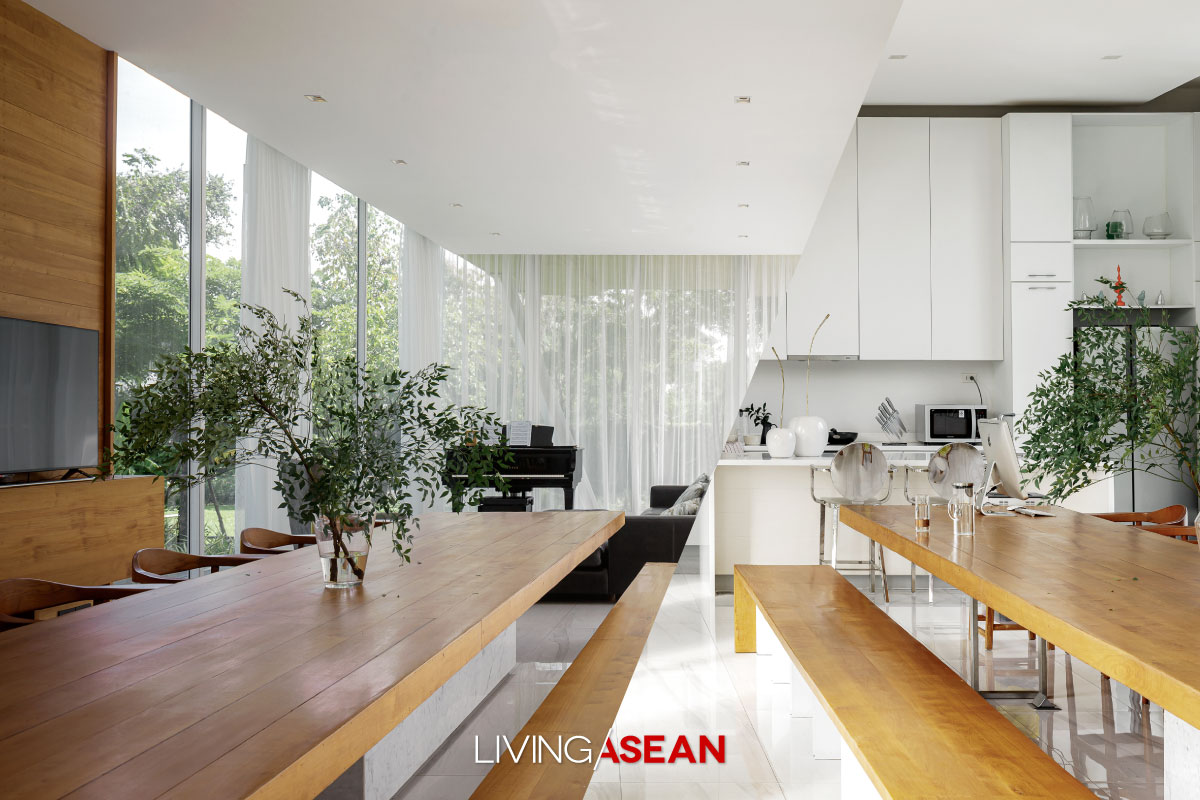 The ground floor has pantries and a dining area with sitting room. It’s dominated by a long dining table that’s custom-made. The upper floor contains mom and dad’s bedroom that projects horizontally into space. Glass walls pour natural light into the room that’s embraced by nature.

There’s a multifunctional room with wood décor ideas. An array of alternating plain and hand carved wood cabinets ooze the charm and poise of Thai style. 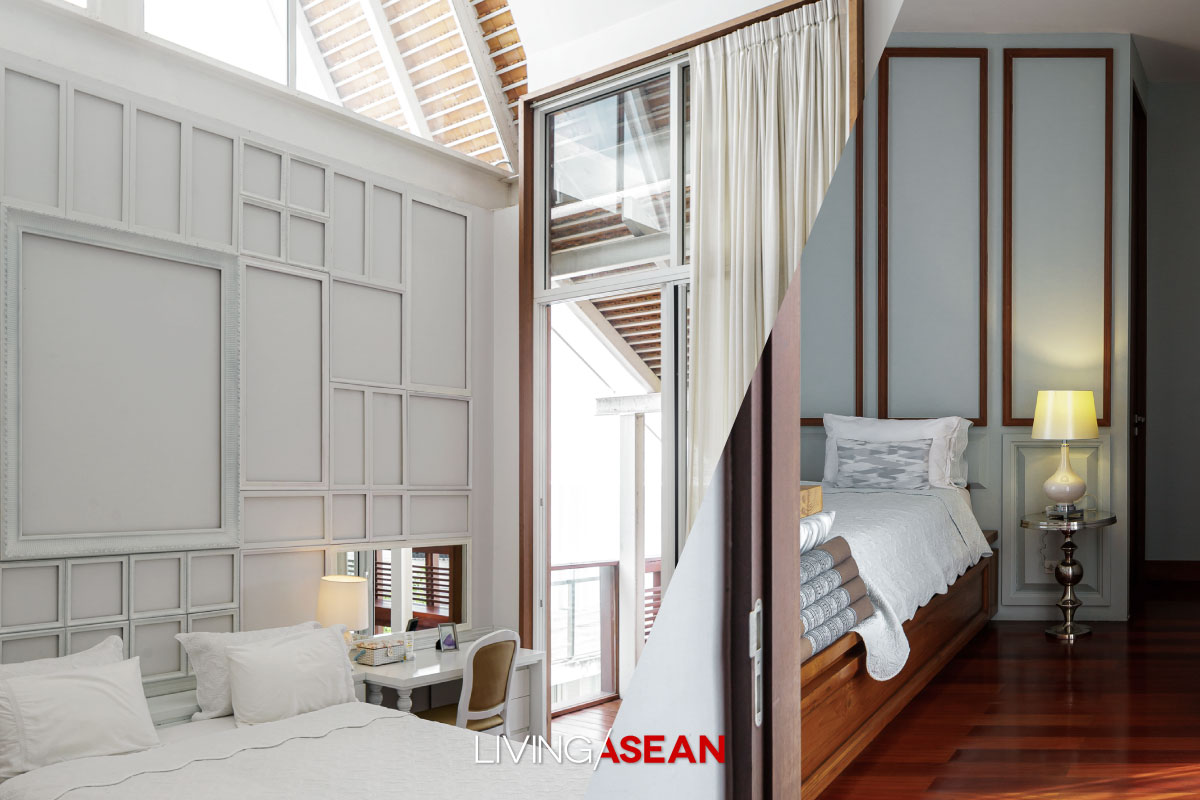 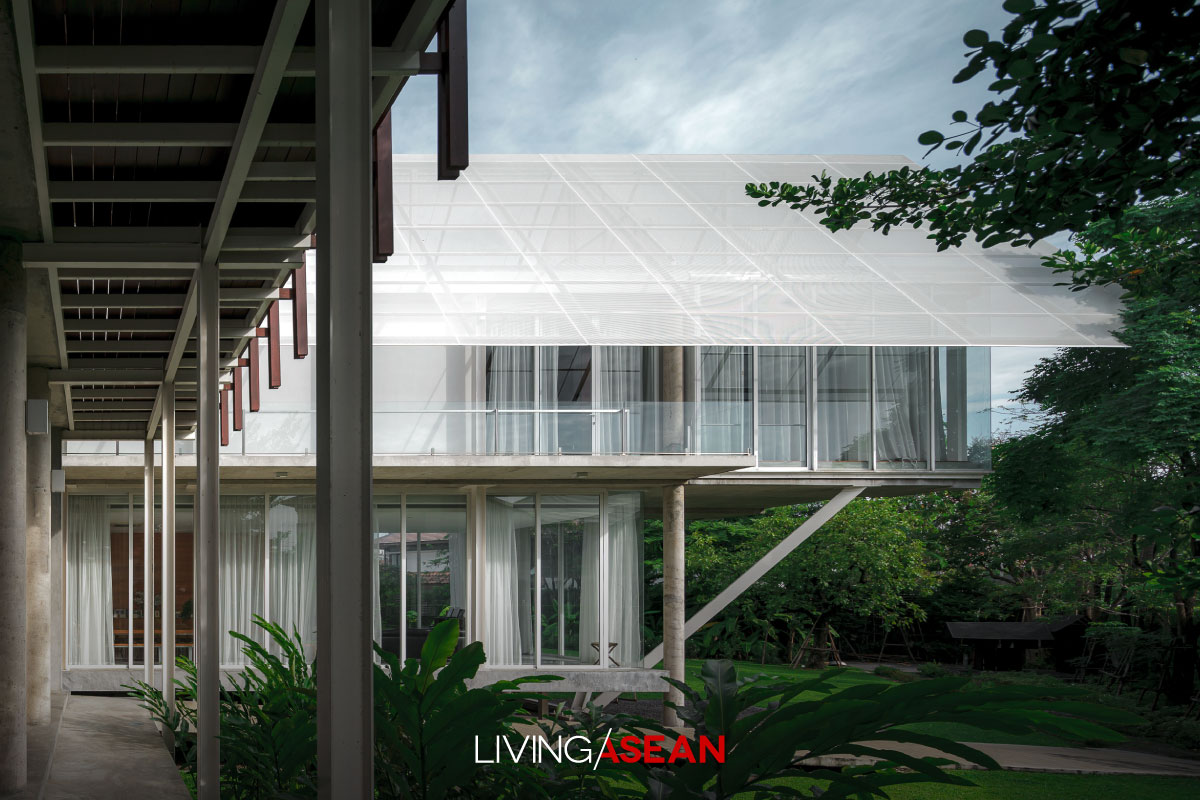 The upstairs bedroom projects 6 meters into space, supported by a V-shaped steel rigid frame for a lightweight look. Floor-to-ceiling glass wall systems afford views of the landscape. Not all ceilings are horizontal. Above, the children’s bedroom boasts a ceiling that slopes in agreement with the gable roof. The front side under the gable is open to bring natural brightness inside, while accent wall ideas behind the headboard fill the room in style. There’s something quintessentially Thai in the other bedroom where the platform bed frame is wider than the mattress, an easy hack to create space for wedge pillows and the triangle pillow that’s unique to Thai culture. 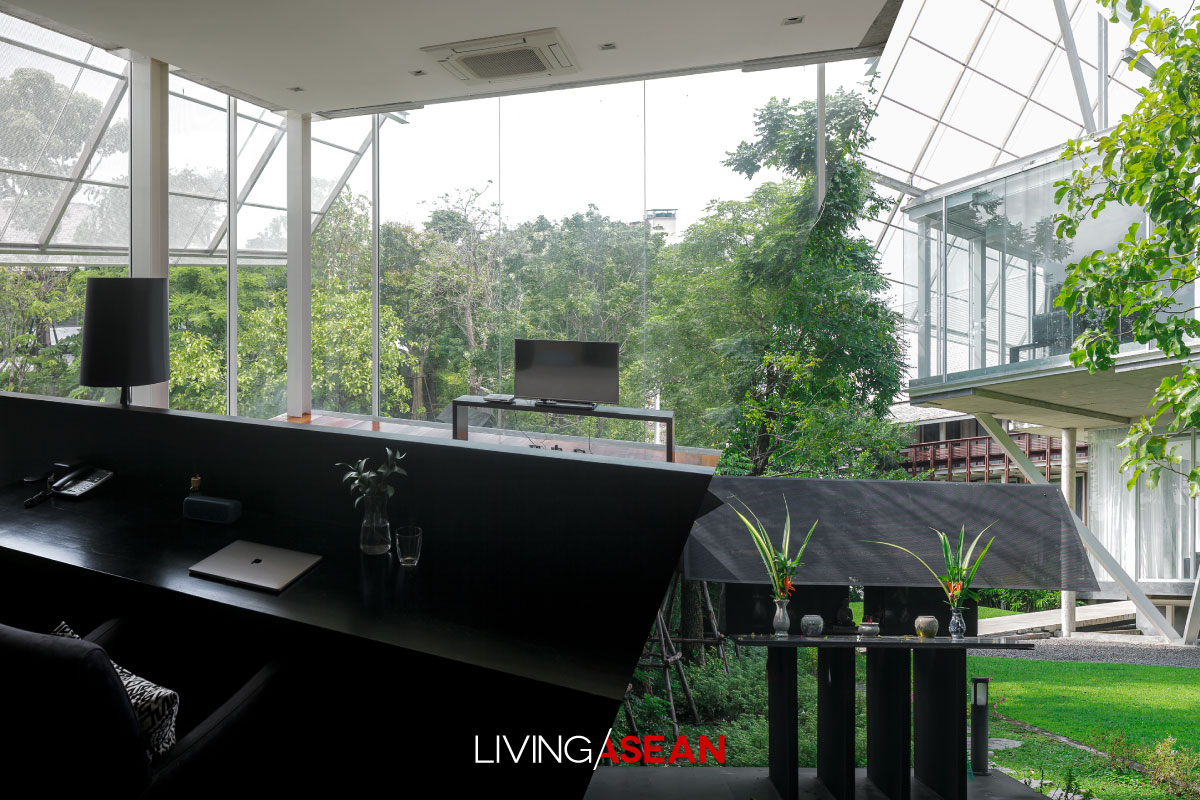 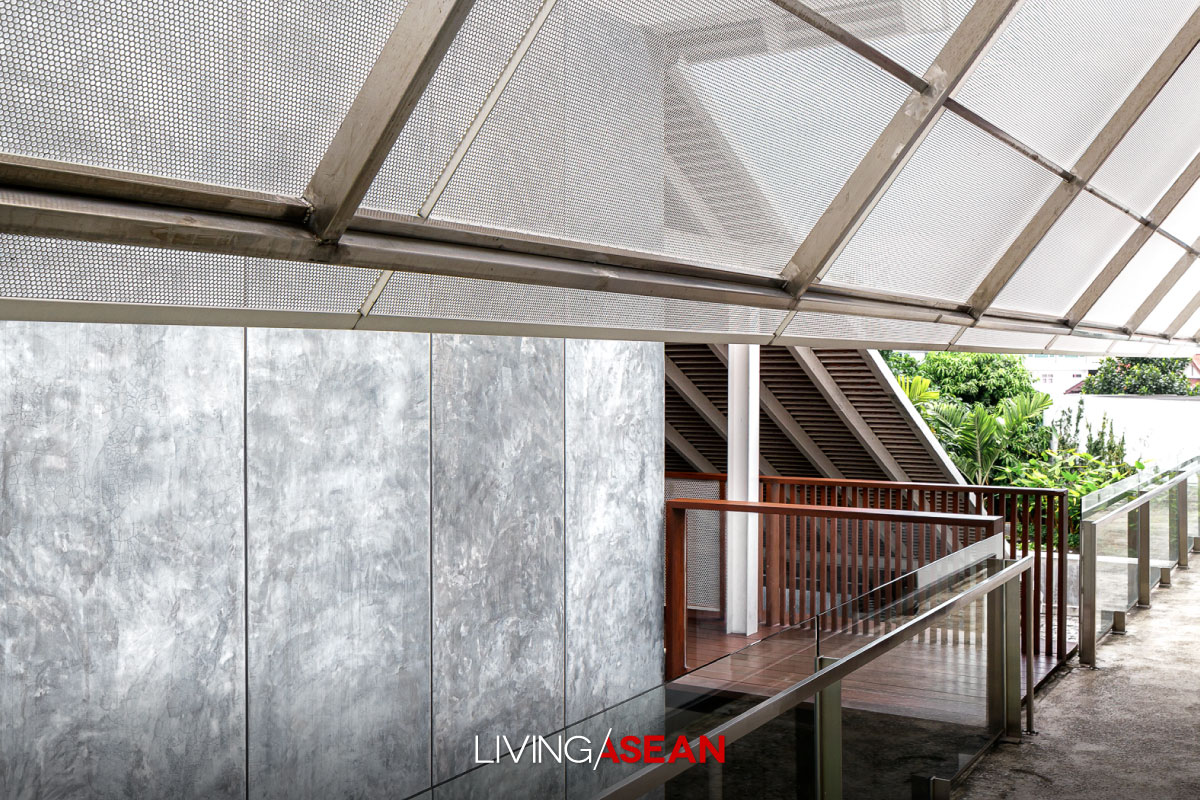 “To create a good first impression, an architectural space has to be a noticeable new phenomenon. Hence, a garden passageway is designed for people to recognize what’s unique about ceramic roof shingles as they approach the house from various distances, each resulting in different impressions. Psychologically, humans and architecture interact with each other all the time. Circulation, or human movement in and around a piece of architecture, constitutes an interaction. It’s interactive experience that creates an awareness and evokes admiration of architectural beauty,” said architect Pirast Pacharaswate.

This modern home under the gable roof evokes admiration through design and the power of storytelling about the architectural design concept that integrates traditional values, longing for nature, and great aesthetic pleasure to form a coherent whole. 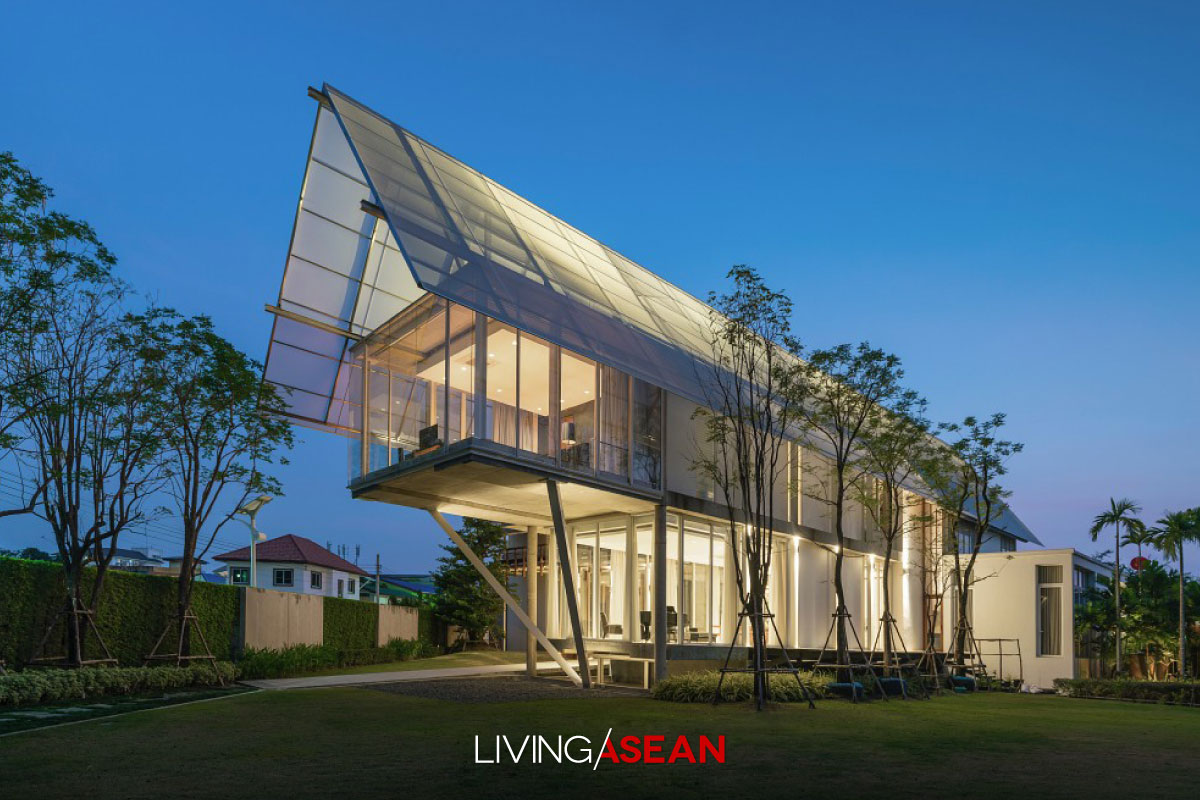