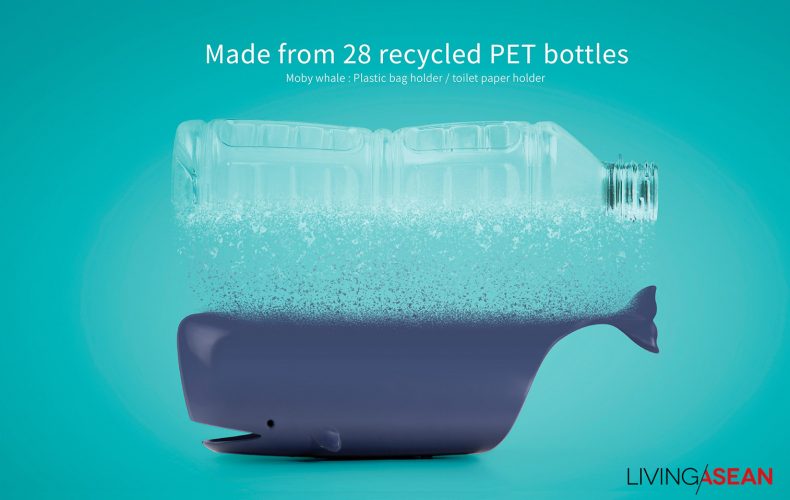 Who would have thought it! Discarded plastic bottles and jars could transform into cute whale-shaped napkin box covers. Not to mention water-saving glass drying trays for the kitchen. Plenty of fantastic ideas for modern home décor and accessories to make sure everything is organized and in place! 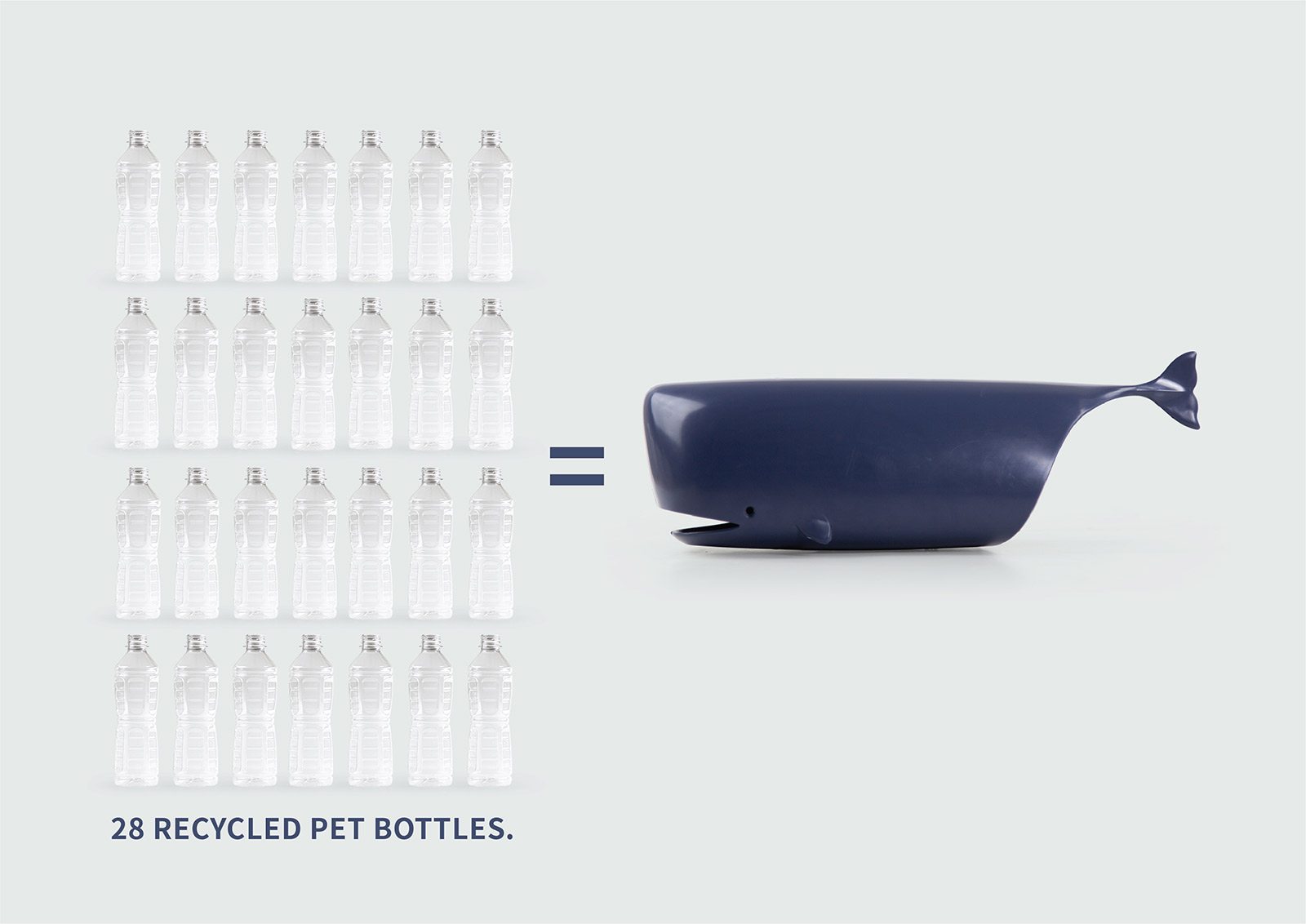 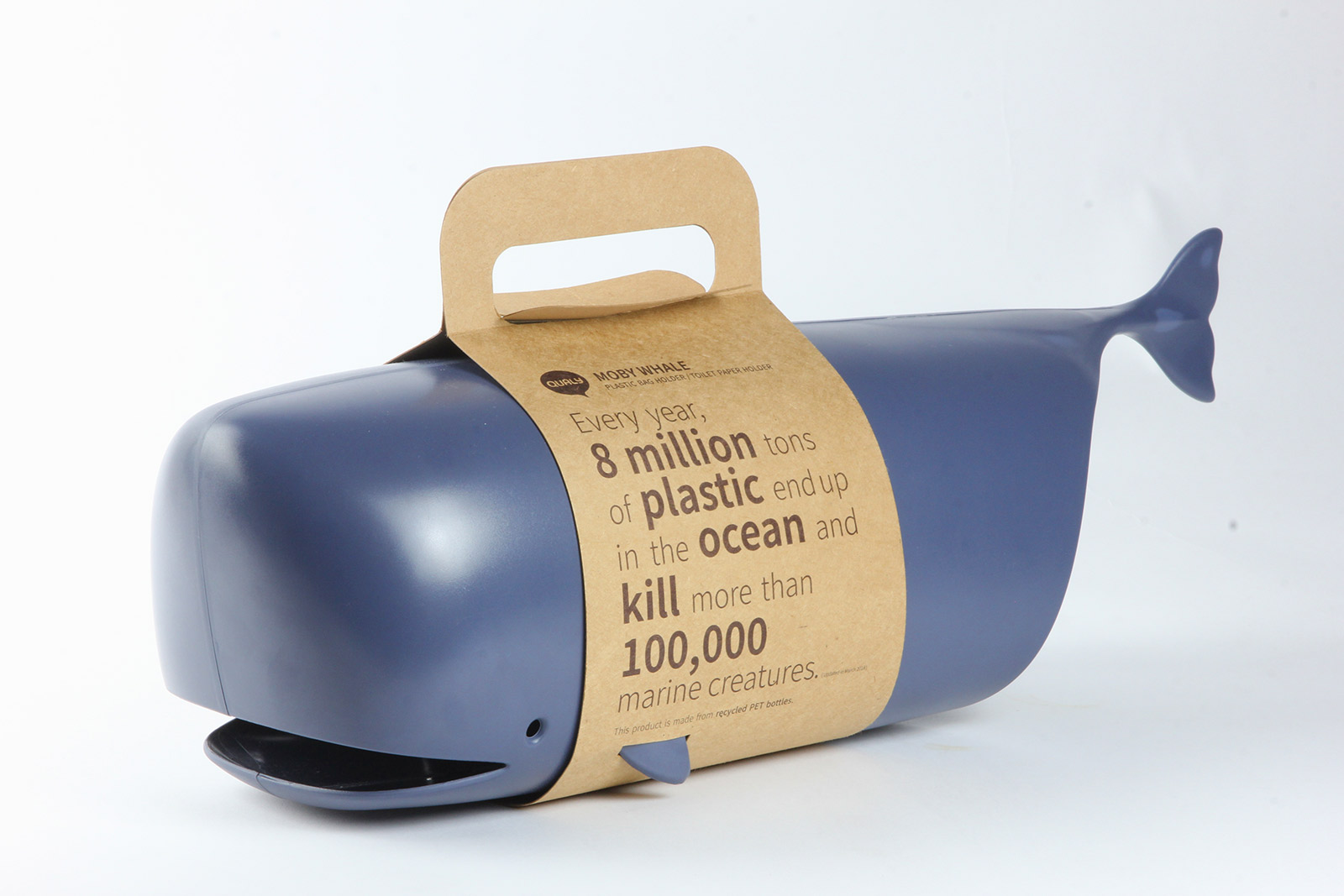 Disposable plastic bottles become trash after a single use. In the manufacturing process, some of them are discarded without seeing the light of day. The good news.  Designers have come up with ingenious ideas to turn waste into products of better quality and higher value than the original.  And the sky’s the limit.

Many transparent plastic bottles are made from a type of plastic called polyethylene terephthalate, or PET. What we don’t see is the plastic packaging that doesn’t make it to the shelf. In the manufacturing process, bottle samples are taken out and evaluated. By law, the plastic packaging that fails quality control testing cannot be recycled into bottles and jars again. So they become raw materials to make different types of goods instead.

The Qualy manufacturer brand, in collaboration with the beverage company Ichitan, is able to breathe new life into unusable industrial waste, turning it into reusable raw materials. Its main forte lies in design capabilities that turn unwanted materials into upcycled products that meet the higher expectations of modern customers.

Its expert skill in recycling earns it a reputation for creative new products for a chic home update. One of them is the cute whale-shaped napkin box cover called “Moby” that takes 28 recycled plastic bottles to make. It takes pride of place in the bathroom, or serves as a reusable plastic bag holder for the kitchen. Anyway only biodegradable plastic bags are recommended. The design is stimulated by whales that have died from plastic waste in their stomach. It’s the tip of the iceberg that reminds us all to use less plastic to protect the environment. 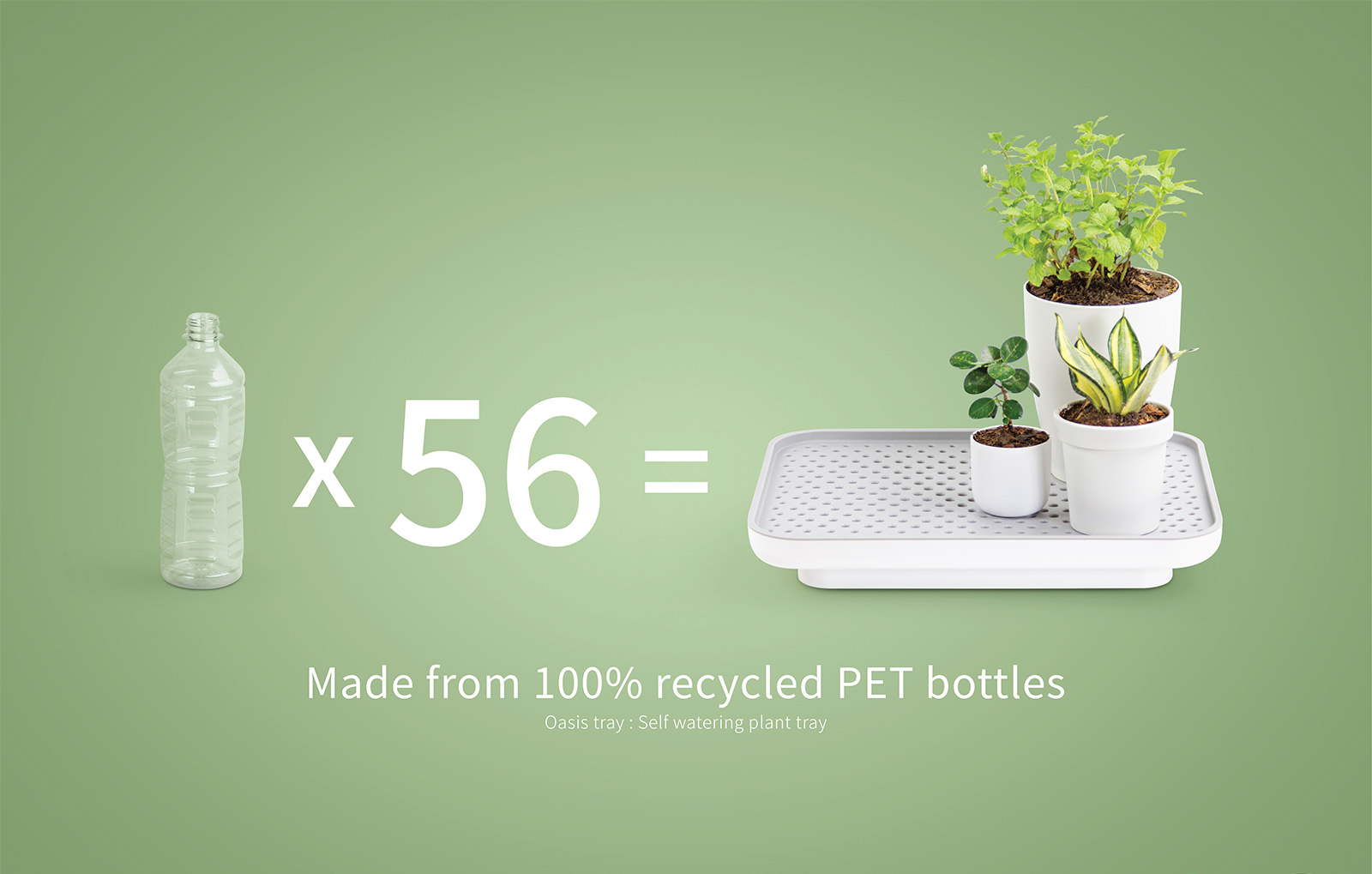 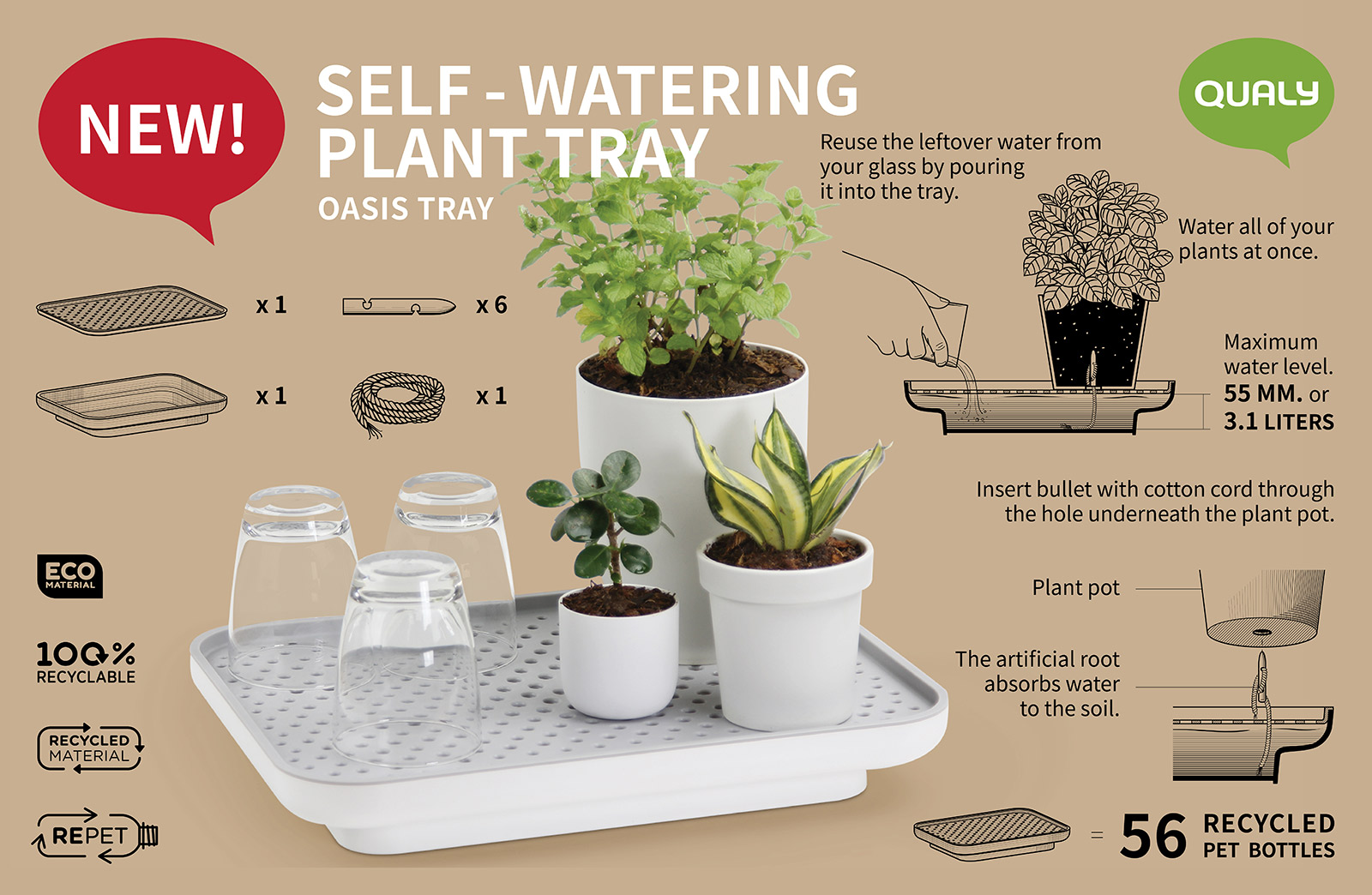 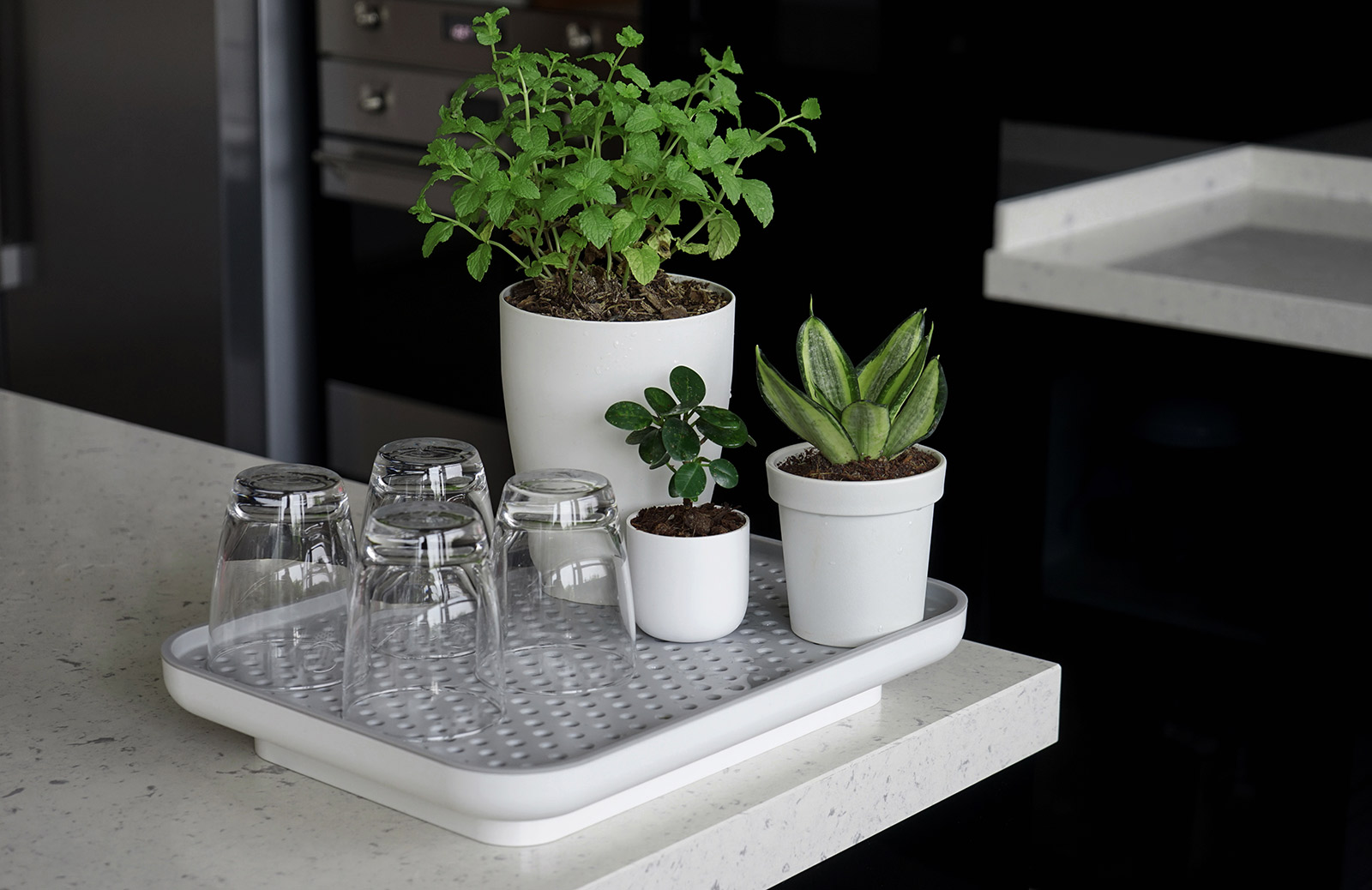 Also worthy of attention is the aptly named “Oasis Tray”, a drinking glass drying rack made from 56 recycled plastic bottles. It doubles as an irrigation system that supplies small amounts of water to houseplants.

Other interesting products include a beautiful array of indoor planters, each made from about 8 to 10 recycled PET bottles. Not to mention greenhouse supplies and cute containers designed to encourage people to start growing for a better, healthier home environment. 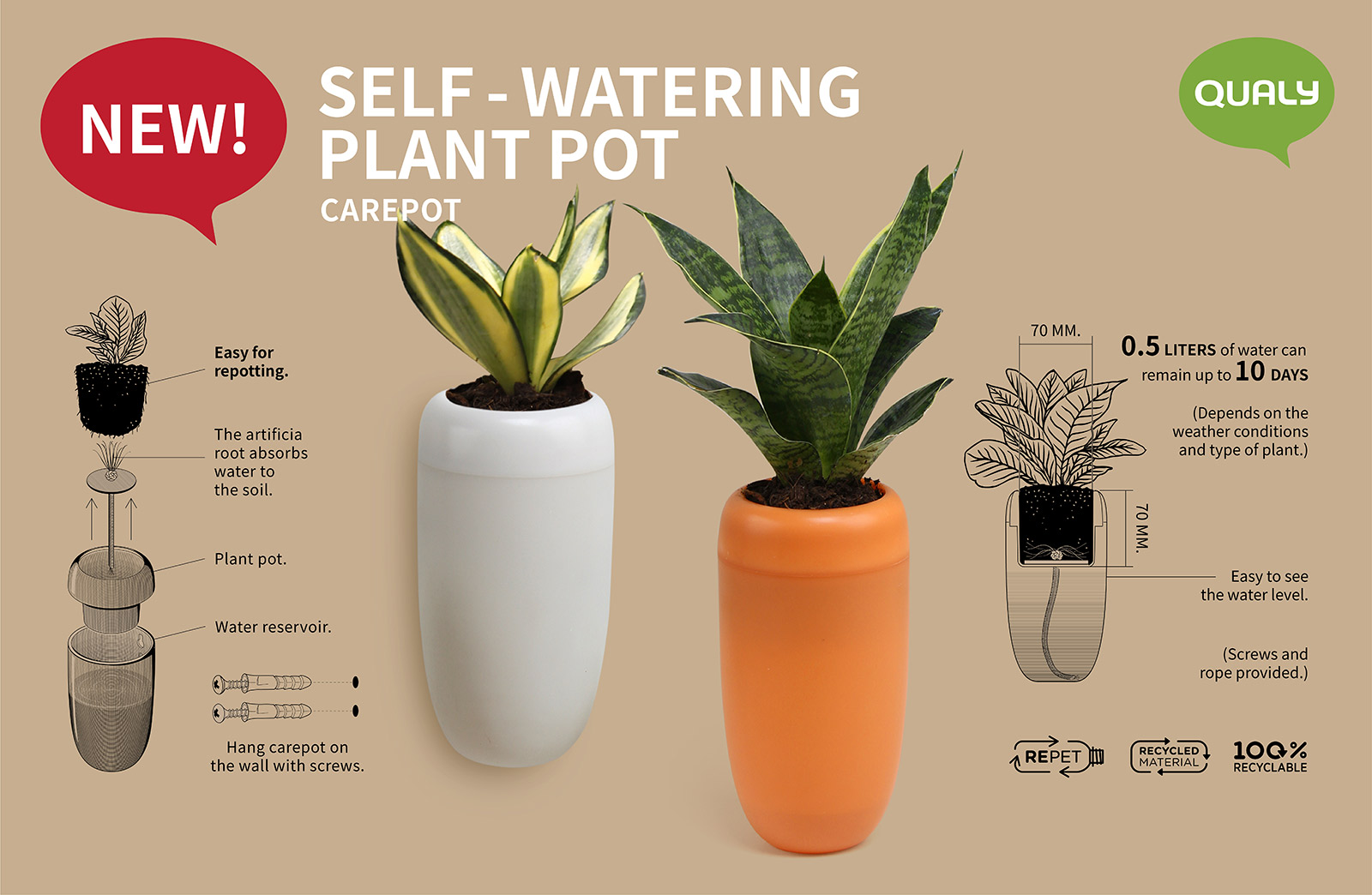 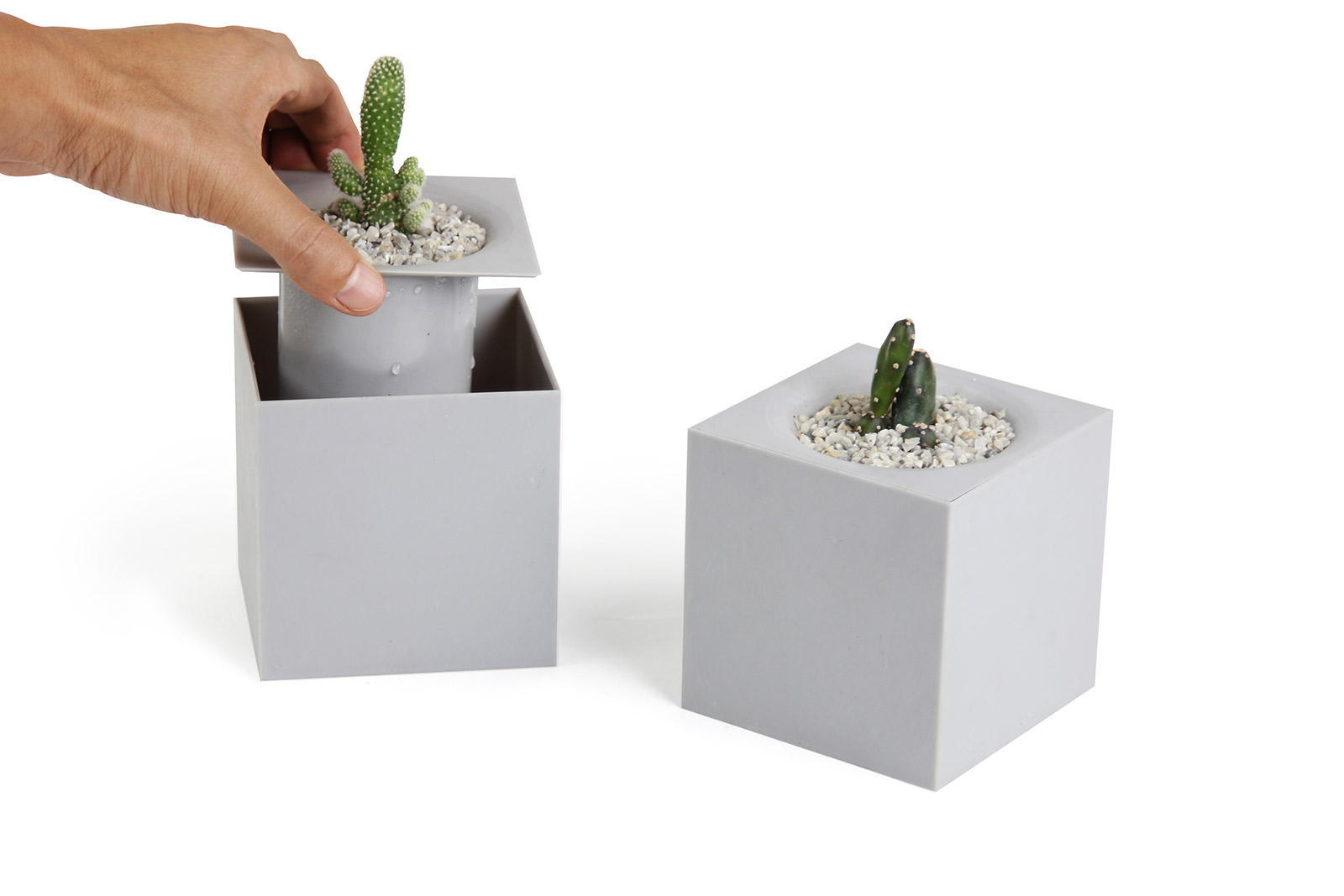 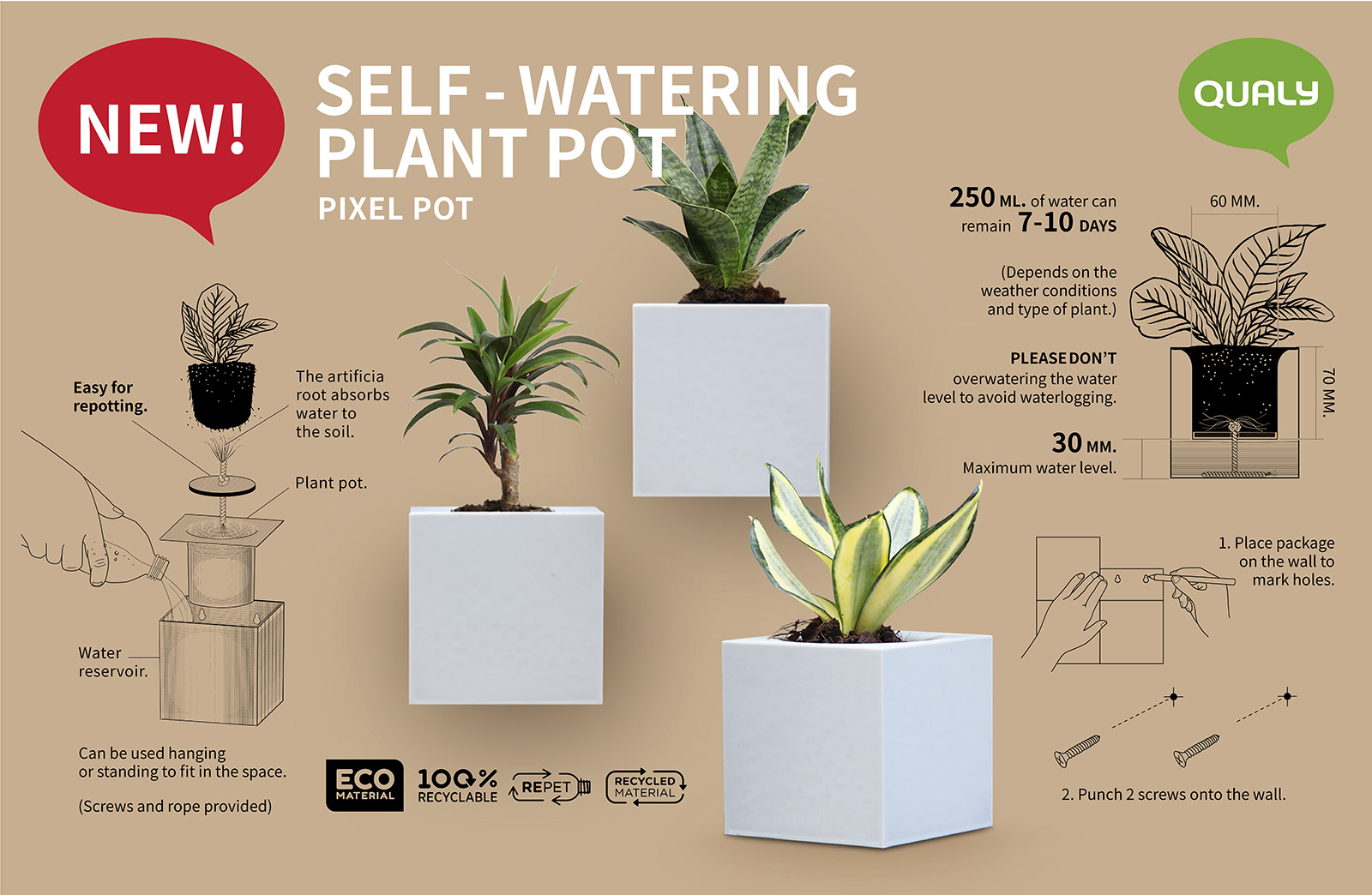 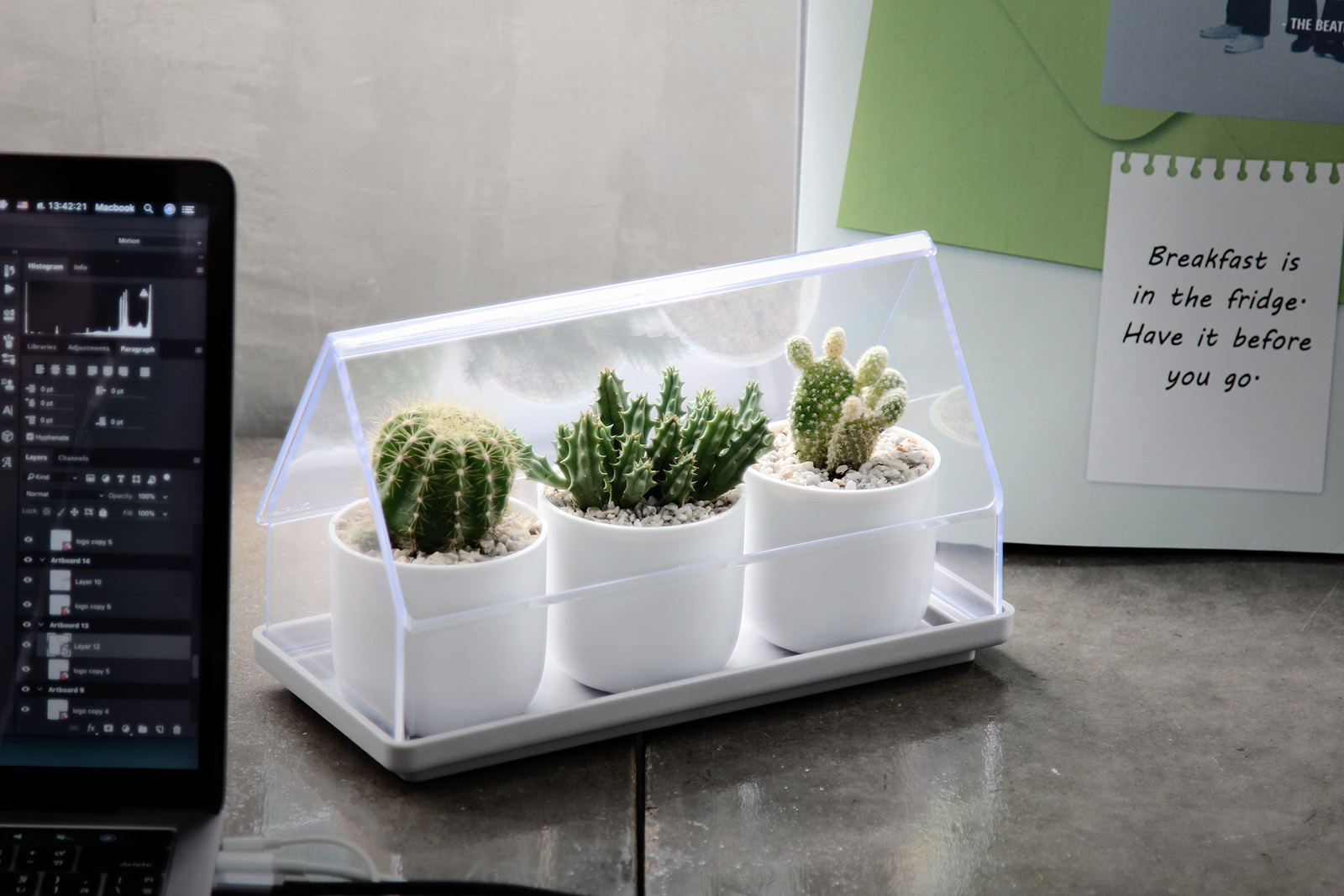 Together, they convey a rich and subtle message. Reduce plastic waste now, or turn it into new materials for creative reuse. After all, we still have plenty of discarded PET plastic packaging to deal with. 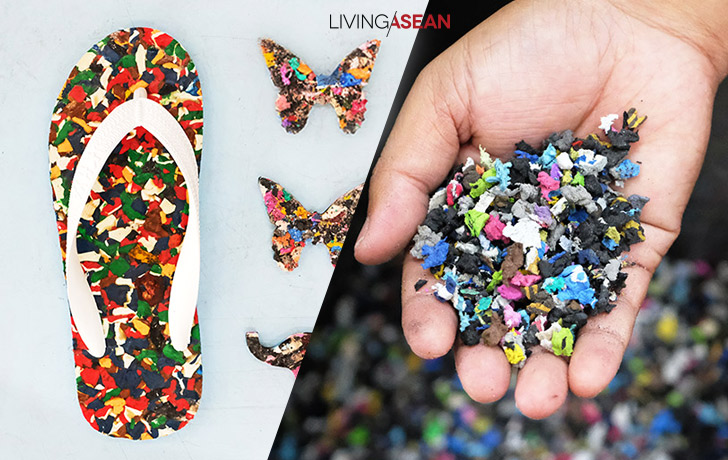 After the research, Deesawat used many kinds of waste materials to combine and create building materials as the new way. For the eco flooring, basic materials will be cut in various timber species such as teak, white oak, rosewood, and walnut. Deesawat also add up eco board which is recycle material from the trash(aluminum and PE) from UHT milk pack, press into board and profile into another material. With this combination, the product is presented as an interesting combination of materials that can create a good reusable design for project requirement. Eco Flooring by Deesawat received the DEmark Award in the industrial category from Thailand and also received the Good Design Award from Japan which guarantees the quality of the produce. 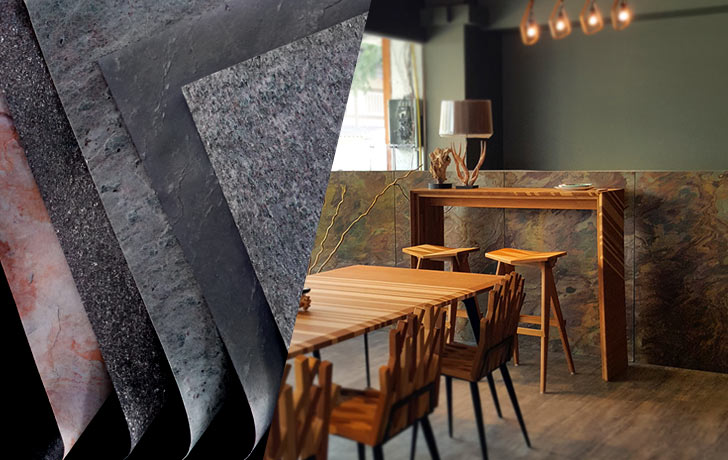 Flexx stone is a veneer with layers of natural stone and polymer composite. This innovation makes it thin, light and yet strong. It is used for both interior and exterior and especially where bending to a curved surface is required. Flexx Stone can be applied on any surface: concrete, masonry, wallboard, metal, plywood and drywall. It can be glued by PU adhesive, silicone and epoxy. Its surface can be treated like natural stone, glossy or matt.

Easy to cut and work with

Every stale is unique Nowadays, Flexible stone veneer was installed in many countries in Europe, America and Asia. Flexx Stone in Thailand was distributed by Plan X Co.,Ltd. From Rice Husk to Bio-composite Tile and Solid Surface Husk Collection was created from discarded outer shells of rice during milling process. Sonite’s new Husk mosaics and solid surface incorporate significant quantities of agricultural waste. The collection’s advanced bio-composite design yields coverings not only beautiful but also ecologically friendly. Husk is available in four organic tones, balance between natural warmth and contemporary chic. Eco-Friendliness: Despite being polymer-based, the materials are exceptionally eco-friendly. Tests have proved a carbon footprint equal to or less than the lowest among mosaic tile manufacturers. In Europe, Husk furthermore has received a highest attainable A+ score in tests for VOC emissions. * In Vietnam, rice husk has been dumped in local rivers, causing a big problem. (http://irri.org/rice-today/a-second-life-for-rice-husk)

* Rice husks are composed mainly of cellulose, silica + lignin and are a ‘Class A’ thermal insulation material. Husks are difficult to burn and are unlikely to propagate mold. (http://esrla.com/pdf/ricehullhouse.pdf)