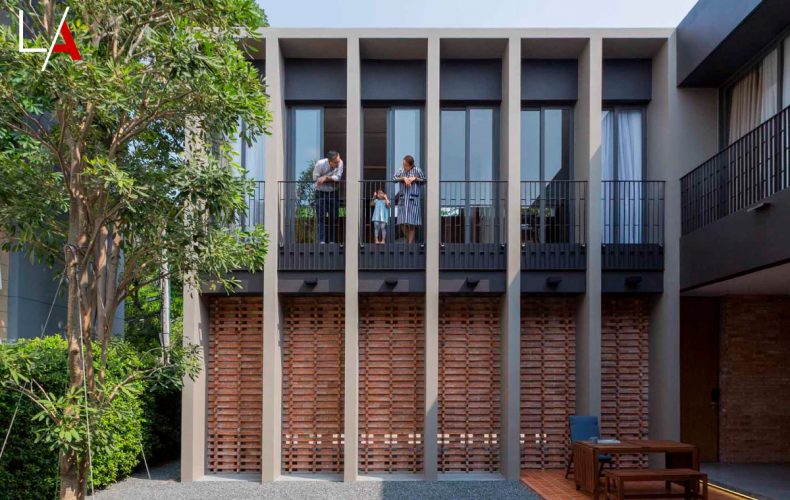 Let’s say you’re looking for a modern courtyard house plan to get inspired. Here’s one nestled in the heart of Bangkok’s downtown that’s built to accommodate three generations living in one household. Nice work, it’s capable of answering the family’s lifestyle needs, plus it’s easy to maintain thanks to uncomplicated design. What looks opague from the outside is compensated by a center courtyard that’s light and airy. Its story is inscribed as part of the building’s decorative features. 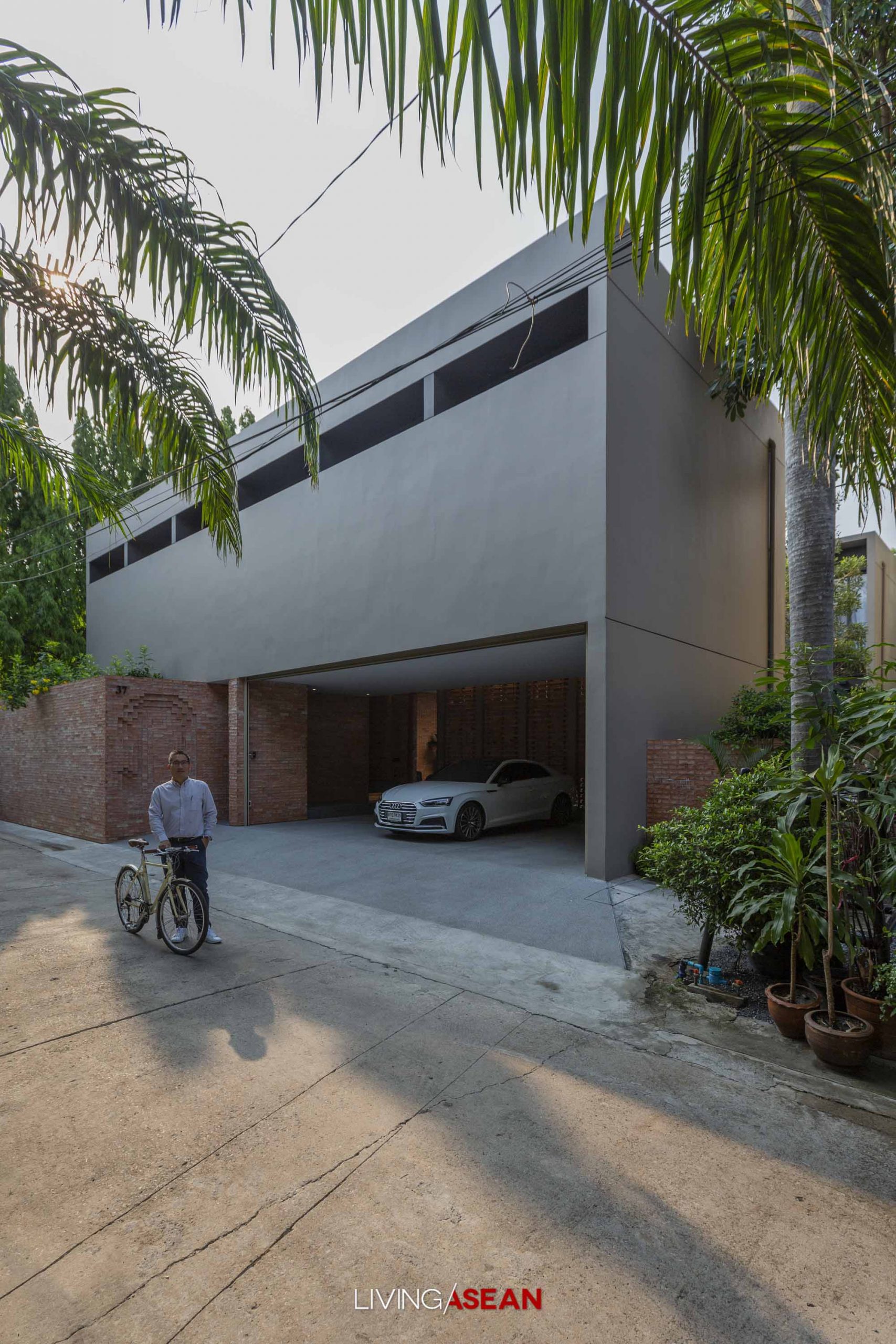 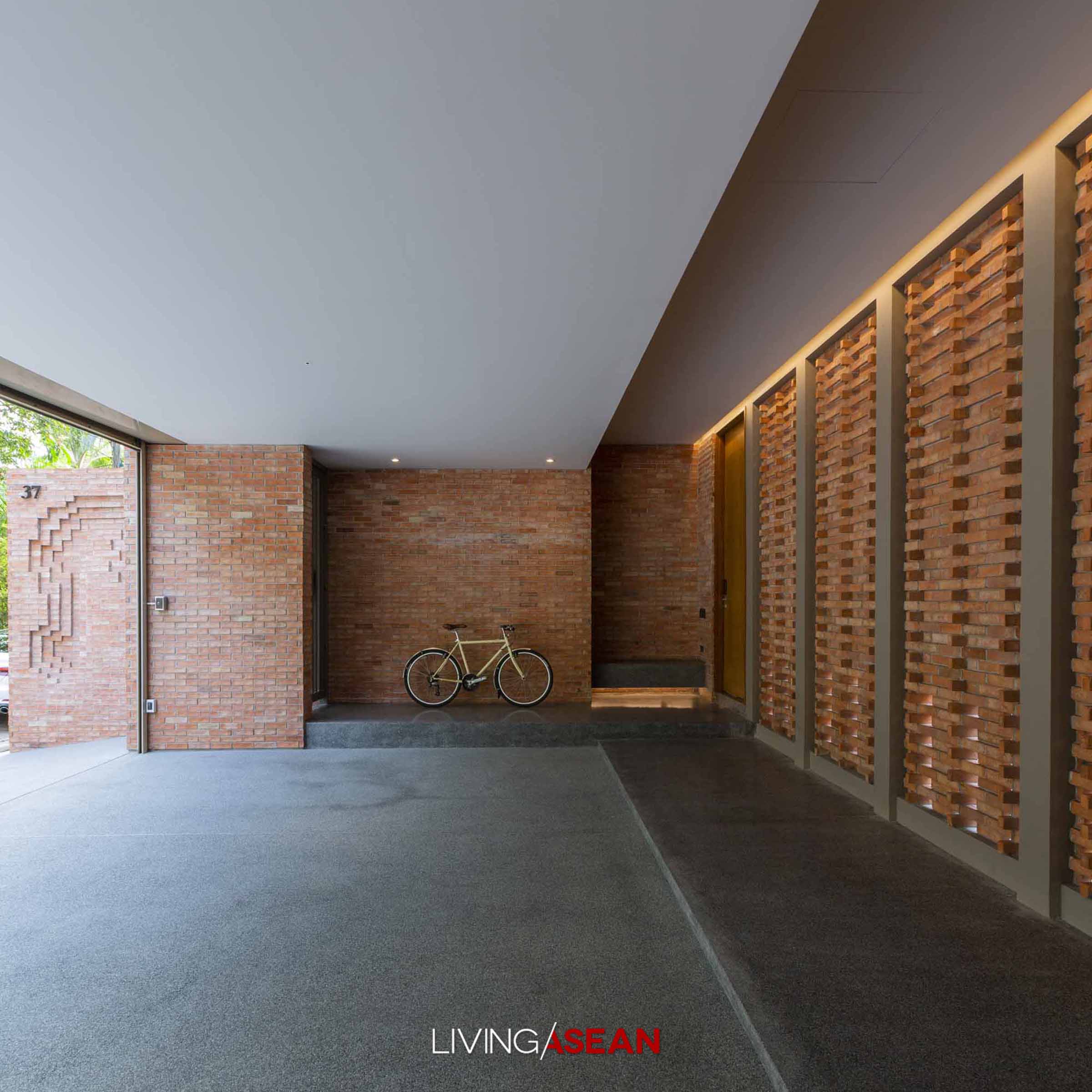 When a design team from the Atelier of Architects Co, Ltd was tasked with creating a new home for eight people including not just parents and their children, but also grandparents, the first things they thought of were safety features, comfortable living conditions, privacy protection, and a peaceful environment for all family members. Yes. That’s exactly what they had in mind. 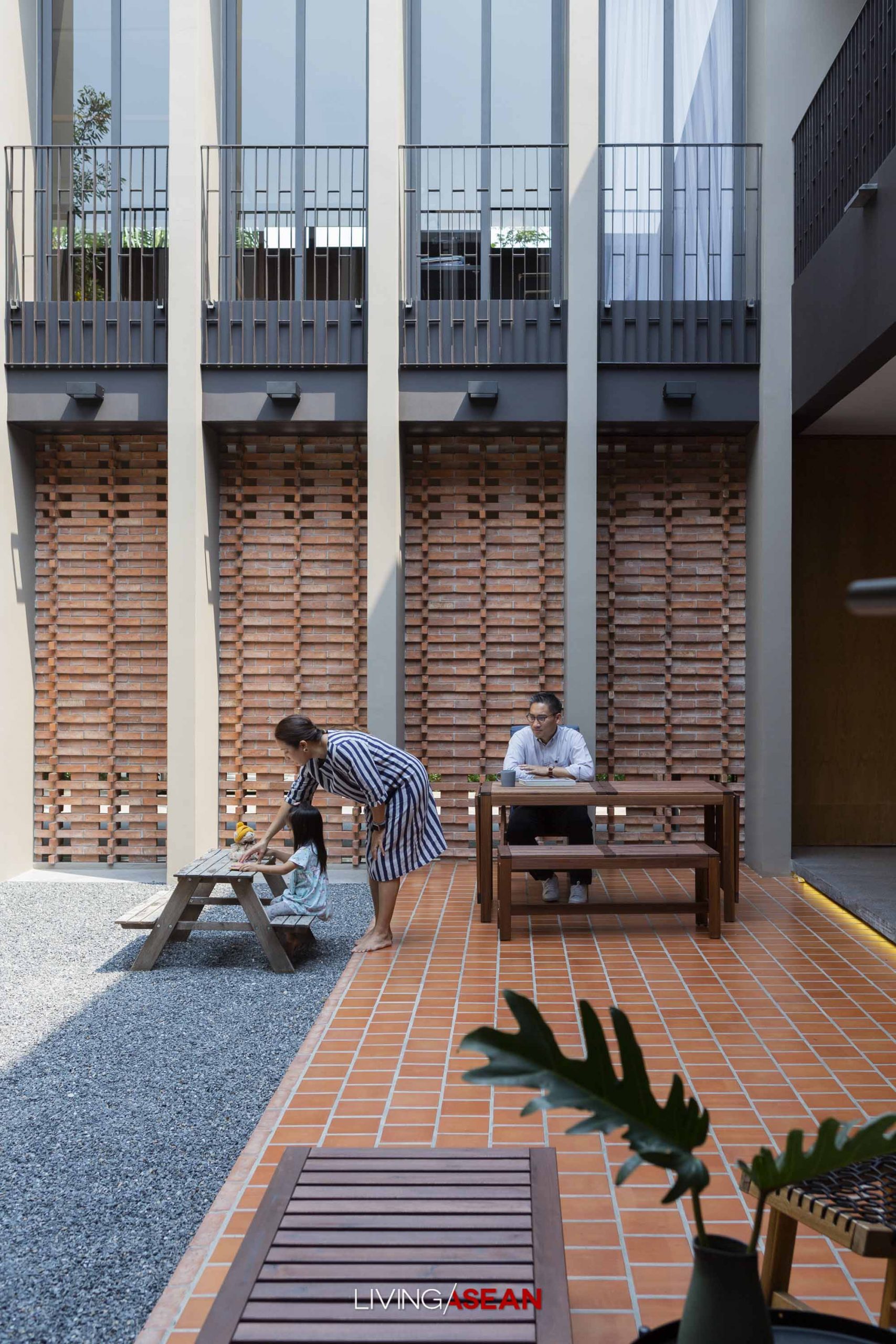 The two-level, six-bedroom house plan may seem a bit crowded for a 130-sq-wah plot of land, but the overall layout is impressive. It’s neatly planned to ensure the proper space utilization. In so doing, every available space is used in an effective way. Homeowner Salyawate Prasertwitayakarn, himself an architect, put it this way:

“If the house is built in the middle as is usually the case, there won’t be enough room for a yard, let alone a small piece of ground for trees. The land is environed by vacant lots that will see large property developments taking place in future. So the only way forward is to build a U-shaped home with solid walls along the outside of the house and a center courtyard facing an apartment building that’s the family’s business. Although the courtyard lies facing west, it’s protected from the sun and heat by the adjacent five-story apartment building. The result is a cool small outdoor area for little children to run and play. To protect family privacy, vertical concrete fins and a full array of plantation blinds are installed along the building façade facing the apartment building.” 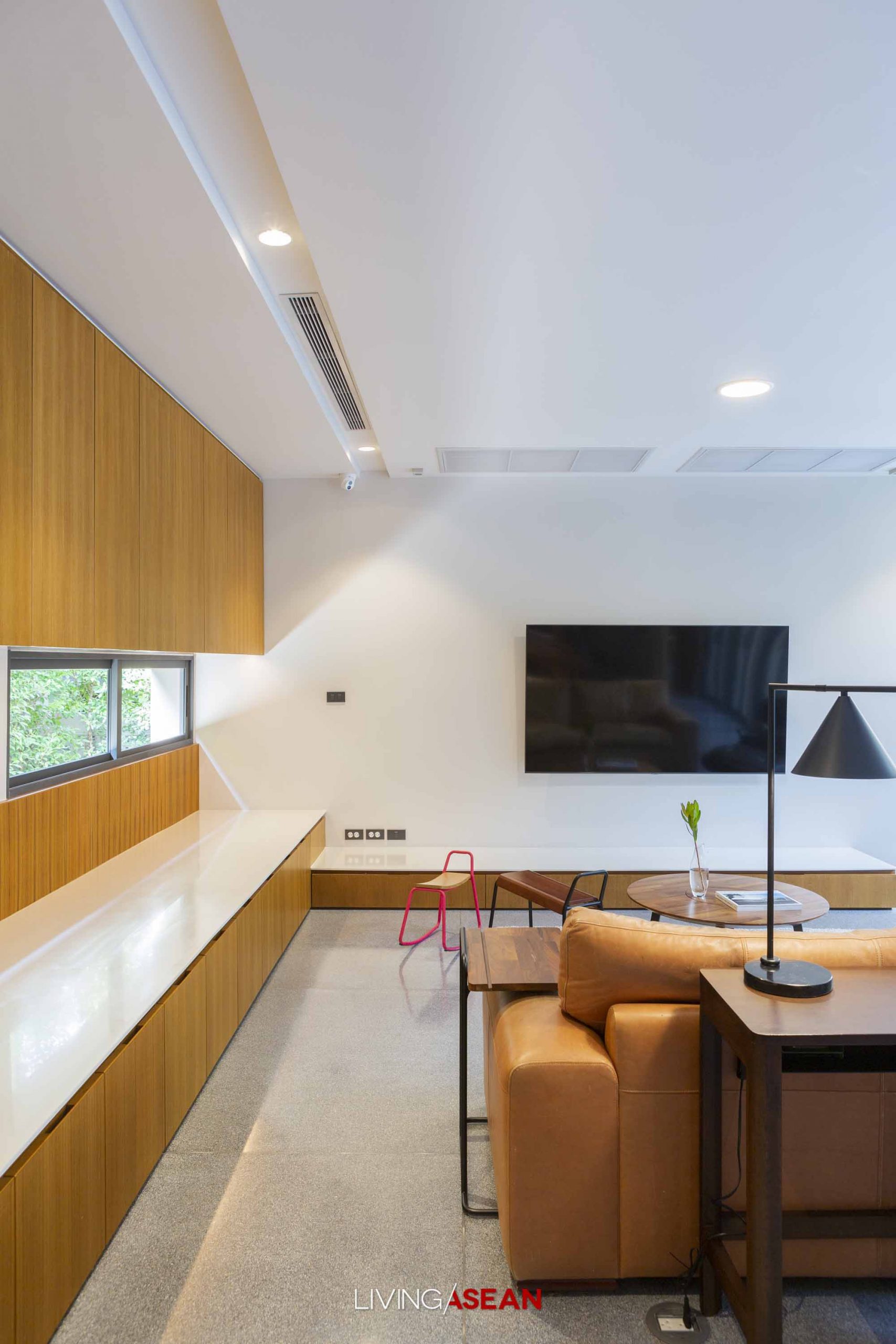 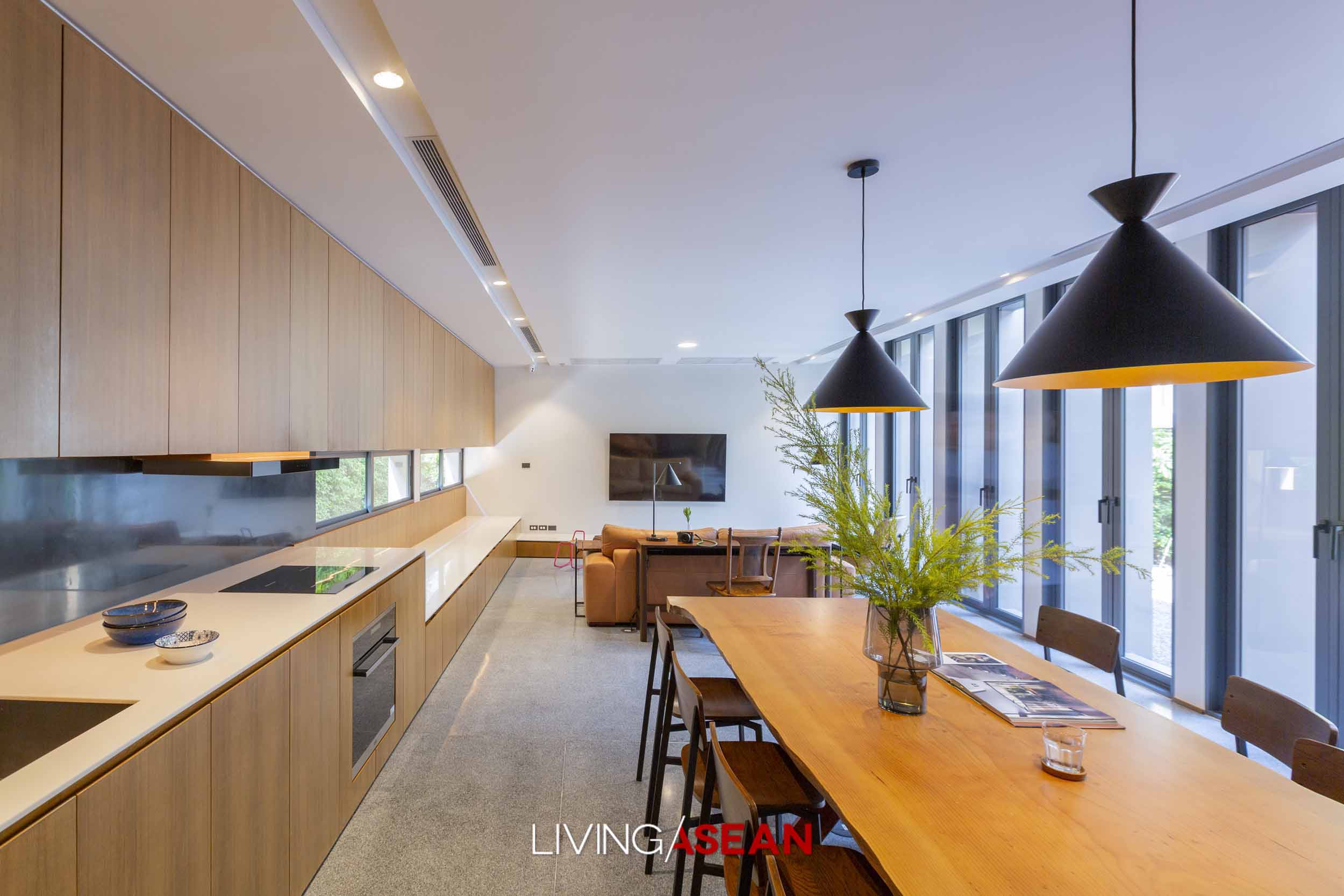 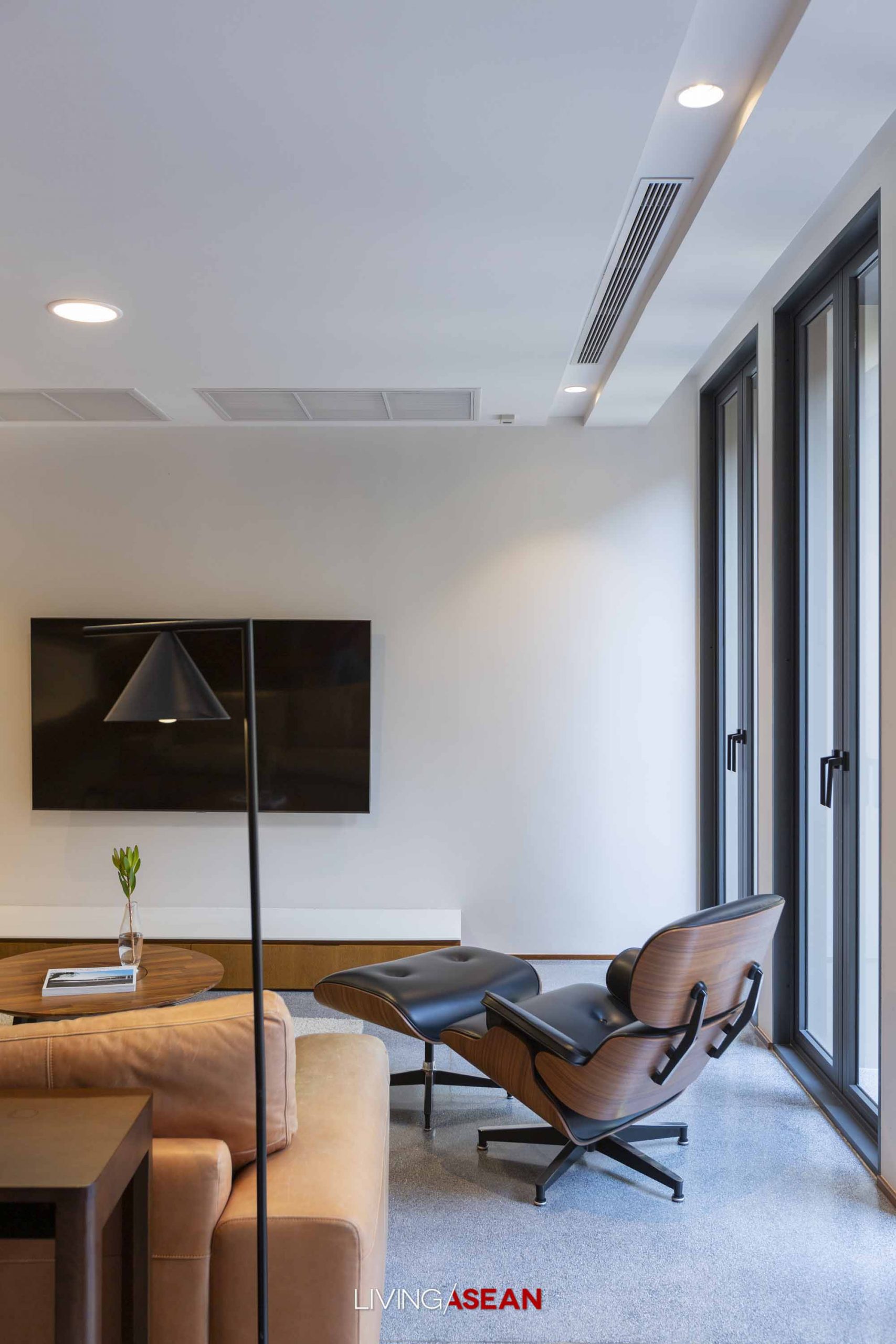 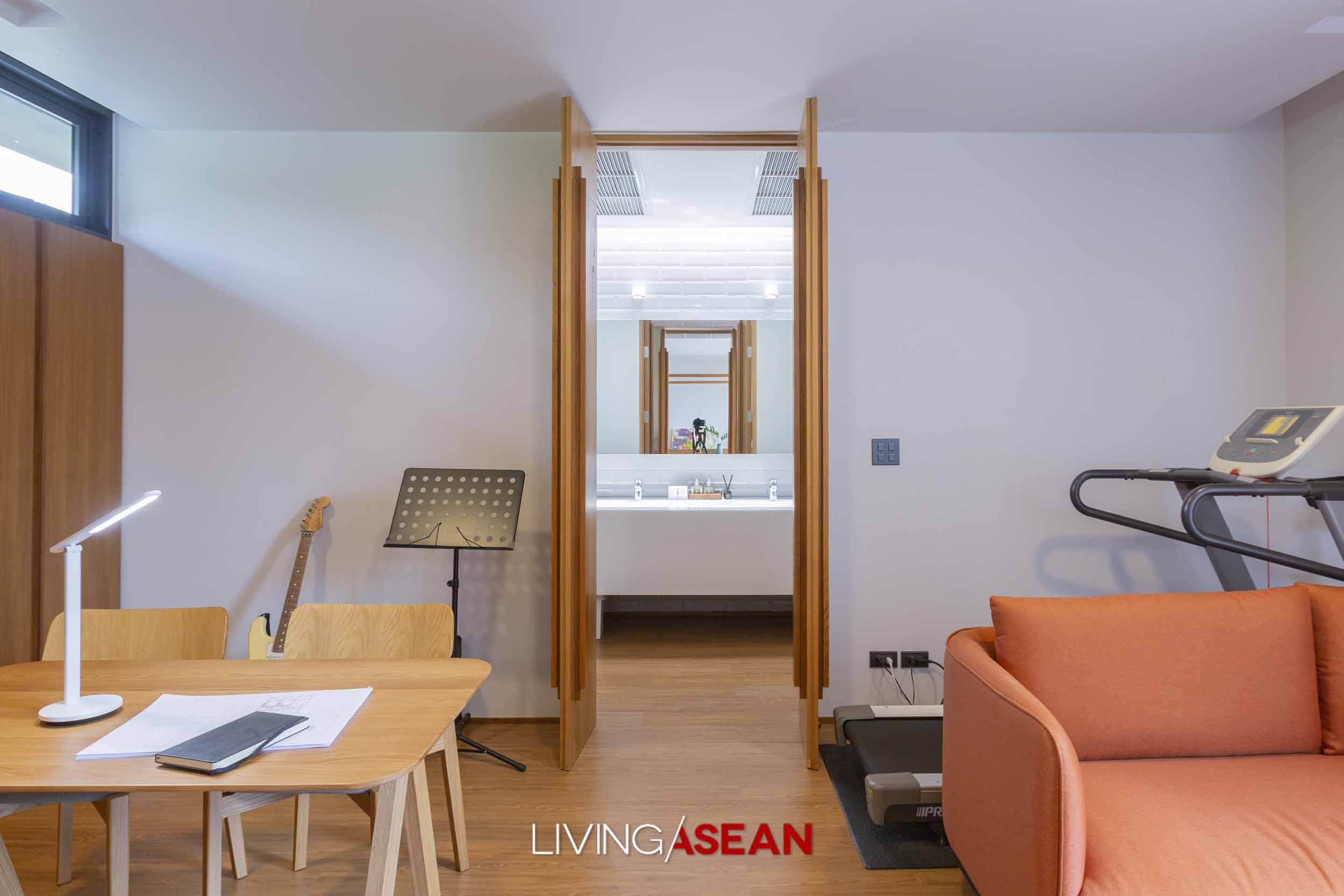 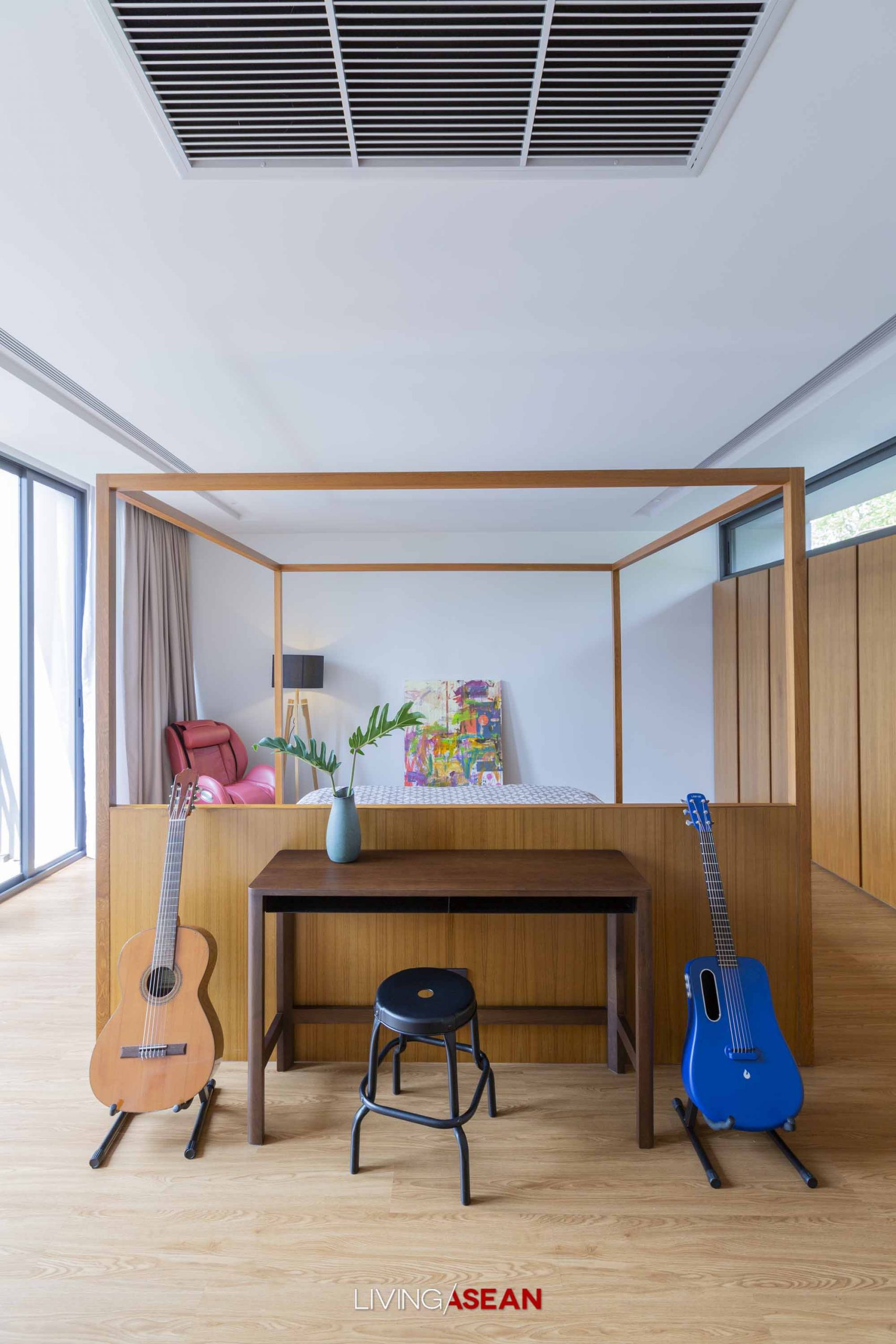 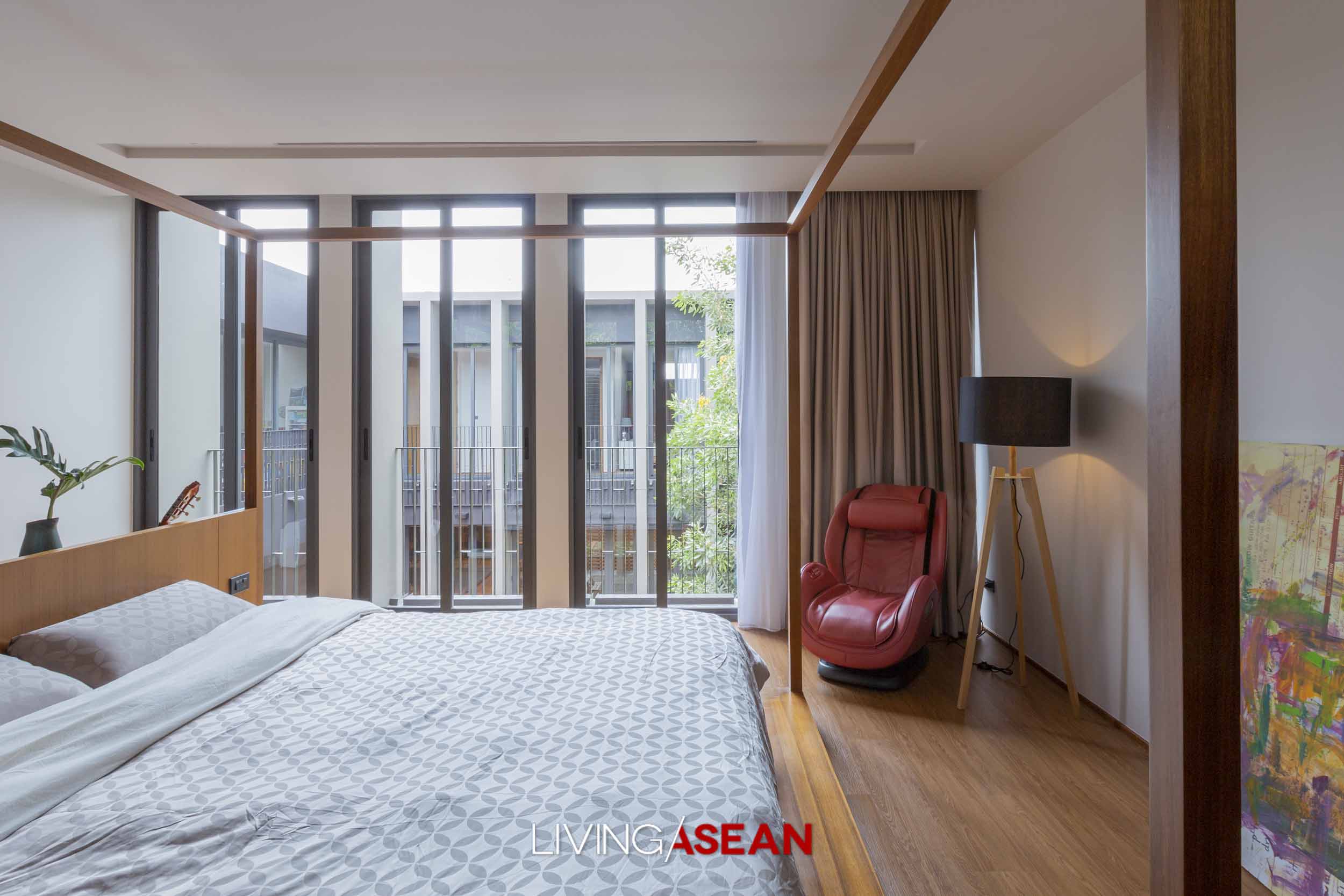 Taken as a whole, it’s uncomplicated design that gives this new house its character. Its outstanding features include an array of transom windows that bring more natural light into the home. Its modern and fresh interior with shades of gray bespeaks a clean, clear and uncluttered layout, while exposed brick walls add timeless elegance to the peaceful ambience. The courtyard patio is covered in gray pea sized gravel that’s easy to maintain. It’s a simple yet attractive design that expresses rich and subtle meanings. On this matter, Salyawate explained:

“I want to get the message across, something that internalizes values and what’s important in life for everyone in the family. This is evident in the work of art executed directly on the brick wall by the entryway. It takes the form of the Thai letter “p” that’s the initial of the family’s three sons — Pahda, Pheem, and Pinyada. Precisely, it’s a reminder that this place is made for them.” 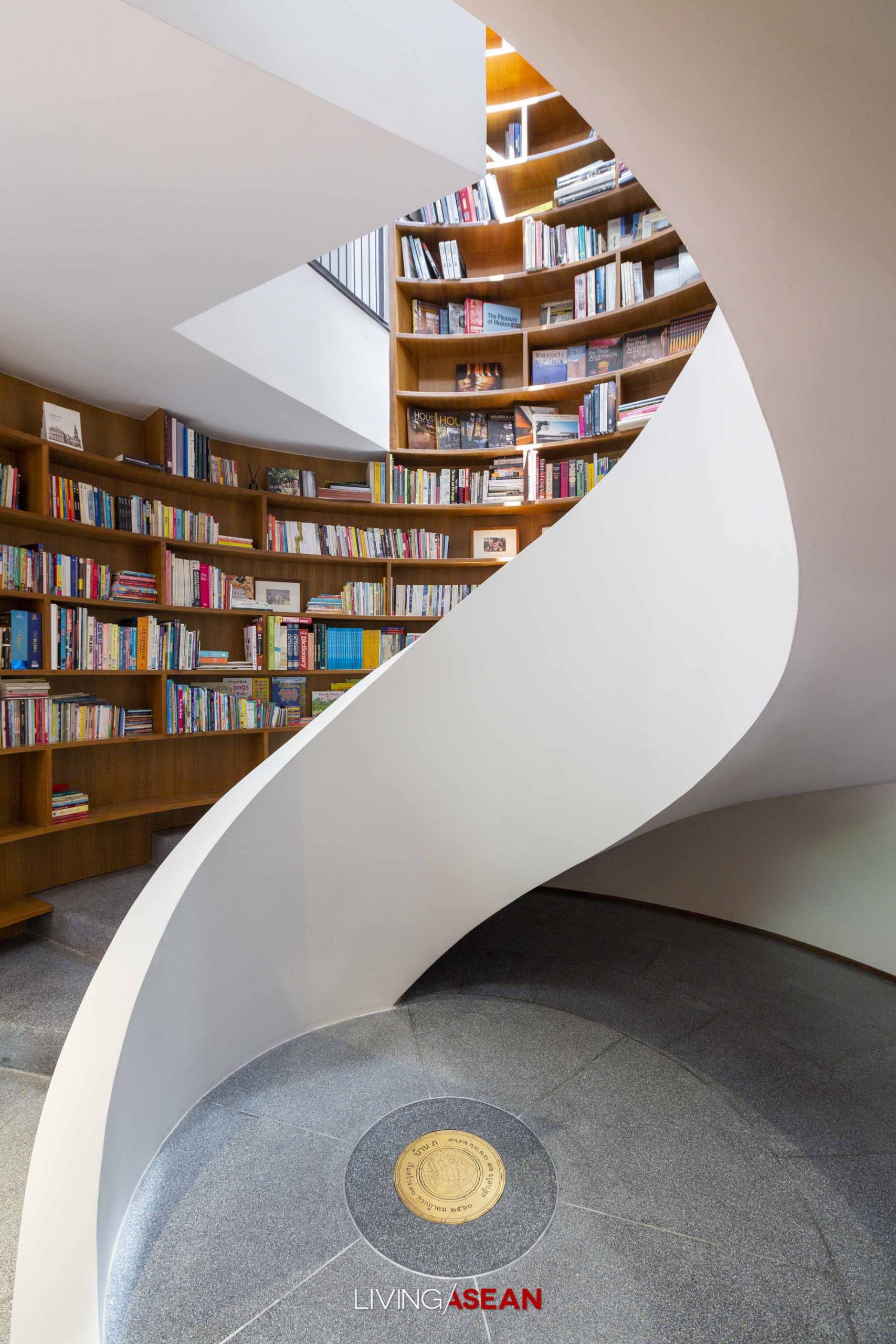 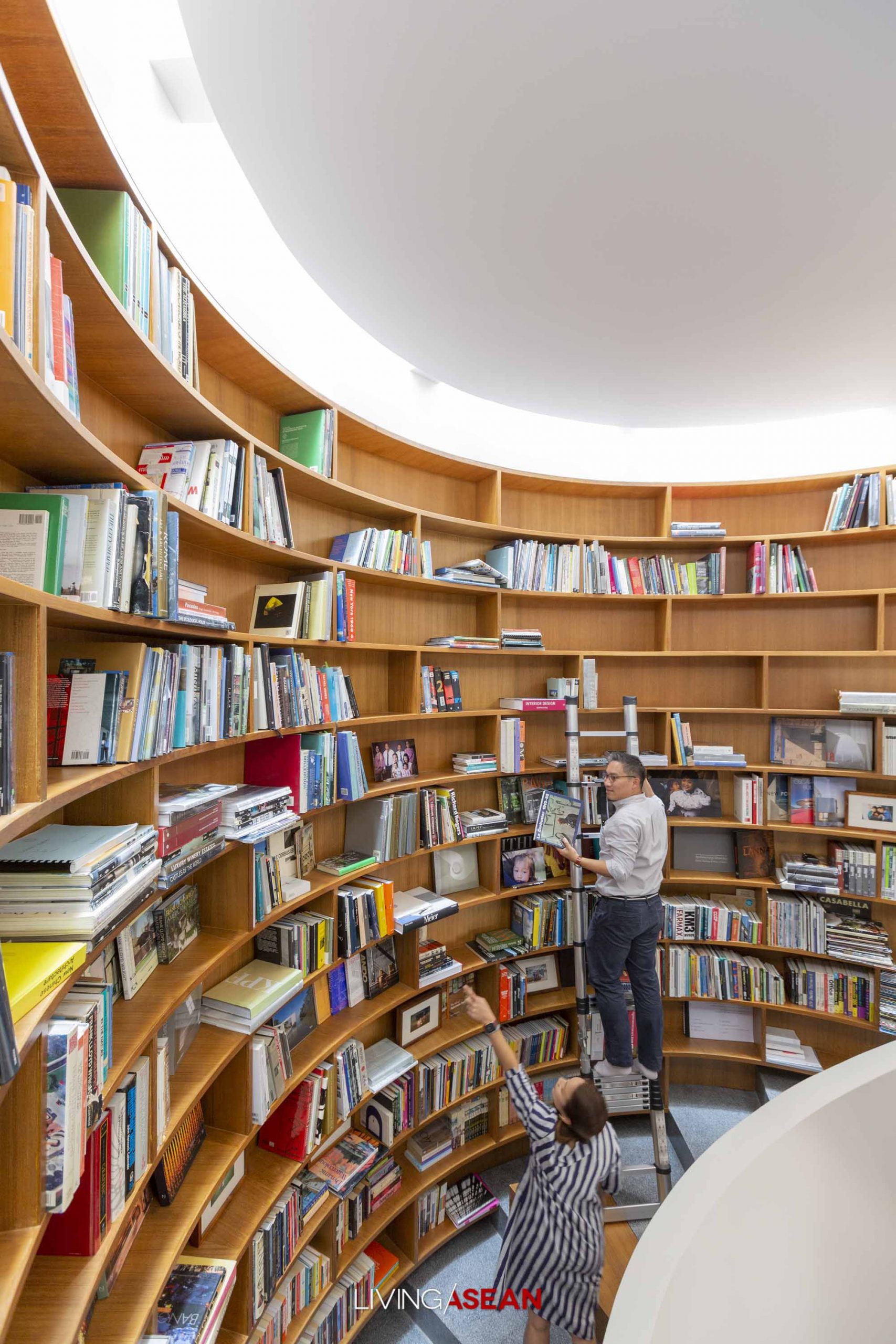 To get people from one floor to the next, a spiral staircase stands surrounded by bookshelves. It’s the most frequented area of the house where a blonze plaque is installed as a reminder of when the house was built and completed. The outlines of the couple’s hands and those of their children are inscribed on it. Small hand images indicate the family moved in when the kids were little. 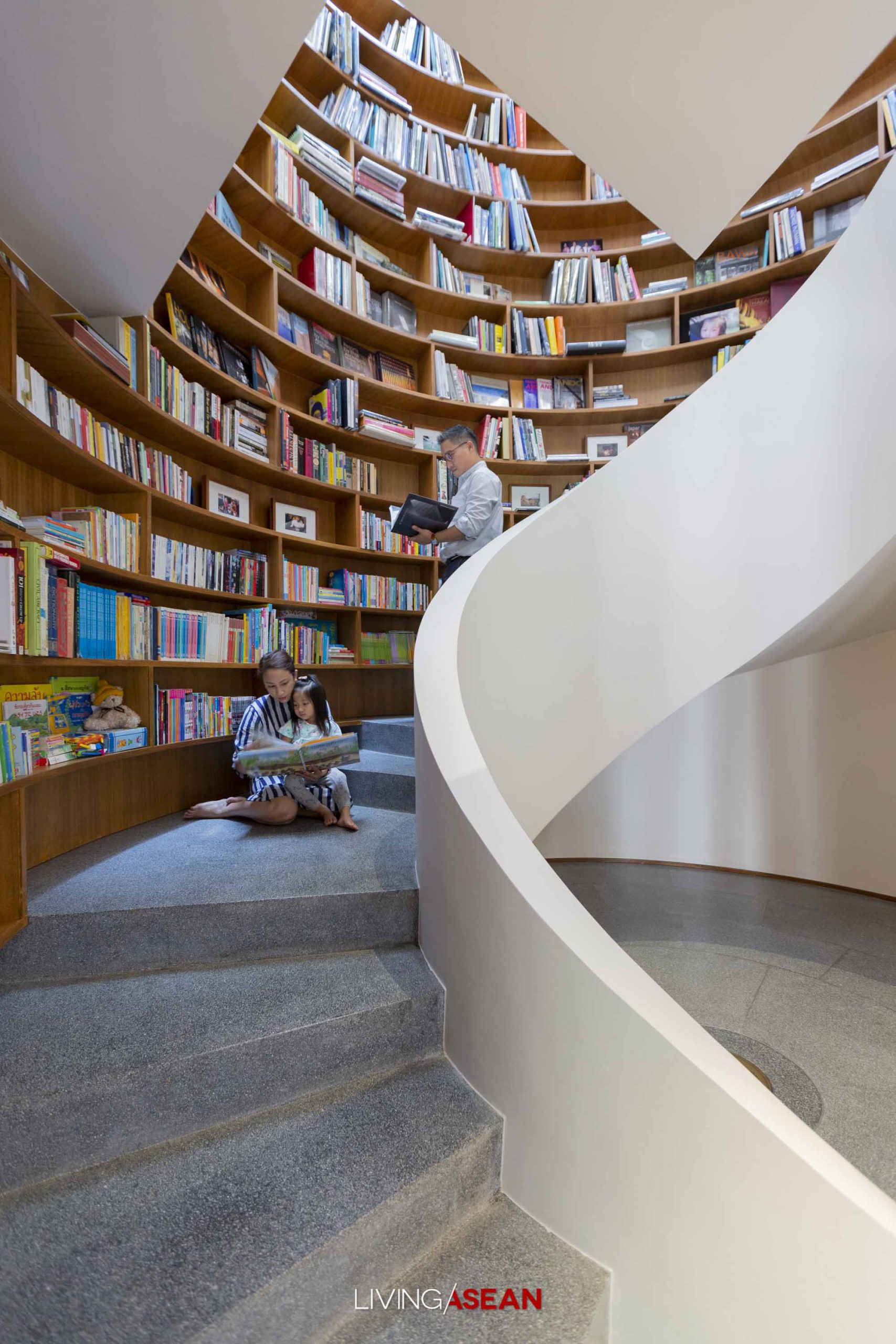 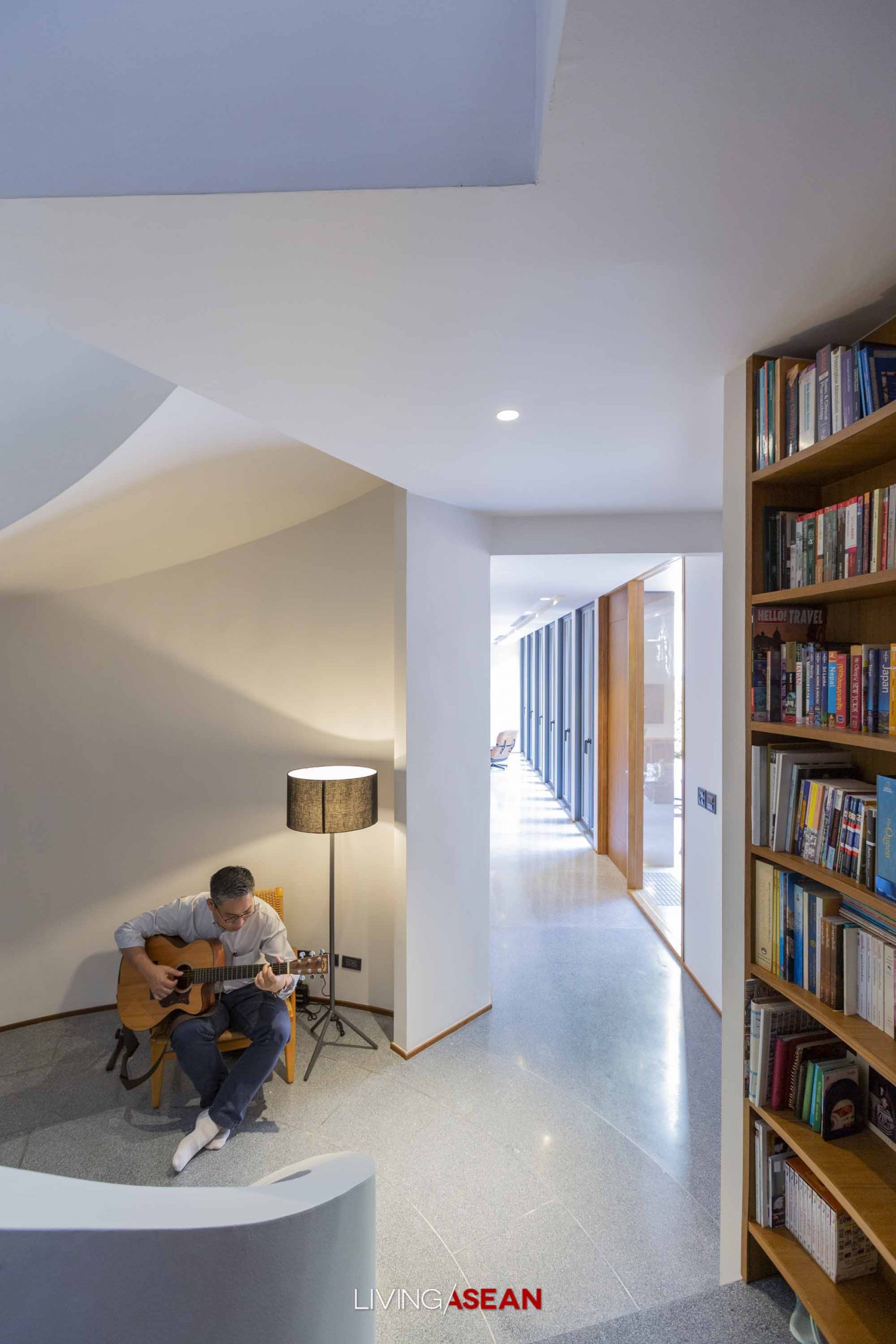 Visiting house guests can tell right away the home is perfectly cozy without elaborate décor. But for the eight people who live here, it’s a special place made for living a simple life, one full of rest and room to pursue their dreams. 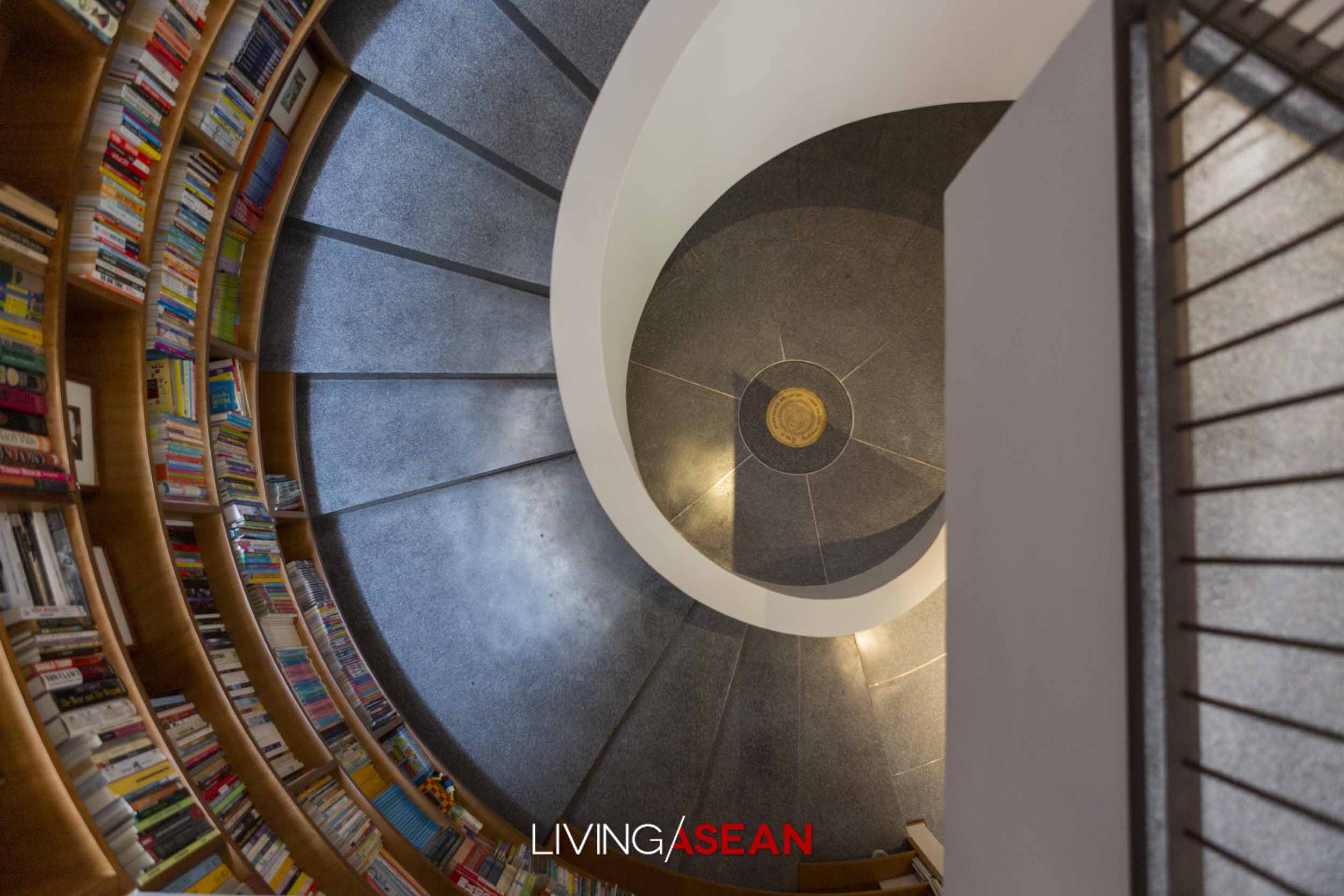