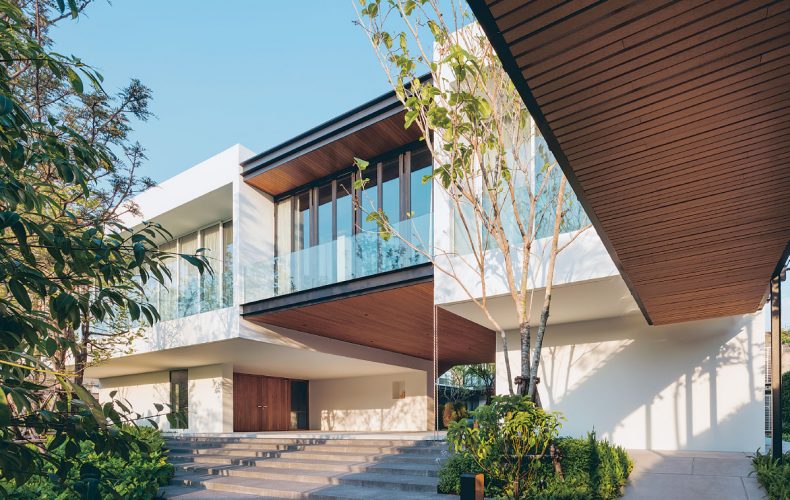 “The ground floor exists in open view, so everybody can  participate in the activity.  It consists of an ancestral hall,  living room, and dining space with large opening glass walls.    It offers the view of a central courtyard that’s made for family gatherings. There is visual continuity that allows   everybody to be in the sight of everybody else.”

It’s next to impossible to find peace and privacy in the midst of movement and activity of Bangkok’s busy Sathu Pradit neighborhood. But this house is one that defies the odds. The freedom of being observed or disturbed by other people is accomplished in ways that most would deem impossible. The difficult situation is solved, thanks to clever design and interior decoration by Integrated Field Co., Ltd. in collaboration with Na Laan Studio Co., Ltd. the landscape designer.

The homeowners wanted a place in which to spend their post retirement years. That was the homework assigned to the capable team of designers at Integrated Field. They were looking at creating a home that would be the heart and soul of the family. That was the main idea that went into building this house on an area just shy of 2 Rai (roughly three quarters of an acre). There was a problem.

The land was in a densely populated area surrounded by high-rise buildings, especially in the north and west directions. The architects dealt with the difficult situation by creating a home plan that wrapped around a lush central courtyard designed for the benefit of family togetherness. The house is now complete.

The ground floor exists in open view, so everybody can participate in the activity. It consists of an ancestral hall, living room, and dining space with large opening glass walls. It offers the view of a central courtyard that’s made for family gatherings. There is visual continuity that allows everybody to be in the sight of everybody else. Only the service areas, such as the kitchen, bathrooms, and living quarters for housekeepers are separated from main hall design by a nontransparent wall.

A Buddha room sits in the common area near a run of stairs leading to the upper floor that contains bedrooms for all family members. For the utmost convenience in modern living, each bedroom comes complete with a workstation, living area, a bathroom en suite. Apart from capacity for the interconnection among household members, the house’s most outstanding feature is contact with the natural environment that’s apparent in a lush inner courtyard.

The building is oriented to have the front façade stand facing south, a direction that isn’t likely to be observed or disturbed by other people. It stands to reap the full health benefits from southerly winds that keep the house cool naturally all day. In so doing, an array of bi-fold doors is installed, while transom windows are fitted with nets for ventilation. Meantime, a skylight that illuminates the interior also doubles as engine that drives natural air circulation.

On the side that’s exposed to intense sunlight, double concrete walls are installed, while the windows are fitted with insulated glass. Outside, the walls are canopied by overhanging trees that have become the house’s first layer of protection from the elements. What’s obvious here is that design isn’t about bricks and mortar alone. Rather, it has a lot to do with promoting the comforts and quality of life for people living in it.

As this house has shown, it pays to have a good grasp of the location and ability to overcome the challenge in the most effective way. By keeping the hustle and bustle of the city life outside, peace and tranquility at home is accomplished. Plus, it’s a lush courtyard in the design that adds up to a salubrious atmosphere in which to live.