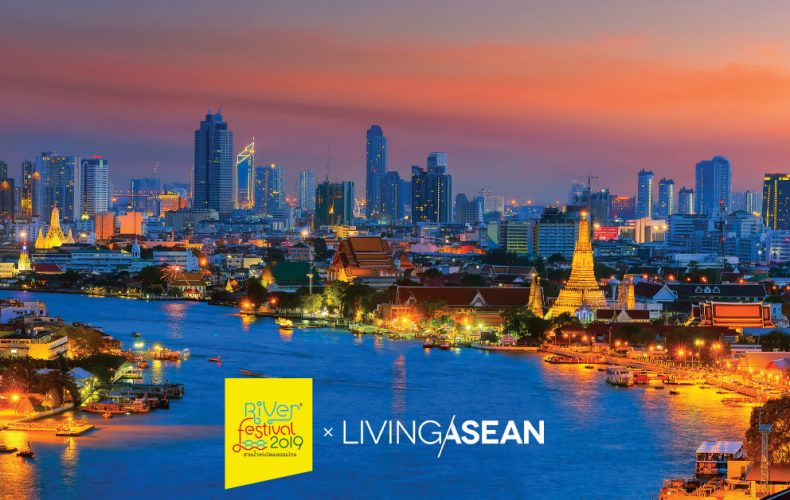 Every river has an amazing true story to tell. To celebrate our beautiful and fulfilling culture and heritage, ThaiBev is happy to support the tourism industry’s River Festival 2019 scheduled for November 9-11 in Bangkok. Now in its fifth year, the landmark event recognizes the importance of the ASEAN Cultural Year 2019. Everyone is invited to experience the charms of civilizations situated beside the river at 10 cultural heritage waterfronts along the Chao Phraya River during the three-day period. They focus on the concept of “River Consonance”.

The Thai Beverage Public Company Limited, or ThaiBev, is assisting with this effort in close cooperation with the Ministry of Culture, the Ministry of Tourism and Sports, the Royal Thai Navy, the Bangkok Metropolitan Administration, the Tourism Authority of Thailand, and a network of business partners. Together, they are able to draw on prior experience to make the fifth edition of the River Festival a continuing remarkable success for 2019.

This year, the Foreign Affairs Ministry’s ASEAN Affairs Department also joins forces. Its contribution to the “River Festival 2019” supports government policies that are aimed at making Thailand a center of cultural tourism and engaging with worldwide audiences. The show is timed to coincide with the ASEAN Cultural Year 2019 proclaimed to raise public awareness of the identity, diverse culture and heritage of the Region.

The driving forces behind this year’s celebration include Mr. Itthiphol Kunplome, Minister of Culture; Mr. Suraphon Svetasreni, President of the River Festival 2019; and Mr. Kamolnai Chaixanien, Senior Vice President of the Thai Beverage Public Company Limited; as well as main sponsors from the private sector and partner networks. Details of the River Festival 2019 and the “River Consonance” concept were given during a press conference at Wat Kalayanamitr.

The ornate shrines and vibrant street scenes are located on the banks of the Chao Phraya River. They are some of the most visited destinations among pilgrims as well as foreign tourists and locals. During the three-day festival, visitors can enter the five temple grounds and pay homage to the Buddha at night. Or stop and take a moment to admire the beauty of the Chao Phraya River from all 10 riverboat piers.

Experience the charms of Thai culture and Thai identity at venues of historic significance on the bank of the Chao Phraya River. No better time than now. Soak yourself in the concept of “River Consonance” during the River Festival 2019, scheduled for 9-11 November 2019, 17.00-22.30 hours. For updates please visit www.riverfestivalthailand.com and facebook/riverfestivalthailand

The River Festival 2019 is an annual cultural celebration, which is now in its fifth year. Data collected from previous years indicated that participating retail businesses could generate incomes for local communities amounting to more than 2 million baht in three days. Each year, the event attracted more than 200,000 visitors, both foreign and local. Exit interviews showed more than 90 percent of visitors came away impressed about efforts at fostering the progress of Thailand’s culture through greater awareness of its heritage. To sum up, it’s a festival that contributes significantly to the betterment of society and culture, as well as the future of the tourism industry.

It’s an opportunity to come in contact with pop stars, among them Sinjaroen Brother, Praw Kanitkul, Nont Tanont and other celebs, who give concerts at Asiatique. While there, find out what the concept of “River Consonance” means to you, and what kind of music is the happening thing. Step in for a surprise. Plenty of music to enjoy both on the boat and on the piers, plus performances by the CU Band and CU Chorus from Chulalongkorn, and the TU band and TU Chorus from Thammasat. Not to mention country music by up-and coming bands from Kasetsart, Srinakarinwirote, Ramkhamhaeng, Dhurakij Pundit, Suan Sunandha Rajabhat, and Bangkok Thonburi universities. There’s also jazz and international by Silapakorn. That pretty much ensures that fun is had by all.

To celebrate a very important year marked by the coronation of a new sovereign, H. M. King Rama X of Thailand, a new riverboat pier is officially opened on the Chao Phraya River. The pier at Wat Rakhang has since been renamed “Pier 10”. The new call sign coincides with proclamation of 2019 as the ASEAN Cultural Year and the fact that the ASEAN Region has 10 members. The 10-pier system bodes well for the future of river traffic in the inner core of Bangkok, which is home to the longest river bend running through the capital.

To reiterate the importance of 2019 as the ASEAN Cultural Year, more VIP Cruises up and down the Chao Phraya River will be added for pleasure. Representatives of the international community will be invited to participate in various promotional activities, offering them the opportunity of experiencing the charms of Thai culture and interacting with members of the local community, from temples to schools to people’s homes. The heart of the matter is a multicultural neighborhood that’s home to three religions, four beliefs, and five ethnic groups who coexist peacefully in harmony at “Ka Dee Jeen”, a midtown area in Thonburi. The activity is cohosted by the Supatra Group.

Something of interest to the media is the “Unseen Cruise Tour”, a series of activities at Wat Rakhang Pier. Begin the day with a photo contest aptly titled “One Shot Knockout”, which is scheduled for November 10 from 07.30 to 14.00 hours. At nightfall, enjoy outdoor movies featuring two of the best of Thai cinema, น้ำตาลไม่หวาน (Sugar Not Sweet), and เกาะสวาทหาดสวรรค์ (Paradise Island) that were part of the exhibits at the Bangkok Art Biennale 2019.

The journey is incomplete without a visit to Lhong 1919 and Asiatique, two famous riverboat piers on the south bend of the Chao Phraya River. Plenty of activities and fun you can do for enjoyment. From here, you can travel on to SookSiam@ICONSIAM and take part in the celebration of its first anniversary. Along the way, collect rubber stamps as proof of having visited all three riverboat piers, and you can enter for a chance to win a “Happy Pouch” from the River Festival 2019.

The best event you can’t miss is the Loy Krathong Festival, which is happening at the same time as the River Festival in Lamphun. The venue for dual celebrations is the bank of the Kuang River that’s a lifeline of this beautiful northern city.

The River Festival Lamphun offers the opportunity of experiencing Lanna culture that’s renowned for exceptional northern hospitality. During this time, the street is full of locals and visitors as the crowd gathers to pay respect to Phra That Hariphunchai Temple, home of the gilded stupa that’s the heart and soul of Lamphun town. By night the sky is aglow under floating lanterns during the “Festival of a Hundred Thousand Lights”.

What makes Lamphun famous is the rich riparian ecosystems and forests that thrive within the city. Art lovers shouldn’t miss the art market where pieces are bought and sold through fairs and exhibitions in art shops. The festive season is a paradise for those looking for good deals on local products. Be spoilt for choice when it comes to authentic northern food prepared by locals as well as up-and-coming young chefs. By and large, it’s an immersive experience to enjoy in the lead-up to Loy Krathong Night on 11 November.