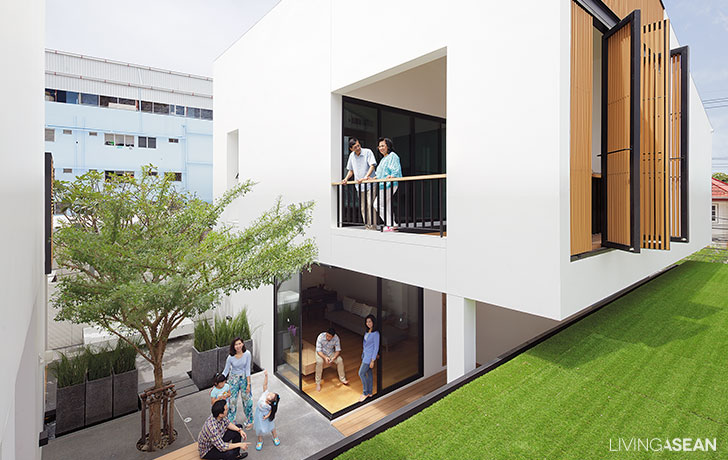 These twin houses are a kind of an in-between space that separates them physically. In a subtle way, the center court serves to perpetuate the spiritual bond between the two households. It makes for cordial relations and passion in the form of a shared space that gets used every day. It is obvious they have found the right balance. The owner of appealing twin house are two sisters, Chutima Bunnumkitsawat and Chutimon Siriwithayarat. Now married, They live in separate households that share the same compound. As anyone would expect, the twin residences look amazingly alike. But they are two distinctive entities. So we asked, and they answered.

“Originally They had planned on developing the property, on which we now live, to accommodate an extended family lifestyle. By chance, my husband came across one of the designs by Nat and contacted him right away before the big flood hit. We got down to the business of planning in earnest while the city was inundated in 2011,” Chutima said.

She said that the family has lived on this plot of land for three generations now, meaning those of Mom and Dad, the twin sisters themselves, and now the little ones.

Asked about design inspirations, Chutima said: “We both have kids roughly the same age. So family living spaces have got to be clearly defined. Simply put, we are two separate households now. Nonetheless, the two houses are set in the same compound. Mom and Dad can be with the kids here or there. Bottom line, our children will get to grow up together.”

Chutimon said that despite being two separate entities, the twin houses are subtly tied to each other in so many ways.

Behind the perceived sameness there exist a fair amount of differences. By permission, we take a look around only to find, as is often said, plenty of different details in the find print. First, their lifestyles subtly differ. Chutima’s home features a design with an emphasis on vertical treatments that embrace the value of the family’s intimate living spaces. Patches of greenery in the vertical garden protect the privacy of the living room and nearby patio. Lush foliage makes for comfortable interior living spaces. Now let’s move over to the other side of the center court. Chutimon’s home boasts open and light interior design featuring ample horizontal spaces. Reminiscent of the traditional Thai-style home, the family interior living spaces look out over and connect to the center court. The bedroom comes with an open, spacious balcony that is the family’s favorite hangout spot.

The awesome twin houses complex is the brainchild of designers Natasas Jeenphund and Yupayong Chaikachorntat of Poetic Space Studio. As they put it, “ The two homes highlight simple, clean line design. I want them to appear as two distinctive entities. It is like two well-pruned trees thriving side by side. Meantime, it is not about being totally separated. Basically, the plan is based on a design principle that aims to keep the two families very much together.” In a nutshell, the twin houses find the right balance not only in terms of land use but also in architectural style. More importantly, they bear testimony to passion and longing to be together and cherish the relationship made in heaven.