Quiet Interaction of Nature and Architecture 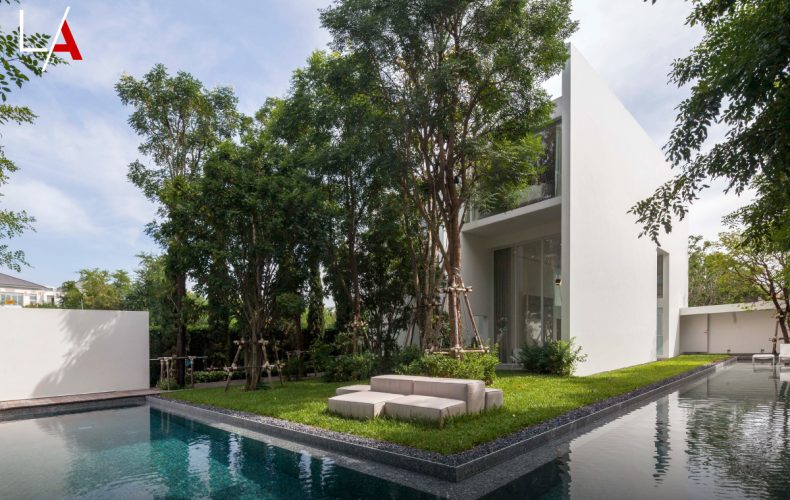 Quiet Interaction of Nature and Architecture

BANGKOK / Attaporn Kobkongsanti, his wife Romanee, and their young son Phumi have moved into their new house, which took six years to design and build. Now it shows a perfect picture, lofty white walls rising above its inspired design and meticulous construction.

“As an architect myself, I imagined a courtyard here. Having worked with Boonlert, I felt our styles were really in sync, and after a few iterations we settled on our fourth design, which is what you see here!” Pok, who is the owner not only of the house, but also TROP Landscape Architects, is referring to Boonlert Hemvijitraphan of Boon Design, his co-designer. 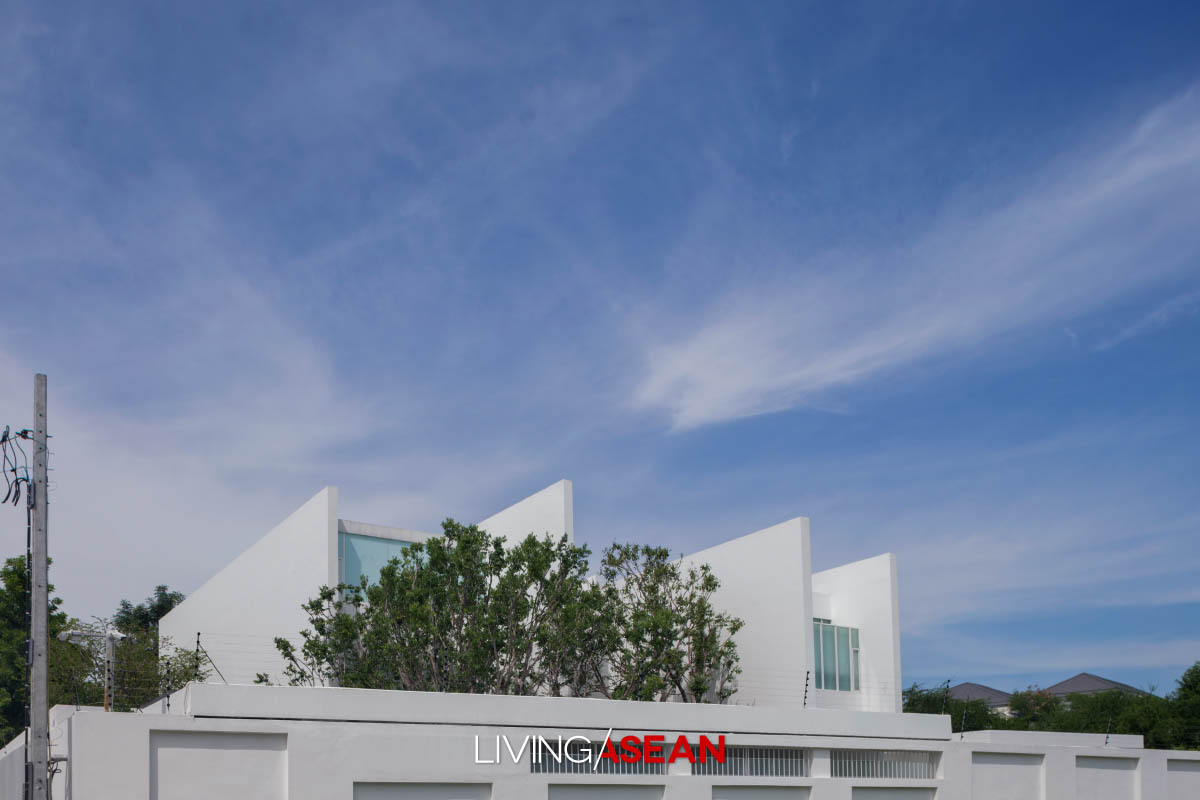 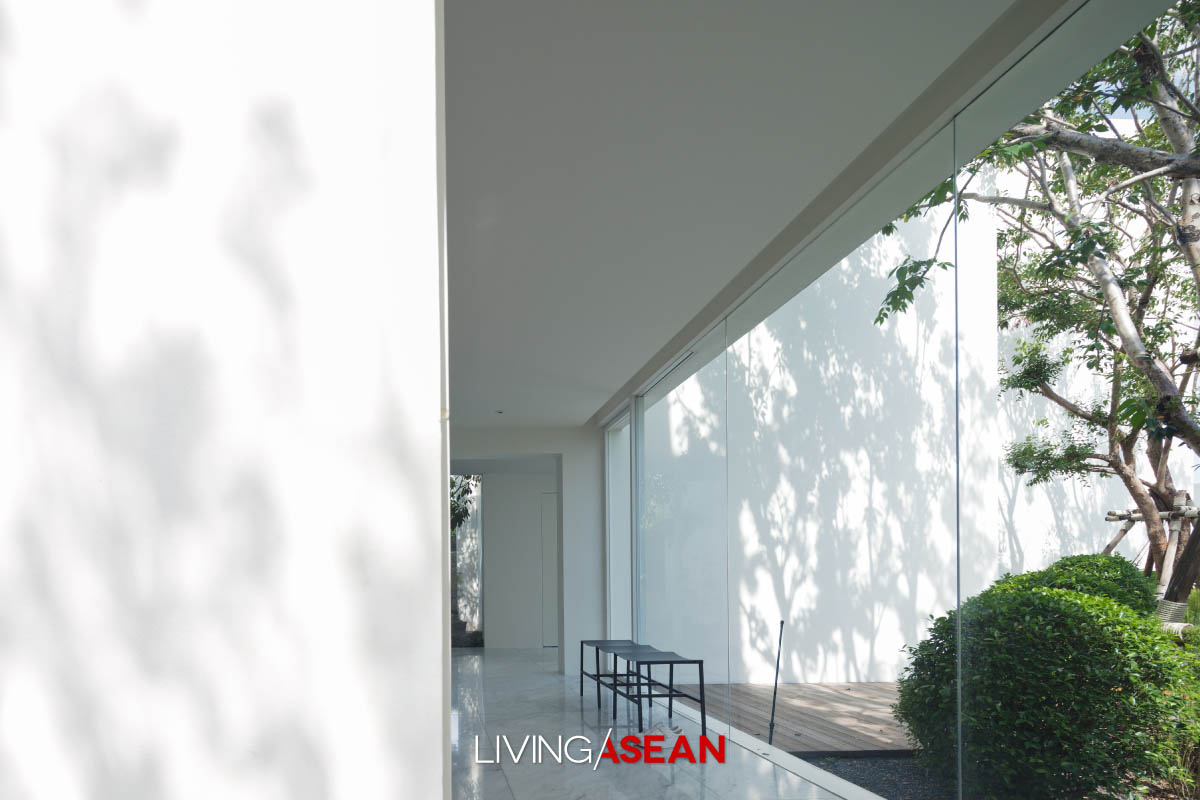 Boonlert adds, “The relationship between the house and nature is always at the core of our design work. The owner’s imagination is what makes this one unique. We began with a set of high walls with the separate spaces between them assigned to different uses. We call this concept ‘series of wall.” 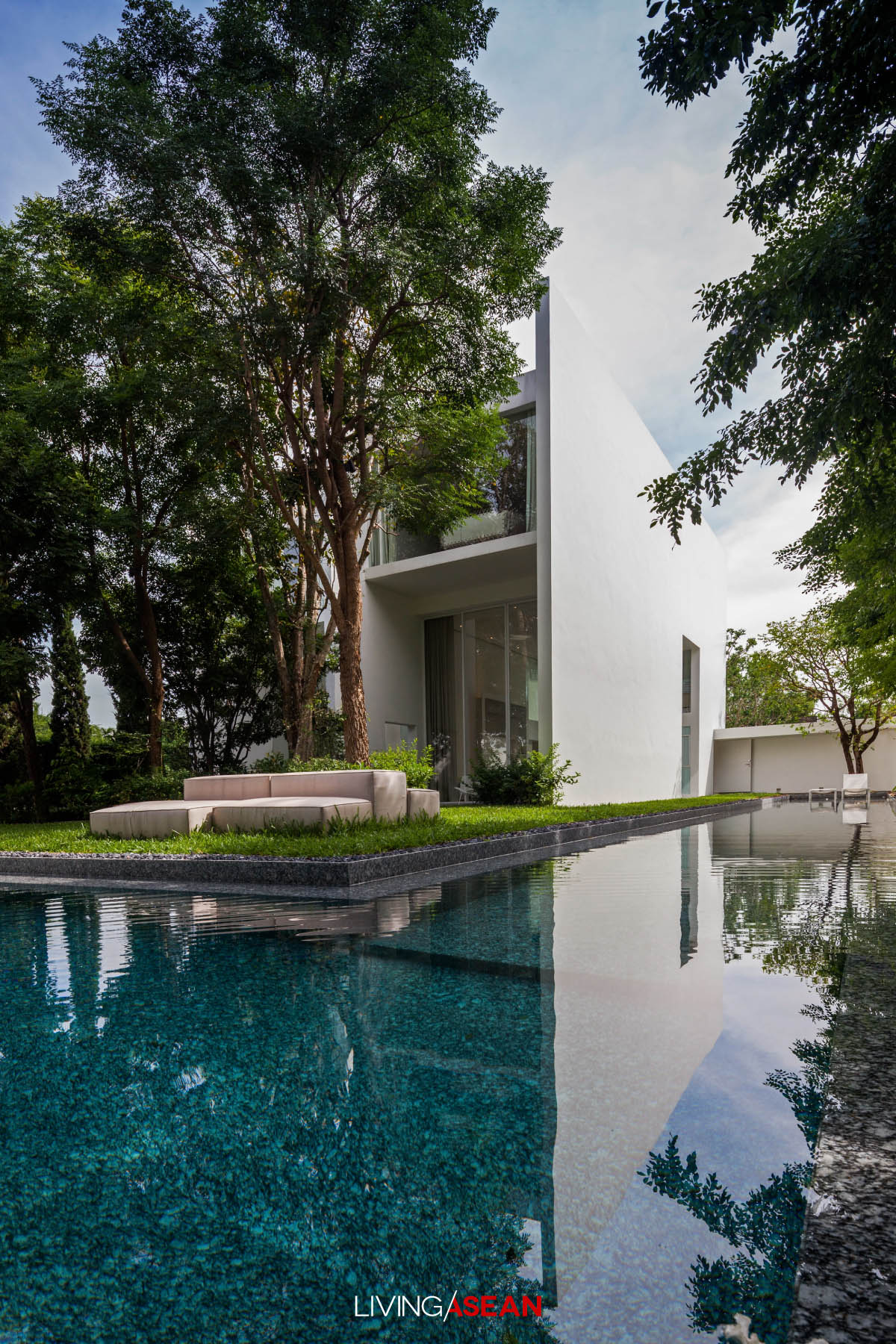 To the architects, “series of wall” is expressed with four very tall walls set in parallel that establish the frame of this 3-storey house. The walls are set between 2.5 and 5 meters apart, protruding out beyond the main body of the house, with varied height and length according to functionality of the spaces between. Floor 1 holds living room, dining area, and kitchen. Husband and wife have a workroom on the 2nd floor, and bedrooms are on the 3rd.

The personalities of the in-house gardens differ according to position. At the east entrance we see a mixture of kitchen vegetable and decorative garden they call the “moon garden,” since a moonrise is especially gorgeous from there. Special attention was paid to its beauty, as it is the first garden we see when getting out of the car and the last before leaving.

Next we encounter a triangular courtyard, inserted in the living room! This is an architectural artifice to bring light into a darker area. It opens the living room right out on the swimming pool and at the same time welcomes us into the room, creating an intriguing space facing both inward and outward. 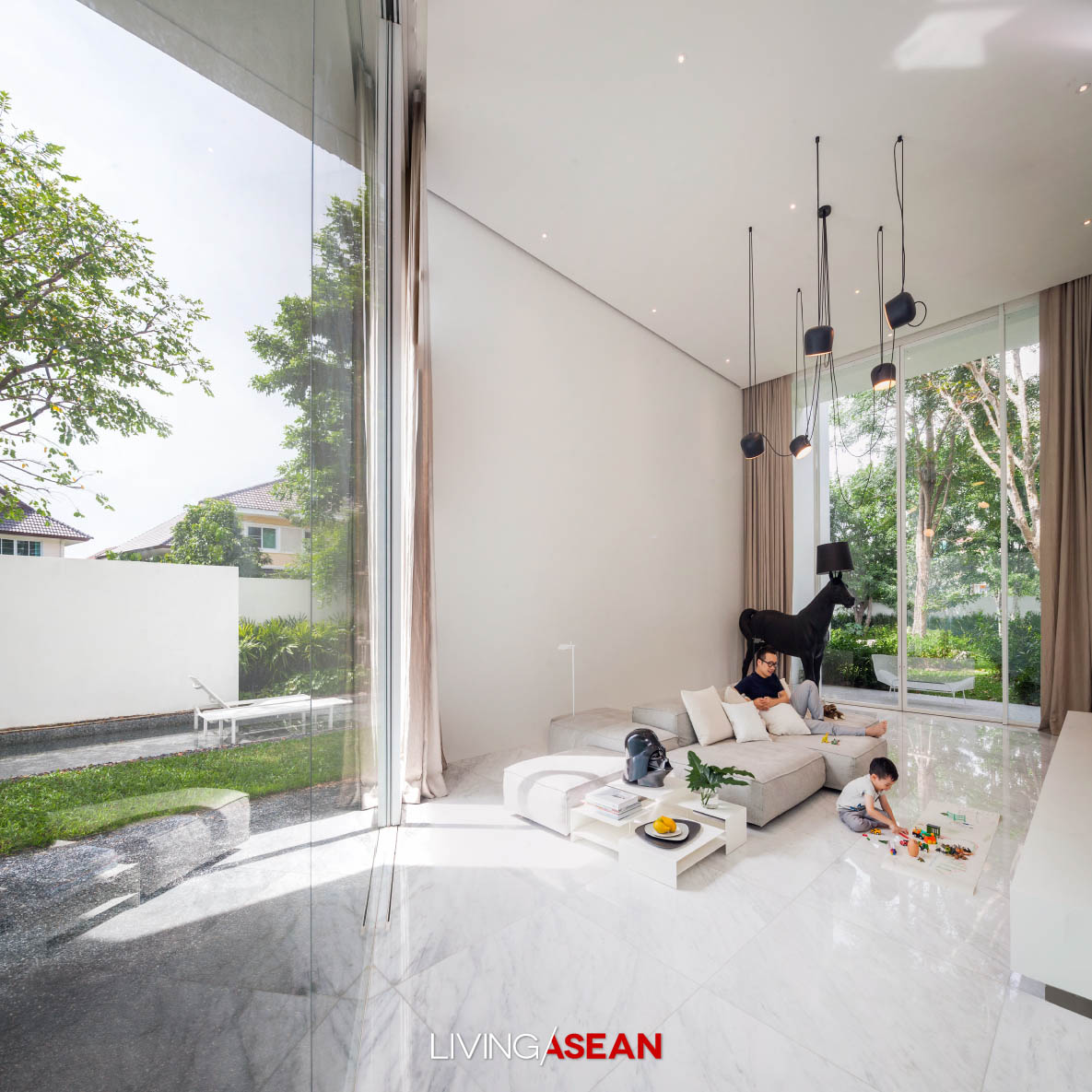 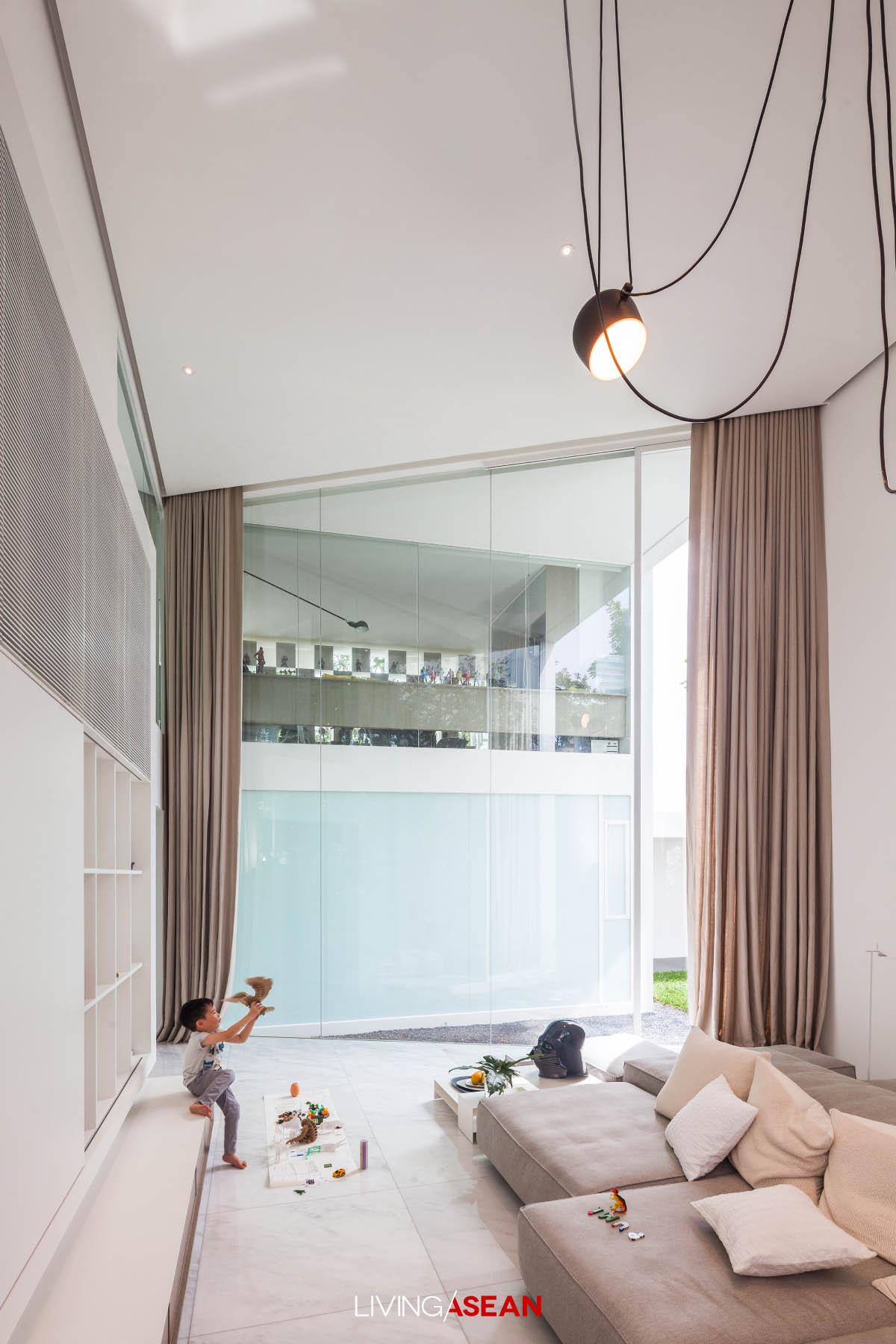 Closing off areas between walls before assigning them functions as rooms gave the look of, as the architects put it, “putting people in the in-between spaces.” Areas of use are rectangular, enclosed lengthwise between the walls. The front and rear of the house are all floor-to-ceiling clear glass, for a free, airy feeling everywhere, the natural world outside shining through into the home. The walls are thick, blocking the sun’s heat from the north and south. The glass sides bring in the sun’s natural light as it moves from east to west, keeping the house bright and cheerful all day. 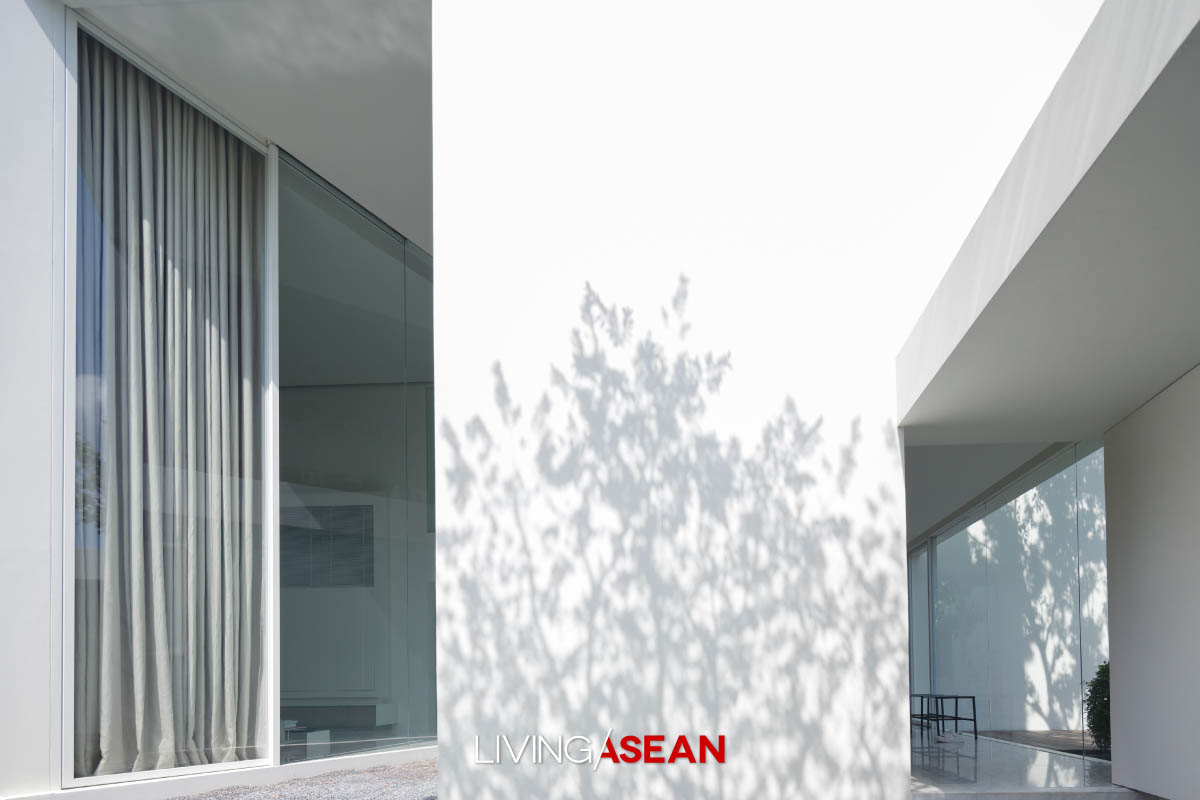 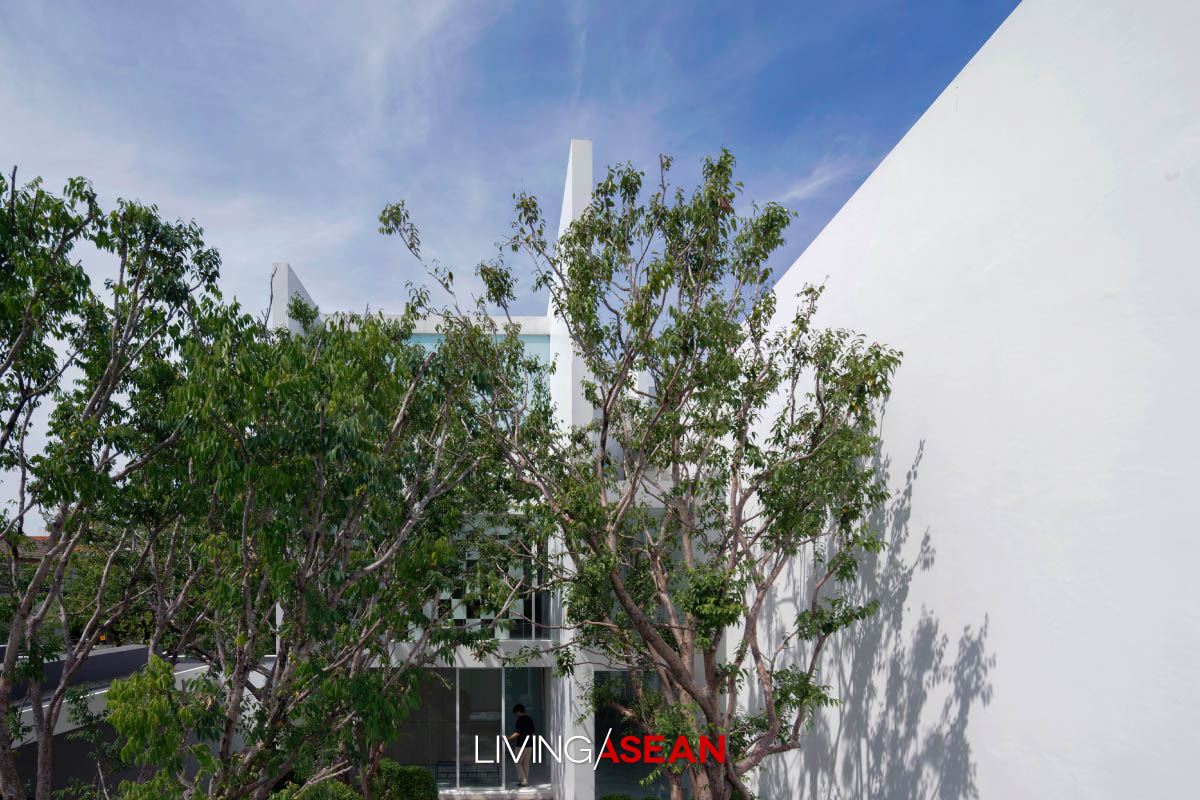 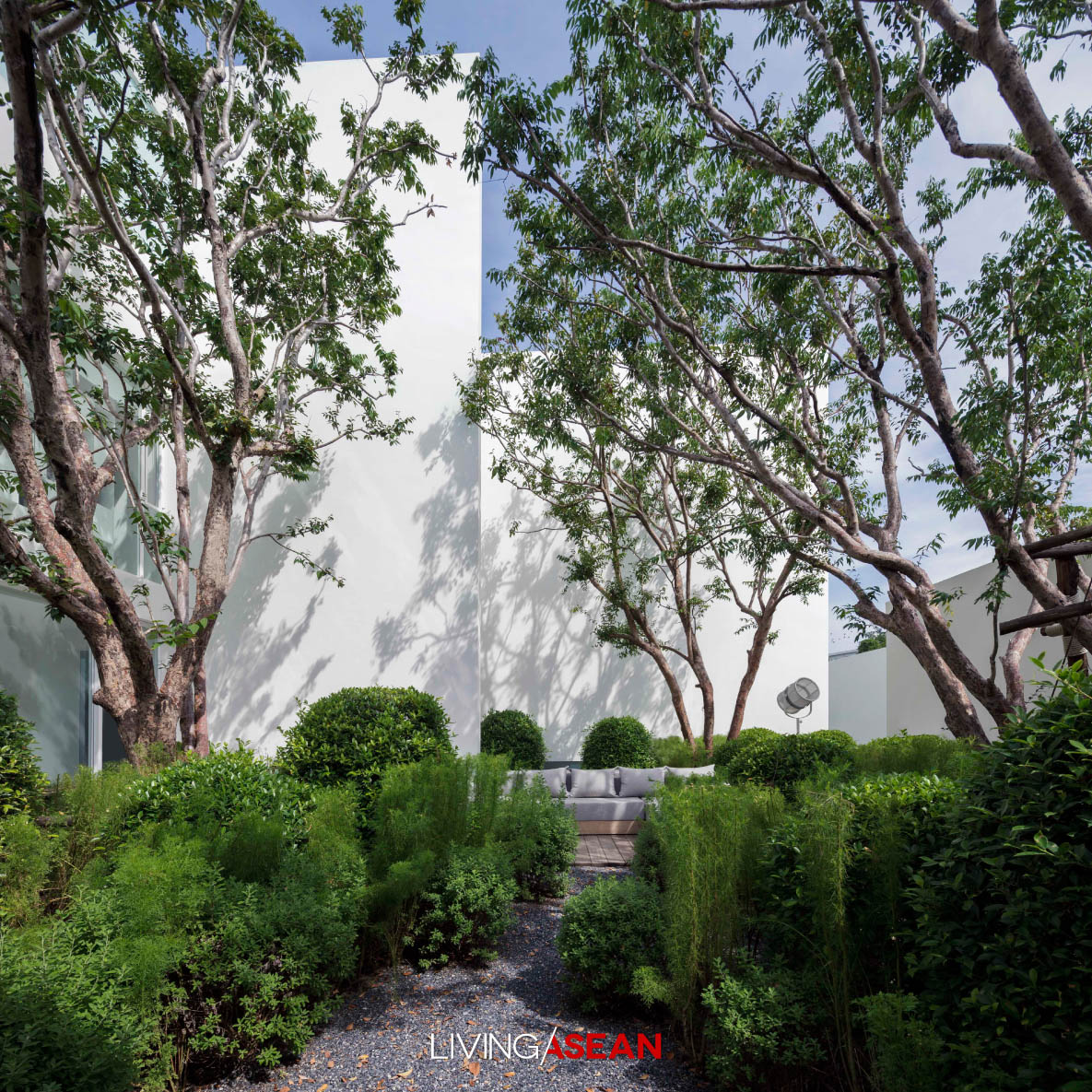 The walls also facilitate inner courtyards that are part and parcel of the livable space and bring the outside garden in, using the owner’s unique talents and experience to incorporate landscape architecture into the building itself.

“This wasn’t easy,” said Pok. “We wanted it all, here, there, everywhere, but when you do it you always worry it might be too much! We went back and forth, and in end we chose the most orderly form.” 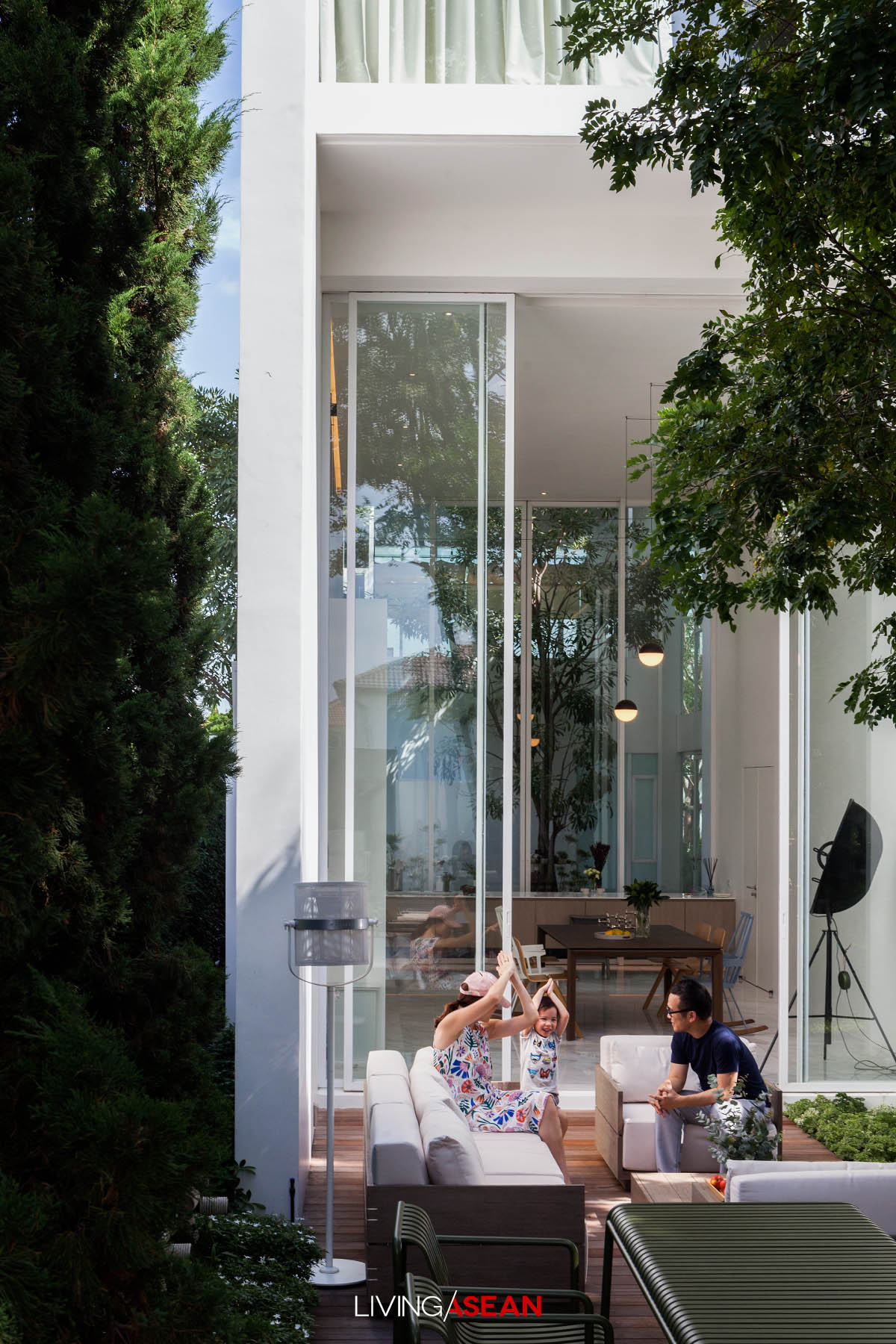 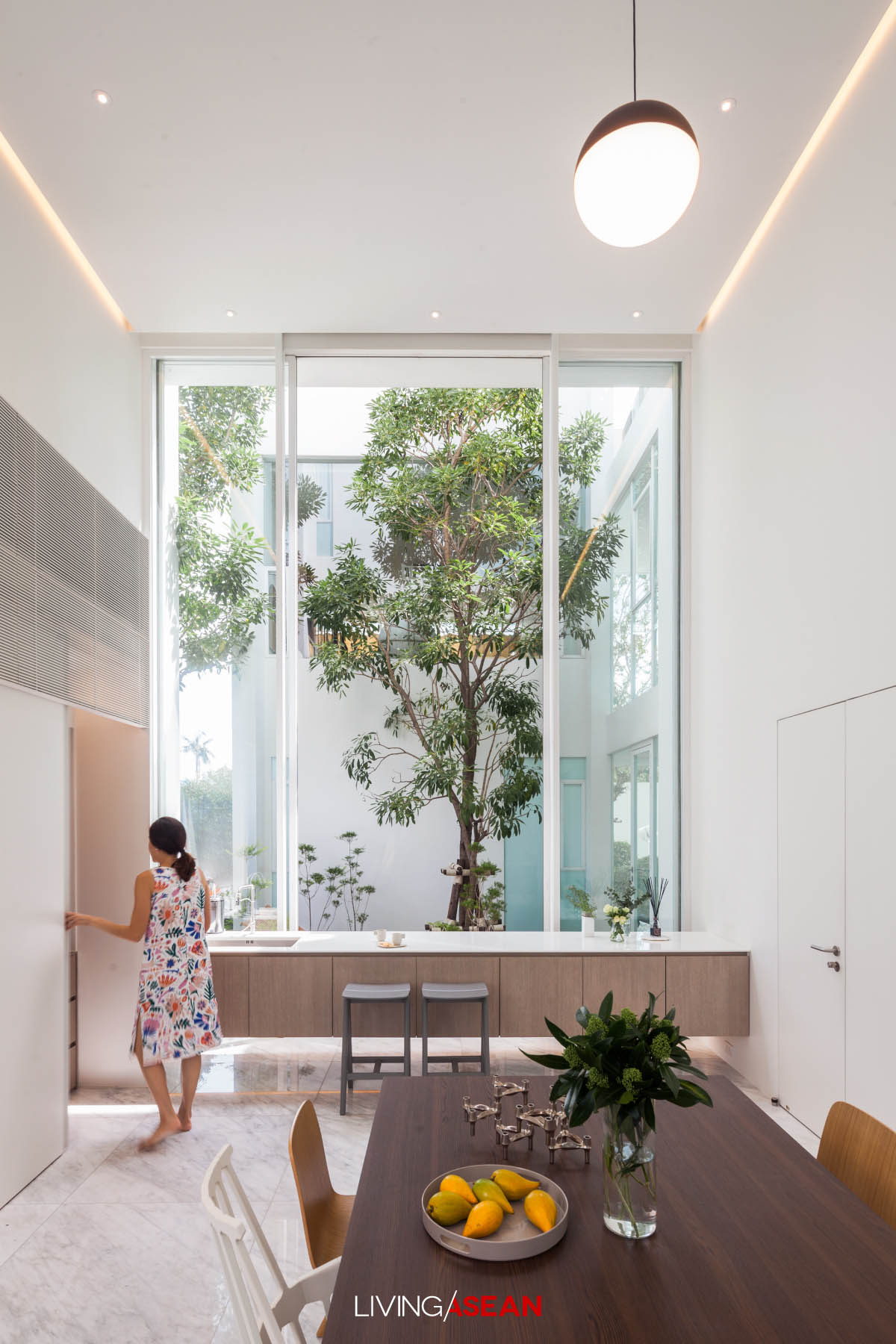 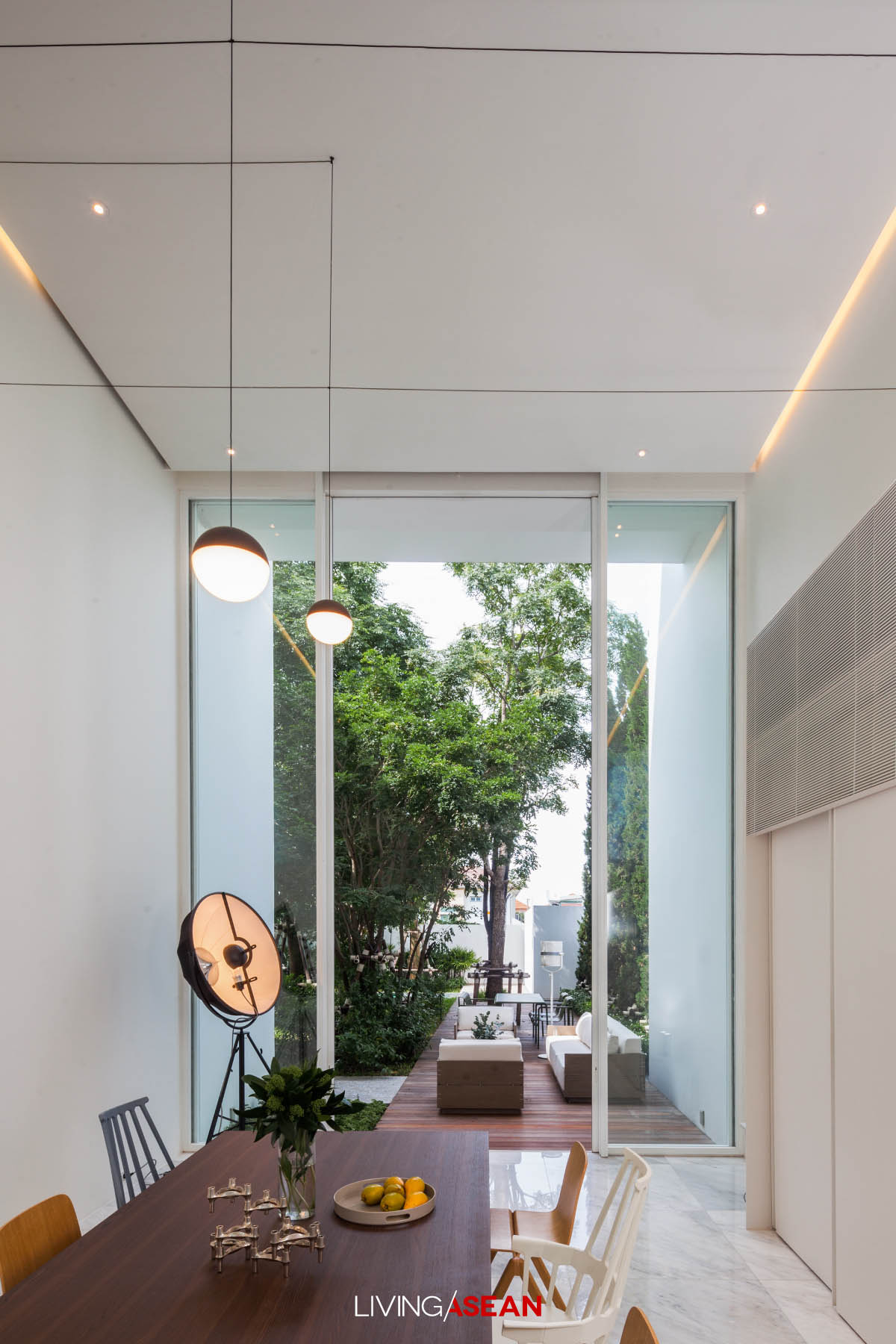 In the kitchen there’s yet another large courtyard. This one helps draw light and clean air into the various rooms from the topmost down to the ground floor, and connects with a forest garden behind the house to the west. Between house and fence is a copse of trees that filters the afternoon sun, a space used just to relax, or perhaps for a party.

The L-shaped swimming pool is landscaped in with a neat wooden porch that fits perfectly with the tall trees Pok has freely planted all about. This garden also connects to the living room through a large clear glass door, creating even more unity between indoors and outdoors. 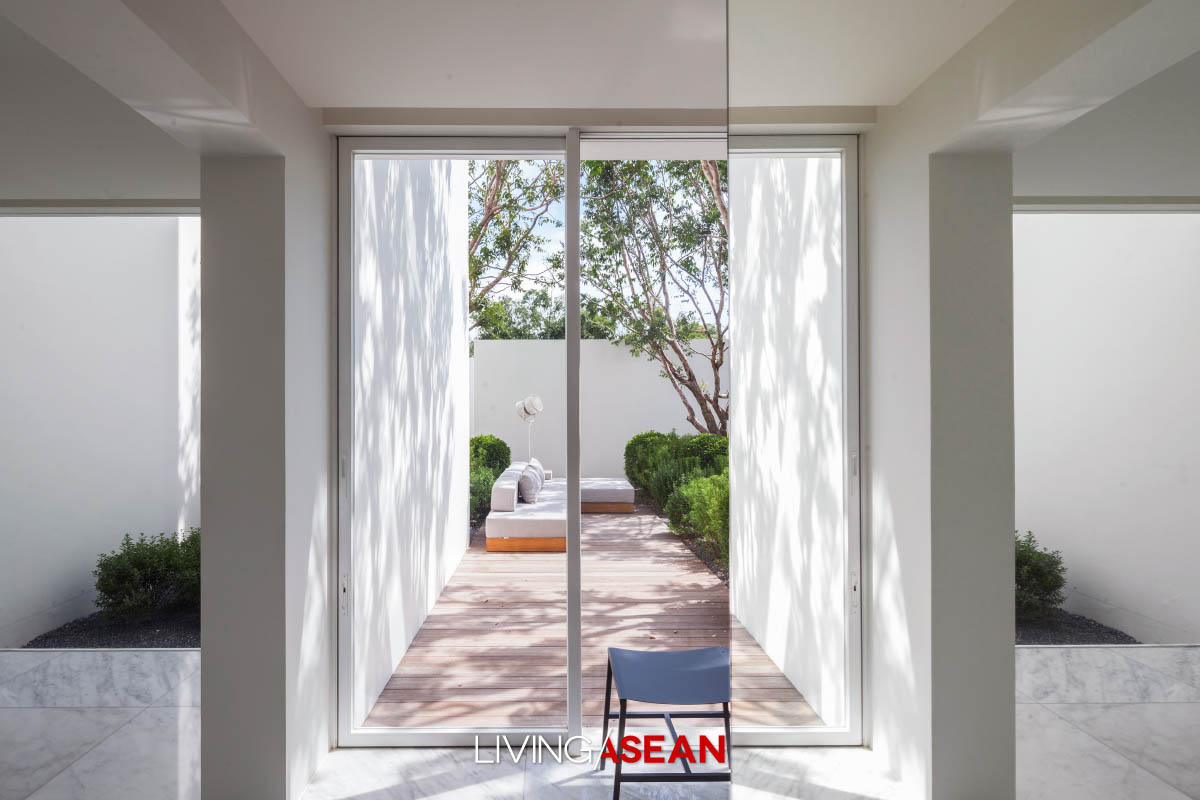 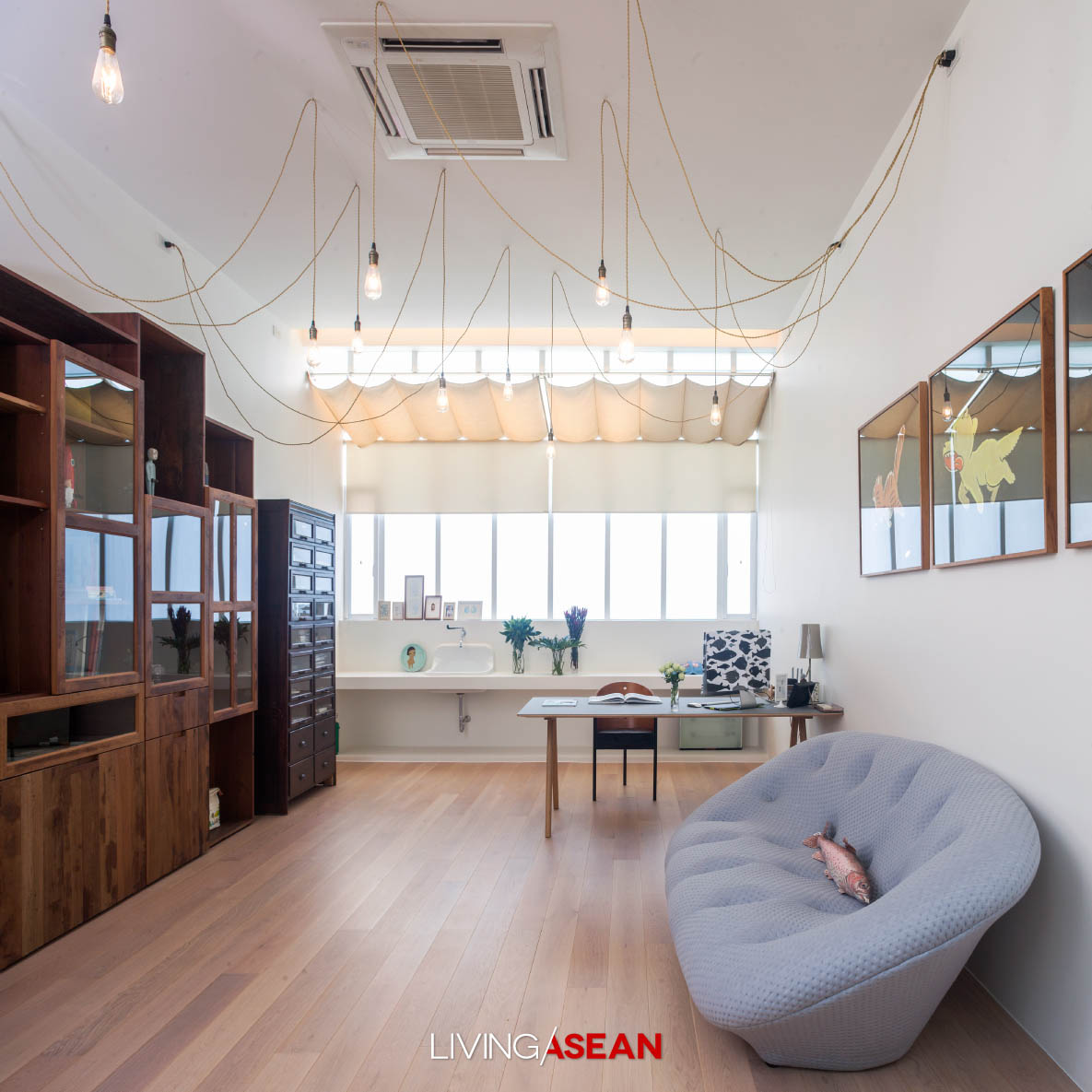 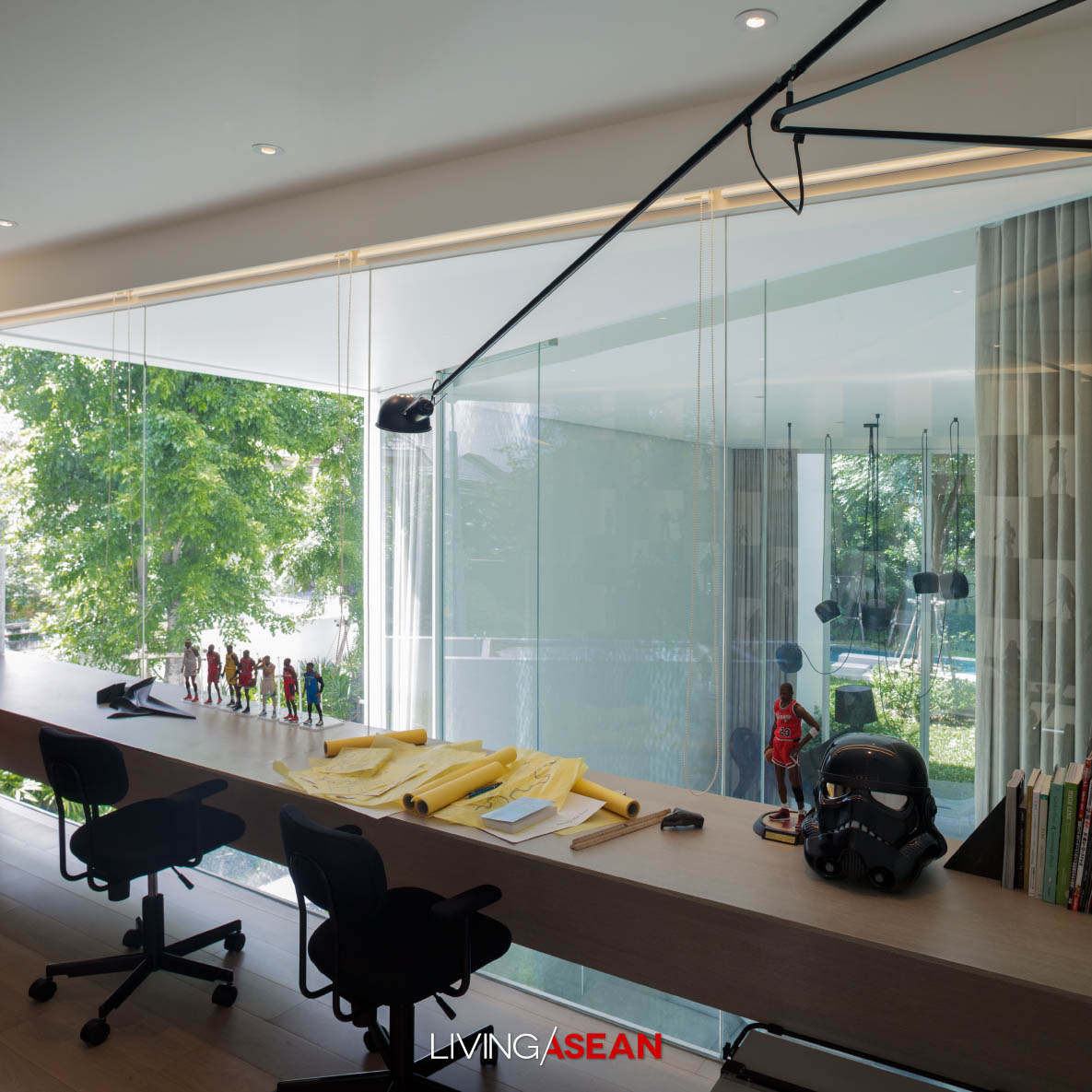 The house glass reflects the darker forested area in a wavy green. Our landscape architect compares it to an abstract painting by nature itself, saying it took away any need for hanging pictures on the walls, which are bare, like a white canvas, waiting for nature as the single artist to brush it with light. 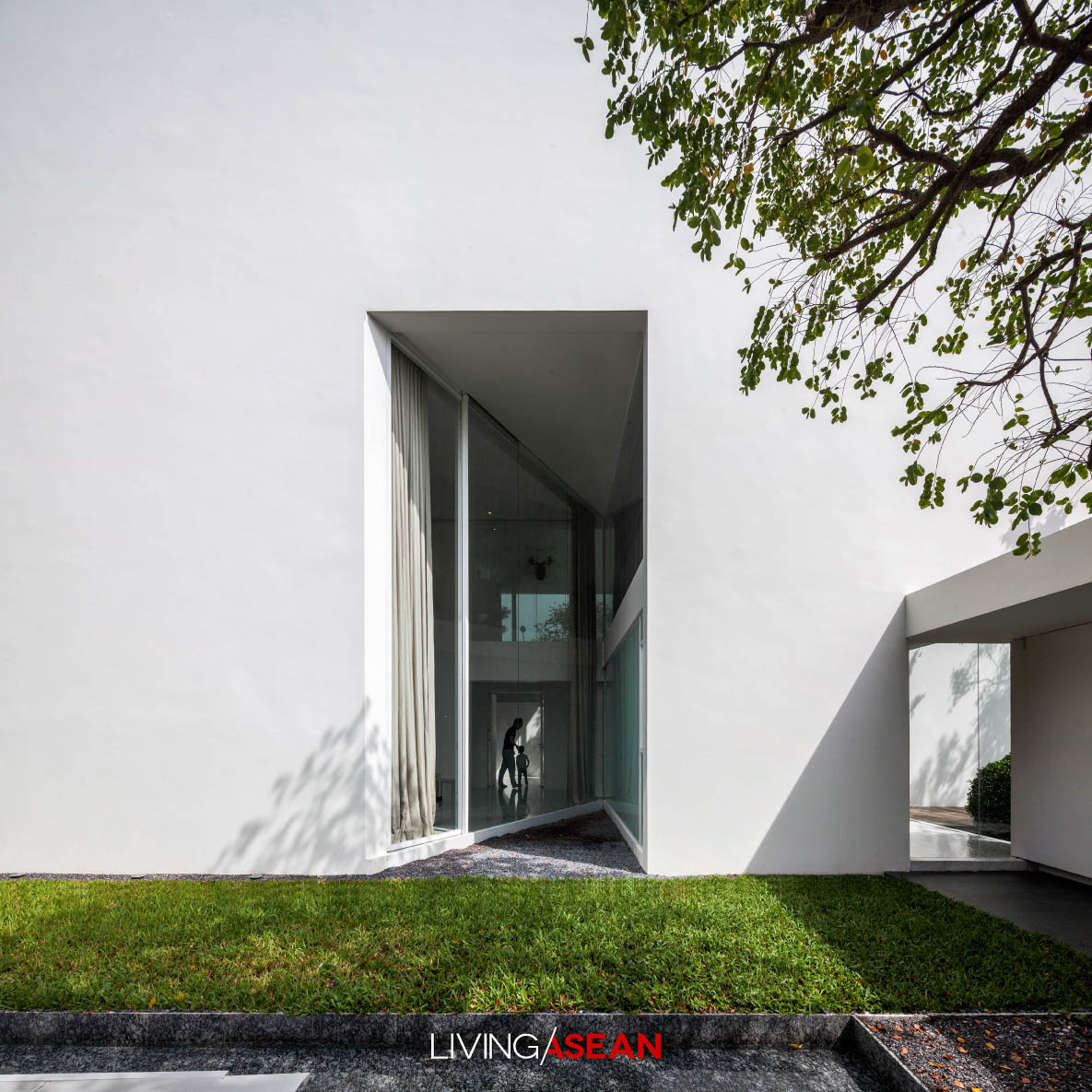