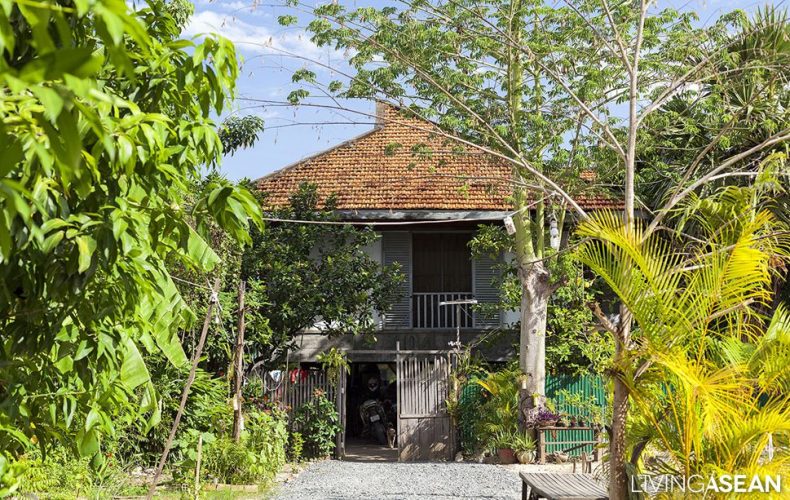 Bringing the design concepts of  Le Corbusier to Cambodia, the legendary architect Vann Molyvann completed his 100 Houses Project in 1967. 50 years on, what do we see there now?

Before the Khmer Rouge period, Vann Molyvann was Cambodian architecture’s biggest star. After receiving a 1946 scholarship and studying in France he returned as Cambodia’s National Architect, combining modernist with traditional Cambodian design to produce such grand works as the Chaktomuk Conference Hall, Olympic National Sports Complex, Institute of Foreign Languages, and the “100 Houses Project,” designed as employee housing for The National Bank of Cambodia at Phnom Penh. “100 Houses” was started in 1965 and completed in 1967. Typically a Project house is a concrete structure holding a large living room and bedroom, raised above the ground with a 7.2 meter span between support posts. Floor, door and window frames, and roof frame are of wood. The roof has a Cambodian-style slant, and for good ventilation, windows reach almost to the ceiling. Kitchen and bathroom are built separate from the main house.

After the Khmer Rouge takeover and the massive changes it brought, Vann Molyvann moved to Switzerland. Many of his creations such as this project were abandoned and overgrown, or randomly preempted by new occupants. Living ASEAN recently visited Tuk Thla district to find out how the village looked after all this time, and met Martin Aerne, Swiss architect and teacher, who now lives in one of the “100 Houses.”

Martin Aerne tells us about coming to Cambodia, meeting Vann Molyvann, and discussing how to preserve works from the age of New Khmer Architecture. This prompted him to rent a space and open an architecture office on the upper floor of a Cambodian family home.

Martin notes that for privacy, homes in the Project are designed with alternating levels. Bedroom windows of one house aren’t open to view from the  next. The porch of one house looks out on the garden of another. And even with no common garden, there’s green everywhere.

Not many of the old-style houses remain: new owners have demolished them, rebuilt, or added on willy-nilly with no thought to historical value. Two or three abandoned houses from the original project are fortunately still here, since even in their ramshackle state they’re a great aid for studying Vann Molyvann’s amazing work from the 50s  and 60s, of which on a 1967 visit Singapore’s Prime Minister Lee Kuan Yew said, “I hope, one day, my city will look like this.”