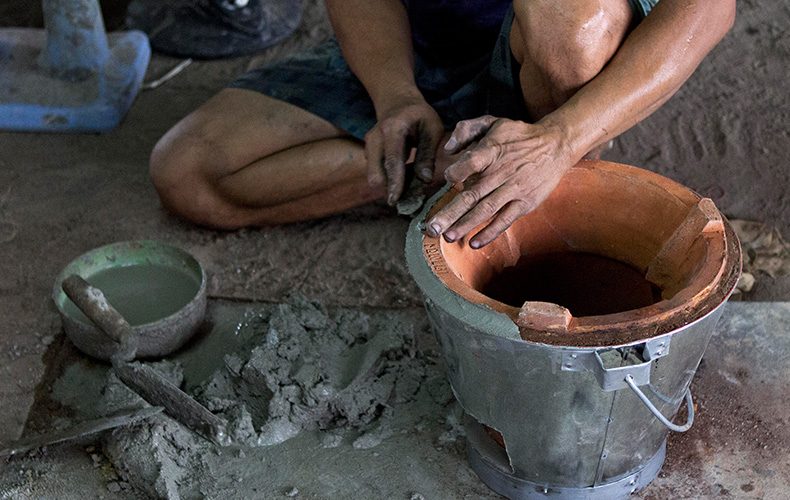 The old-fashioned cook stove known as “Ung-Lo” has long been a manifestation of traditional knowledge of the people of Thailand. It’s fair to say that the charcoal stove can make food taste and smell better than can gas-fired cooking ranges. Precisely, nothing can replicate the natural smoky flavor of char. Nowadays, although the ubiquitous influence of gas-fired cooking ranges is felt by everybody, there’s always a demand for the charcoal stove. That said, we believe there’s at least one “Ung-Lo” in practically every household to meet every cooking need, whether it be barbecuing low and slow or cooking with high heat.

Ruam Sukhawattago is owner of “Gold Stoves,” an old manufacturing factory located in Ratchaburi Province. He kindly takes a break from work to show us around and share his experience. No doubt it’s an opportunity to observe traditional knowledge at work and see how the cloning process has evolved over time to fit modern circumstances. In the process, Ruam succeeds in crafting a fuel-efficient cook stove that he calls the “Super Ung-Lo.” The product is made from materials sourced directly from the community, such as clay and rice husk ash. In all, the handcrafted cook stove takes ten days from start to finish. First of all, clay goes through a curing process to become liquefied overnight. Then the soft clay is mixed with soil and rice husk ash. The ratio of soil to ash is 2:1. Work the moistened clay mix into paste with the hands until it’s thick and malleable enough to be molded to its final shape.

Let it cure for 12 hours before attaching three cooking pot supports to the inside wall of the fire chamber. The support points should be raised slightly higher than the mouth of a stove. Rub off the rough edges on the clay surface to give it a nice finish. Cut an opening in the lower part of the wall to make an air inlet. Then, let stand for five days before putting it in a kiln, where the clay stove becomes hardened by heat.

Next is the making of a perforated clay brick or grill that separates the fire box from the ash chamber below. The lower room doubles as air inlet and ash removal port. The round grill prevents the fire from falling into the space underneath. Traditionally, a total of 61 holes are made while the brick is soft and easy to cut. The grill is fired at the same time as is the stove body.

From the kiln, the hardened earthenware is placed inside a metal casing for protection. The void space is filled with rice husk ash for heat insulation. Finally, it’s time to seal the top circumference with cement mix and install the perforated brick to complete the process. The “Super Ung-Lo” cook stove is designed to save fuel in line with the policy of the Department of Alternative Energy Development and Efficiency. It differs from traditional cook stoves in that: Touring the factory, we come across so many cook stoves to the extent it gets us thinking about the future of the age-old industry. Will this occupation continue to have pride of place in modern circumstances? Interestingly enough, Ruam replies:

“At one time, the US Embassy invited me to join my counterparts from Laos and Vietnam for a meeting on Ung-Lo making in Vientiane. I represented Thailand in that event. At the time, many versions of cook stoves were discussed and compared in a bid to identify a design that produced the highest heat, had the least impact on the environment, and the most energy efficient. The Thai Ung-Lo proved to be the case. It started a fire in the least amount of time. By comparison, it produced the highest heat with water reaching the boiling point very quickly. In fact, the kettle boiled twice while the Vietnamese stove had only just started a fire.

“It turned out that theirs was a biofuel stove, which produced a lot of smoke. Experiments showed the Thai stove was made to a high quality standard. I couldn’t help wondering why the Americans were so interested in the Ung-Lo. Their answer was that 20 years from now, humans would have turned around to using traditional cook stoves due to natural gas being used up. Oils derived from petroleum would have been depleted less than 50 years from now, unlike wood which is a renewable product. So, now I understand.”

We came away feeling good knowing we have formed friendships and understanding with each other. It made us happy to go by the saying, “Whatever you do in life, do it for love.” Ruam Sukhawatago no doubt was of the same opinion.

For a chance to visit the “Gold Stoves” factory, or get yourself something good like a “Super Ung-Lo,” call 08-7977-8677 for information.