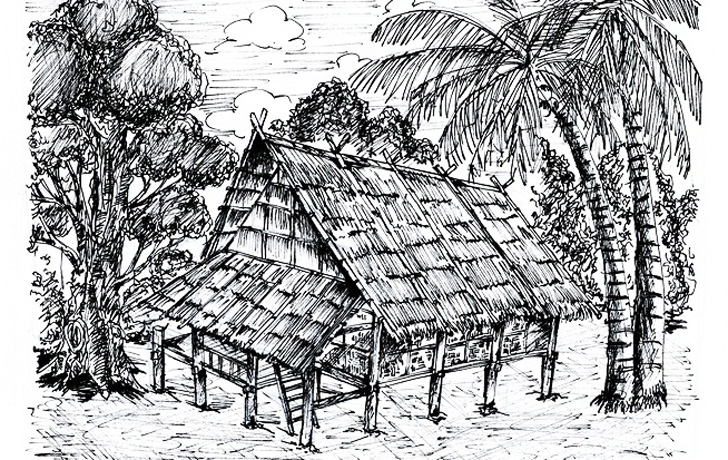 Laos, officially the Lao People’s Democratic Republic, is one of ten ASEAN members. There is more to Laos than Luang Prabang, the beautiful old city and World Heritage site. The country is also known for beautiful culture, unique traditions, and pristine landscape.

In this episode, we take a look at an aspect of vernacular architecture that had flourished there before the advent of French colonial influences. A team of Lao interns takes delight in presenting five roof types that have come to characterize the way of living of our closest neighbors since time immemorial.

Since a very long time ago, the Katu tribe has lived together in small villages. Their houses are arranged in a circle and oriented to face one another. Each house has two entrances — one in front, the other at the rear.

The traditional Katu house is raised on piles with a thatched roof that extends to cover the front porch, balcony, and stepladders. The entire roof is covered in thatching made from dried vegetation, such as broad-leaved grasses and Ceylon oak leaves. There is an animal figurine on the ridge of the gable roof. According to tradition, the small figure is believed to have supernatural power capable of protecting the building and people living in it.

There are no room dividers of any kind. Family members live under the same roof and share the same interior living spaces. Nowadays traditional Kratu homes can be found in Sekong, Salavan, and Champasak provinces in the south of the country.

Homes of the Akha tribe are crafted largely of local materials, like timber and earth. Basic roof frames and support beams are fastened together using vines harvested from the natural surroundings. The gable roof is covered in thatching made from dried Ceylon oak leaves. The Akha home features extended roof eaves on all four sides, which help divert the water flow away from the building. What’s unique is that it has no windows. This and other features combine to effective protect the interior living spaces from the elements especially during winter months. The Akha tribe lives mostly in the northern country known for its temperate climates. The region includes the provinces of Phongsali, Luang Namtha, and Oudomsai.

The Akha tribe believes men and women should live separately. Thus entering the territory of the opposite gender is forbidden. That explains why room dividers are a must in the Akha home, where each gender is entitled to its own private space.

Similarly, homes of the Oi tribe are houses on stilts made of timber and thatched roofing. The difference lies in its interior design. The Oi house typically comes with a bedroom reserved for the married couple that live there. There is a separate space that is used either as shared bedroom or as living area for unmarried family members. The kitchen space lies also part of the interior.

The Oi house offers two balconies – one in front, the other at the rear. Tradition dictates that adult males and females live separately until they are married off. The Oi tribal is a small ethnic group living in the southern country, mostly in Phu Luang District.

The Taliang tribe lives in thatched houses made of bamboo pallets in generally cooler and wet climates of the Lao PDR. That pretty much explains why their houses are windowless. Roof thatching is made from dried vegetation, such as broad-leaved grasses and Ceylon oak leaves. Unlike those of other ethnic groups, the Taliang home comes with three doorways, one on each porch. The entire family sleeps together in one big hall that is a shared bedroom. The interior offers a fireplace to keep warm during winter months.

Taliang houses are arranged in a circle similar to those of the Katu village. There is a center court where tribal ceremonies and rituals are held. The Taliang live in the hill country in southern Laos, which includes the districts of Dak Jung, Lam Mam, Thateng in Sekong and Champasak provinces.

The typical Khmu house is raised on short piles only about one to two meters above ground. The front façade boasts an awning roof that protects the entire front porch from the elements. Unlike those of other ethnic groups, the Khmu house is accessible via a single set of stepladders. The Khmu thatch-roof house has no windows. The crossbeams that are parts of the roof frame also double as storage for household essentials. Exterior walls are crafted of bamboo pallets, while the interior space consists of a large bedroom, small bedroom, living room, and kitchen. Men and women gain access to the house via the single entryway.

The Khmu tribe lives in the high country about 500 meters above sea level. To avoid gusty winds on the highlands of northern and southern Laos, the Khmu have learned to keep their houses low to the ground. Interestingly enough, aerodynamic design comes naturally to them.