Sanam Luang Then and Now: A Glimpse from the Past 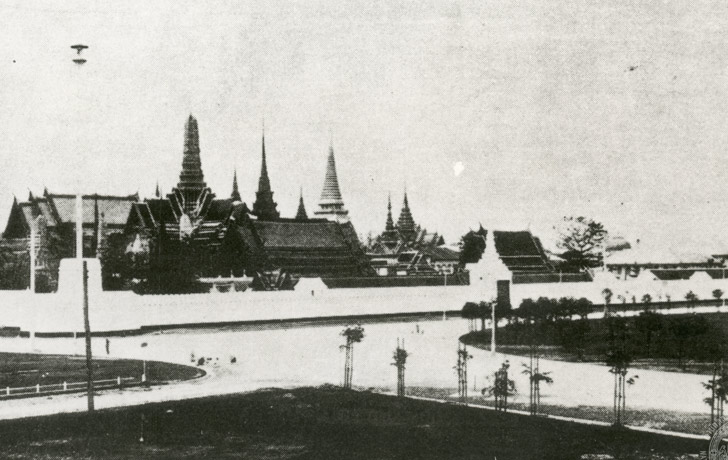 Sanam Luang Then and Now: A Glimpse from the Past

Come October 26, 2017, the people from across the country will converge on Sanam Luang in a show of respect, appreciation, and gratitude for their most beloved monarch. Royal cremation in honor of the late His Majesty King Bhumibol Adulyadej is scheduled to take place right here on the open field north of the Temple of the Emerald Buddha and the Grand Palace.

Fit for a king, the royal funeral ceremony took many months in the making. Detailed design and planning culminates in a superlatively crafted Royal Crematorium that stands embraced by beautiful pavilions at the center of Bangkok’s cultural landscape.

The architectural masterpiece will be the venue of a landmark event as the citizens traverse hundreds of miles to bid their beloved king a fond and final farewell. It will be touching moments for many Thais, hence a tremendous turnout is to be expected.

Formerly known as “Thung Phra Main,” which is Thai for Royal Cremation Ground, Sanam Luang is more than just an open public square. It’s a million memories in the lives of many citizens. Traditionally it’s here that kings and queens and high-ranking royalty were honored in the most appropriate of ceremonies at the end of life’s journey.

The like of which is happening on Thursday the 26th of October, when people turn out in full force to show their respect and utmost admiration for the late King Rama IX of the House of Chakri.

For the record, the field has undergone several name changes over time. As a royal funeral ground, it was appropriately called “Thung Phra Main” during the reigns of King Rama I and II. It became a productive rice paddy field in the period of King Rama III. Later it was King Rama IV, who renamed it “Thong Sanam Luang” – purportedly because the old name did not bode well for the future. The new identity caught on fast as it was required by law.

Tamarind trees gave Sanam Luang its unique character. The landscape was improved during the reign of King Rama V, who had multiple tamarind trees planted along the perimeter of the field upon his return from travel to Indonesia. It was said that he was inspired by the palaces of the sultans of Yogyakarta, and Surakarta at the time.

A lot had happened since the centenary of Bangkok in 1882 and the subsequent celebration of King Rama V’s return from Europe. There were times when Sanam Luang was used for horse racing, golf courses, military hardware displays, flea markets, centenary celebrations, as well as R and R facilities for the general public. Not to mention outdoor spaces for picnicking, kite flying, and venues for political stump speeches. There were even times when the homeless were camping out and prostitutes accosting passers-by to offer service. One thing led to another, an attempt to revamp Sanam Luang went into effect in 2010. At one time the authority erected a perimeter fence around the field preventing public access.

After many months in the making, Sanam Luang (literally Royal Turf) was restored to its original glory and is now reserved for royal funeral ceremonies.