Fun Facts You May Not Know about Songkran 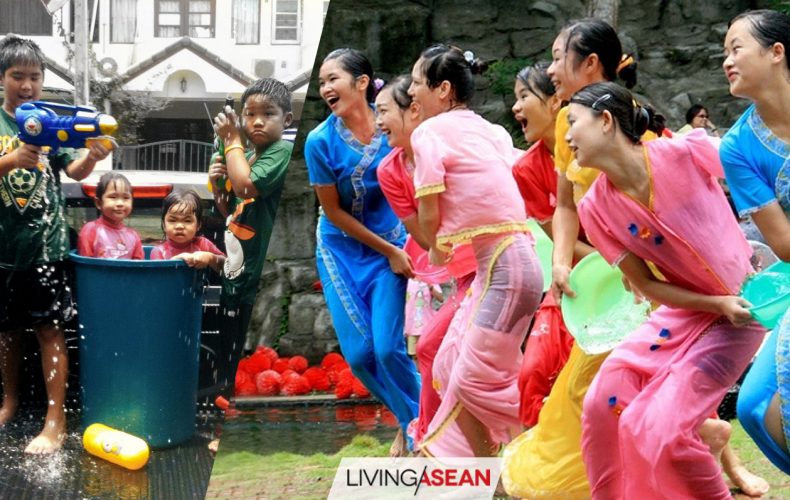 Fun Facts You May Not Know about Songkran

Did you know this? China also has its version of the water festival. Coconut rice in bamboo sticks is favorite holiday food in Cambodia. Let’s see how the traditional new year is observed around the Region.

Songkran, otherwise known as the Water Festival, is an aspect of culture of the Tai or Dai people inhabiting much of the Southeast Asian Region. Held to celebrate the traditional new year, the occasion marked by the throwing and sprinkling of water goes by a variety of names.

The Thais call it Songkran and celebrate it big time in a water festival that has become one of the Region’s greatest hits. The Laotians call it “Pi Mai Lao,” literally Laos’ New Year. The people of Myanmar refer to it as “Thingyan,” while the Cambodians call it “Chaul Chnam Thmey.” In Malaysia and Singapore, it is known as “Puthandu.”

China also has a water festival that celebrates the new year in the Tai or Dai calendar. The Dai people are one of several ethnic minorities inhabiting Xishuangbanna in China’s southern Yunnan Province. The region bordering Myanmar and Laos is known for Dai culture, beautiful temples, and pristine rainforests. To promote tourism, the Water Splashing Festival is held in mid-April and lasts three to seven days depending on the location.

In Cambodia, “Kralan” or “khao Lam” is favorite holiday food during the annual water festival. The popular dish is made of sticky rice mixed with grated coconut, red beans, and coconut milk roasted in specially-cut bamboo sections. Meantime, in Myanmar it’s time for “Mont Lone Yay Paw,” the most popular, iconic dish prepared to usher in the Thingyan Festival. Mont Lone Yay Paw is sticky rice balls with filled centers topped with fresh grated coconut. It’s a must-try local food if you’re in Myanmar during the holiday season. And if you happen to be in Malaysia, look for the sweet and delicious holiday food Onde Onde. The traditional green-colored balls of rice cake come coated with fresh shredded coconut.

In Myanmar, the most widely celebrated Thingyan Festival coincides with the Padauk blossom time, Padauk being the national flower. The streets are ablaze with golden blossoms of Burmese Padauk during the traditional new year season, and the people of Myanmar lovingly refer to them as “Thingyan flowers.”

For the citizens of Myanmar, meeting up with family is of the utmost importance during Thingyan. The traditional new year is a public holiday that usually lasts ten days to allow the people plenty of time to celebrate the water festival and seek reunions with loved ones. There was a little hiccup leading to Thingyan 2017 after the Government decided to shorten it to just five days. More than 500 workers took to the streets, and succeeded in restoring it to the normal ten-day practice.

In Thailand, the Government has tried multiple ways and means to ensure safety and solve traffic woes that Songkran brings. This year it enacted a law banning pickup trucks from carrying passengers in the open truck bed and inside the extended cab. The ban infuriated many travelers affected by it, and the protests ranging from sarcastic responses to insults went viral on social media. Opponents of the ban succeeded in relaxing, but not abolishing, it at least for now. Bizarre behavior continues to make headlines. Last year a shirtless Englishman was arrested throwing water in the faces of revelers and charged with inappropriate dress. Songkran traffic can be a total nightmare. So, drive safely and responsibly. Happy New Year!