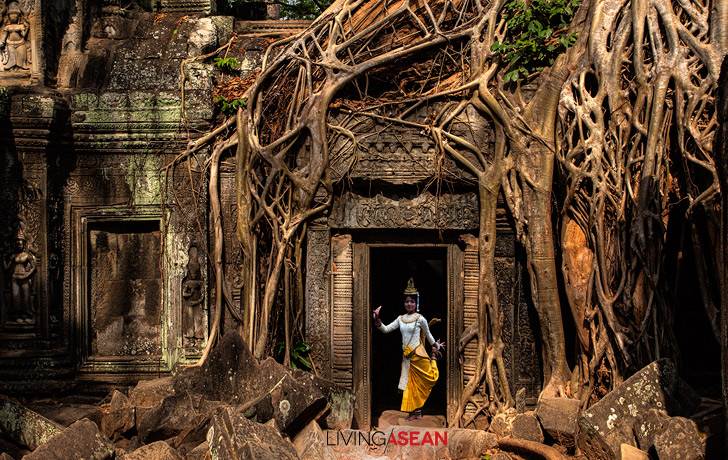 Founded on the Indian Subcontinent by the Buddha around 500 BC, Buddhism is a widely followed religion across Southeast Asia, especially the Mainland. Temples and the Sangha, communities of monks, nuns, novices and laity, play a critical role in preserving good practice and his teachings to the present day. Here are 9 sacred places around the Region to visit on your long journeys through life.

One of the largest and most resplendent religious monuments in the world, Angkor Wat was built by King Suryavarman II who ruled the Khmer Empire in the 12th century. Originally dedicated to the Hindu god Vishnu, it was gradually transformed into a Buddhist temple around the turn of the century. The temple complex sits on 1.6 million square meters (about 400 acres) of land in Siem Reap, a province on the northern shore of Tonle Sap in central Cambodia. The enduring pride of Khmer architecture was constructed of sandstone adorned with a breathtaking richness of sculptures in bas-relief. It was inscribed on the List of UNESCO’s World Heritage Sites in 1992. The ASEAN Tourism Forum in 2012 made Angkor Wat and Borobudur (in Indonesia) sister sites as part of an effort at promoting cultural tourism in the Region. Among the world’s largest religious sites, Borobudur in central Java is on a par with Bagan in Myanmar and Angkor Wat in Cambodia. Built in the 9th Century, it was a center of Buddhism at the time the Srivijayan Empire became the first kingdom to dominate the islands of Sumatra and neighboring Java. Borobudur is representative of Javanese architecture that blends the concept of Nirvana, the final goal of Buddhism, with the native custom of venerating ancestors. Located on a highland 40 kilometers from Yogyakarta, the magnificent Borobudur temple overlooks rolling hills, lush forests and twin volcanoes. Its nine-tiered floor plan consists of six square platforms placed one above the other, three circular atriums at the top, and pagodas. They are decorated with beautiful reliefs and a total of 504 Buddha statues. Guinness World Records make in the world’s largest Buddhist temple, while UNESCO added it to the World Heritage Sites in 1991.

A sea of temples and pagodas in central Myanmar is a wonder to behold. The ancient city of Bagan was capital of the Pagan Kingdom from the 9th to 13th Centuries. During that time, thousands of Buddhist temples, dome-shaped shrines and monasteries were constructed. Among them, the Ananda Temple was built by King Kyanzittha in 1105 A.D. It’s very well preserved and accessible to visitors. Inside the most revered temple of Bagan, huge Buddha statues stand facing east, west, north and south in the corridors illuminated by natural light. The building is built of white sandstone that’s characteristic of ancient Mon architecture. THE TEMPLE OF THE EMERALD BUDDHA (WAT PHRA KAEW)

Located on the grounds of the Grand Palace, the Temple of the Emerald Buddha was consecrated in 1784 during the reign of King Rama I, founding father of the Rattankosin Kingdom and the first monarch of the reigning Chakri Dynasty. Inside, the Emerald Buddha reposes on an elevated altar surrounded by gilded décor. The bright green stone statute of the Buddha is regarded as the palladium of the Kingdom of Thailand. The royal temple stands embraced by dome-shaped shrines, pagodas, and religious halls. The corridors are adorned with mural paintings depicting episodes from Ramayana, a Sanskrit epic of ancient India. It’s now one of Bangkok’s most popular tourist attractions.

The historic 99-meter-tall Shwedagon Pagoda stands surrounded by a sea of 68 smaller stupas. It’s also known as the Golden Pagoda for the gilded dome-shaped structure that dominates the Yangon skyline. Legend has it that the large religious monument was built some 2,500 years ago, but archeologists put its beginning between the 6th and 11th Centuries based on evidence of Mon temple architecture. Shwedagon is regarded as the most sacred pagoda for the people of Myanmar. As gestures of respect, visitors are required to remove their shoes on entering the temple compound. From past to present, people have donated gold and gemstones that go towards restoring the pagoda to its original splendor. “Shwe” is a local word for gold, while “Dagon” is the old name of Yangon.

THE TEMPLE OF DAWN (WAT ARUN)

One of the most ancient temples in Thailand, the Temple of Dawn is located across the river from the Temple of the Emerald Buddha and the Grand Palace. The Buddhist temple that existed on the site was originally called Wat Makok. As the Ayudhya Period ended and Thon Buri became a new capital, the temple was renamed Wat Chaeng. In the early Rattanakosin Period, the name was changed to Wat Arun as a symbol of the first light of a new day. The Buddhist temple is renowned for its colorfully decorated pyramidal structures. The tapering conical towers, known as Prangs, are adorned with a mosaic of ceramic tiles and glass that shimmers in the sunlight. The Prangs of Wat Arun are best viewed from across the river. They were on the logo of the Bangkok Art Biennale that just ended.