Thailand Has Widest Income Inequality in the ASEAN 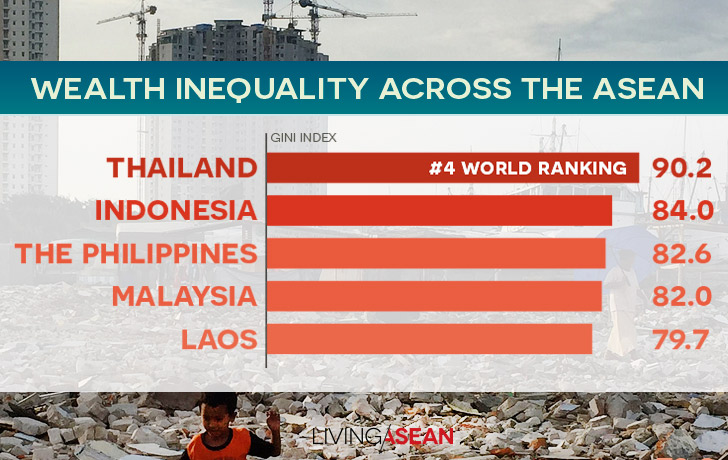 Thailand Has Widest Income Inequality in the ASEAN

It’s an inconvenient truth that doesn’t bode well for the future. But let’s face reality in an honest way. The Global Wealth Report 2018 published by the Credit Suisse Research Institute showed Thailand scoring 90.2 on the Gini coefficient (also the Gini index), making it a country with the widest income inequality in the ASEAN, and one of four worst performers on the world chart, which include Ukraine (95.5), Kazakhstan (95.2), and Egypt (90.9). The Gini coefficient, named after Italian demographer Corrado Gini, is a statistic measure of the degree of inequality represented by a set of values from zero to 1, or 100 depending, zero being perfect equality in either income or wealth. Hence, the higher the values, the greater the wealth is being more unevenly distributed. As for Asia, there is a substantial degree of polarization between high-income countries (Hong Kong, Japan, and Singapore) and the low-income countries (including Bangladesh, Indonesia, Pakistan, and Vietnam). On average the Asia-Pacific region (excluding India and China) has a high income inequality value of 90.1 on the Gini index.

Across the ASEAN membership, Indonesia comes in second at 84.0, followed by the Philippines at 82.6 on the Gini index. Like in Thailand, only 0.1% of Indonesian and Philippine adult populations are members of the over-1 million USD wealth range.

Myanmar has a Gini index value of 58.2, making it a country with the narrowest income gap in the ASEAN. Interestingly, 98.9% of its adult population belongs in the low-income wealth band with 0% in the 100,000 USD range and beyond.

The Gini coefficient shows the statistical dispersion of income or wealth among the citizens of a country. It’s the most common method of measuring inequality. The scale ranges from zero to 1, or 100 depending. A Gini coefficient of zero refers to perfect equality in the data being analyzed, while 1 (or 100) means there’s a maximum inequality. Gini values are key to understanding a wealth pattern that gives us an idea where to start to tackle the problem.