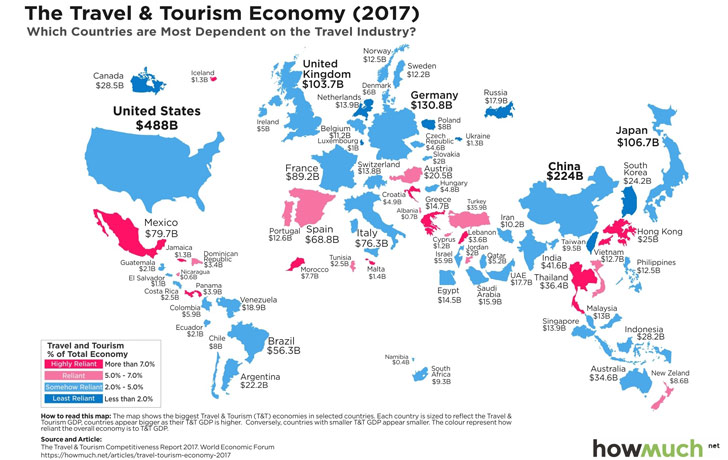 Do you know which ASEAN nations have the largest tourism industry? See the map below for the varying degrees of dependency based on the percentage of GDP taken up by the travel and tourism industry. The Travel & Tourism Competitiveness Report 2017 by the World Economic Forum revealed a growing trend of traveling. On the big picture, selected countries have attributed their economic growth to increased tourism spending. The top 5 nations with the largest tourism industries are the United States whose tourism industry is worth $488 billion, China($224B), Germany($130.7B), Japan($106.7B), and the United Kingdom($103.7B).

For the ASEAN Region, Thailand is the largest travel and tourism economy with $36.4 billion. The kingdom ranks third among the top 5 most tourism-reliant countries with tourism trade constituting 9.3% of overall GDP.

The report also shows the Travel and Tourism Competitiveness Index which ranks 136 countries worldwide based on their performances on 14 criteria, including safety, ICT readiness, international openness, price competitiveness, and transport infrastructure. Singapore emerges the most competitive among the ASEAN countries and ranking number 13 on the overall index for 2017, followed by Malaysia and Thailand ranking number 26 and 34, respectively. Vietnam makes the list of the most-improved countries in this industry having made great improvements from the last report in 2015.

Over all, countries in the ASEAN Region fare badly on the Environment Sustainability Index with only two countries, namely Singapore(number 51) and Laos(98),making the Top 100 Chart. The rest don’t make the cut. They include the Philippines (number 118), Thailand(122), Malaysia(123), Vietnam(129), Cambodia(130), and Indonesia(131).