Power of Dharma (and Nature) 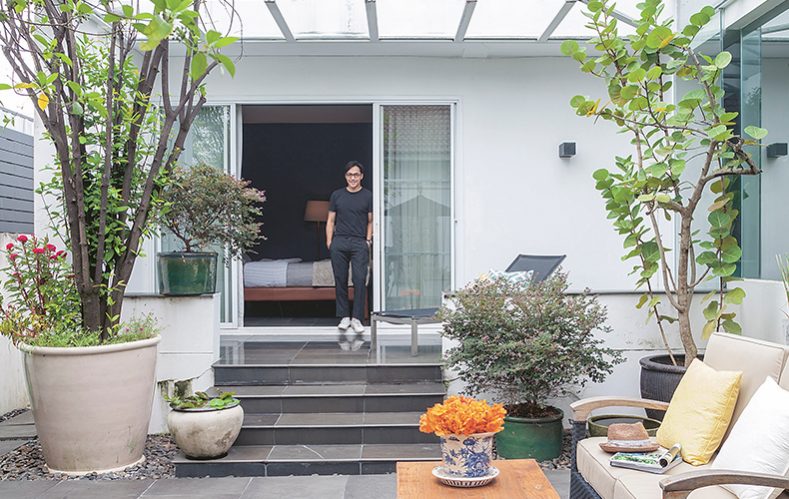 Power of Dharma (and Nature)

This beautiful house belongs to Bhalangtham Klomthongsuk, a well-known drama series organizer and television personality. The single-level home plan takes up most of the 200-square-wah land space with modern living amenities and a private retreat amidst nature. The peaceful setting fits the lifestyle needs of the homeowner whose name translates as the power of dharma.

Showing us around the property, he said:

“On first seeing, I liked the way it differed from the style typical of modern-day housing developments where everything looked very similar. Besides, I’ve always preferred a single-level floor plan. Initially, I didn’t plan on doing any remodeling for five years, kind of waiting for Arty (nickname of his son Natewut) to grow big enough to have his own room. But, I didn’t want my elderly Mom to climb up and down the stairs any more. So, here we are! This house offered many advantages. It was fully functional for an old home. There wasn’t much damage to repair to begin with, except a few updates here and there to make home life easier. That was pretty much it.”

“The most outstanding part of the house is a small courtyard garden at the center of the floor plan.  The open space offers refreshing environment in the middle of lush foliage. There’s an outside sitting area with a private garden view.”

From the main entrance, a hallway leads to a corridor that connects to the left and right wings of the house. The right wing contains a kitchen and dining room, while the left wing has a bedroom with private bath that has since been transformed into a multi-use space. The most outstanding part of the house is a small courtyard garden at the center of the home plan where Bhalangtham’s bedroom is located. The open space offers refreshing environment in the middle of lush foliage. There’s an outside sitting area with a private garden view.

The furnishing and decoration is left in the good hand of interior designer and close friend Suranart Lerdkunakorn. Knowing the homeowner’s taste, Suranart creates a mix-and-match interior combining chic vintage ornamentation with newer furniture and decorations from different eras and styles. On the whole, home décor and accents give a hint of Eastern culture that makes the interior warm and welcoming. Strong, deep colors make the interior room visually interesting. Asked to elaborate on this, the designer said:

“Bhalangtham likes the metallic duck-head green and navy blue; hence much of the interior is pained dark shades of color. Together, they bring renewal and nature to the indoor living spaces. As for furniture and decorations, a chinoiserie dining table that’s a gift from the previous homeowner comes in handy to reduce the stiffness of modern home design. Elsewhere, vintage décor ideas imported from Bhalantham’s old house complement a look that’s stylish and relaxing.”

A perfect amalgam of chinoiserie, vintage, modern, and classic styles is a distinctive feature that gives the house meaning and character. Combine that with a courtyard filled with lush foliage of the container garden, and the benefits are amazing. Despite its small size, the patch of greenery serves as the lungs of the house, a condition that ensures everyone wakes up fresh and happy every day.