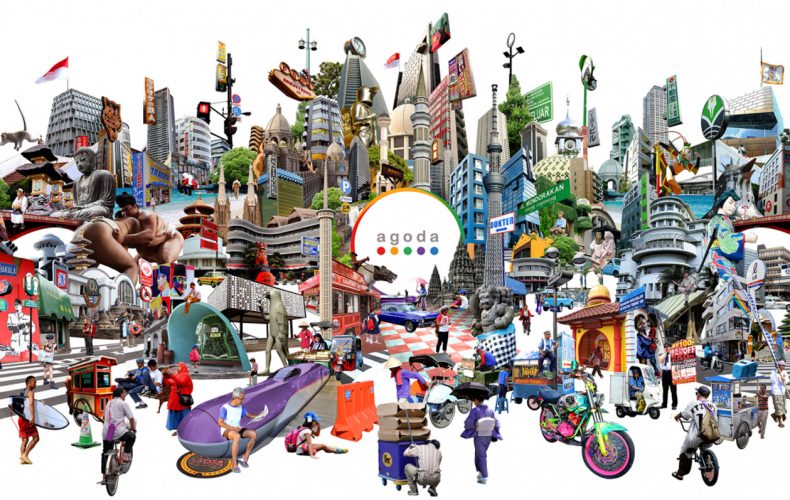 Agoda.com (of Agoda Company Pte., Ltd.) is one of the largest online booking networks, its more than 100,000 hotel offerings spanning the globe. In collaboration with Singapore’s Saatchi & Saatchi agency, Agoda has created “Agoda Base Camp,” a vibrant and innovative Indonesian tourism ad campaign designed to attract foreigners and Indonesians alike. Pariwat, known for his iconic photo collage art work, was a natural choice to present the campaign to viewers worldwide.

Base Camp features three staples of Indonesian tourism– Jakarta, Yogyakarta, and Bali – adding perennial favorite Tokyo, Japan, with pictures of buildings, houses, and people representing local culture and lifestyles from every corner of those cities. The images were cut, mixed, and laid out in Agoda’s five primary colors to illustrate each destination’s highlights and character, as shown here.

Jakarta stands out for its mix of old and new. Here old and new architectural styles appear almost as reflections of each other, different, but fitting together in a charming way.

Yogyakarta/Jogya stands out for its mix of old and new. Here old and new architectural styles appear almost as reflections of each other, different, but fitting together in a charming way.

Bali is highlighted by nature itself, with its gorgeous beaches and healthy activities. This pictorial representation of the island also illustrates ghost worship, animist ceremonies presided over by shamans in colorful robes, and a native fascination with the occult.

Tokyo shows a mix of contemporary life and technological progress with a powerful sense of cultural preservation. This collage is presented in the uniquely Japanese “manga cartoon” style, split into viewing panels as in a comic book.

Pariwat spoke with us about how this four-city promotion came to be represented in his work. “We did extensive research on the highlights and character of each city, looking for ‘what’s hot and what’s not,’ to see what would get folks hooked on going there. Scheduling was a big challenge: we only had half a month to fly everywhere and take our pictures, so had to be creative, sometimes using pictures taken by others, or hotel pictures from Agoda, and these were often hard to match and balance with what we already had.”

The Base Camp campaign will use both printed ads and key visuals in video footage taken by Agoda and enhanced with animation.